While the Kyle Rittenhouse trial has largely captured the media's attention for the last few weeks, another murder trial of significant public interest has been happening at the same time.

Ahmaud Arbery, a 25-year-old black man, was shot and killed by Gregory and Travis McMichael, a father and son pair, in Brunswick Georgia back in February 2020. Their neighbor, William Bryan Jr., has also been charged. The trio of white men is accused of chasing down and murdering Arbery, who was jogging through the neighborhood.

The prosecution rested its case on Tuesday, CNN reports:

Donoghue's autopsy report from April 2020 did not detail the order in which Arbery's gunshot wounds happened. But he testified Tuesday that he could do so now, combining the autopsy with widely seen cell phone video taken by Bryan. Arbery and Travis McMichael can be seen in the video wrestling over the firearm before the shooting.

Though three shots were fired, only the first and third struck Arbery, Donoghue testified. The first not only grazed his right wrist—hitting an artery and causing severe bleeding—but also struck his center chest, he said.

While a tourniquet could have remedied the wrist injury, nothing could be done on scene to save Arbery's life after either of the torso wounds, Donoghue said.

"It could be, yes," Donoghue answered to both questions.

Attorneys for Travis McMichael say their client sought first to scare off Arbery and "de-escalate," firing as Arbery got close and fearing that the unarmed man would take McMichael's weapon. Prosecutors contend that McMichael cannot claim self-defense because he, his father and their neighbor were the aggressors—pursuing Arbery in their trucks and then confronting him in their coastal Georgia neighborhood of Satilla Shores in February 2020.

The defense previously tried to bar Al Sharpton from sitting with the family of the victim, arguing unsuccessfully that this amounted to jury intimidation.

While the Rittenhouse trial, which increasingly looks like it may result in an acquittal, has been wrongly framed by some in the media as an issue of racial animus, the Arbery case is much more straightforward: Three white men chased down a black man who had done nothing wrong and killed him. He didn't have a gun, and he wasn't threatening them. It's much easier to argue that the McMichaels were the aggressors—though ultimately, the jury will decide.

Jedediah Bila is a Fox News pundit and a former host of The View. On Tuesday, she appeared on her old program as a remote guest to plug her new book. The conversation went south very quickly when host Joy Behar brought up the fact that Bila is unvaccinated, which necessitated the remote setup.

Bila explained that she did not get the vaccine because she has a "medical exemption to the vaccine" co-signed by three different doctors. "I am not a candidate for this vaccine," she said. She further clarified that she was not anti-vaccine in general, but because of her own health issues—and her natural immunity from a prior COVID-19 infection—it did not make sense for her to get the vaccine.

This perfectly sensible statement did not seem to alarm the hosts, but when Bila brought up the (unfortunately true) fact that the vaccines do not prevent transmission of COVID-19, Behar and the audience lost it.

Jedediah Bila was just on #TheView to promote her new book and things just went South. Like way South past the Mexico border South. The cohosts basically said she was too dangerous to be on air. pic.twitter.com/kt8nFKZid2

Sunny Hostin accused Bila of prioritizing "your personal freedom over the health and safety of others" and stated that The View should not even allow Bila to voice such "disinformation." This was a remarkable claim since nothing Bila said was remotely false. Nevertheless, Daily Beast columnist Wajahat Ali celebrated Hostin for shutting down Bila.

Well done @sunny. Anti vaxxers and others who peddle dangerous disinformation don't have a right to mainstream platforms. This is how it gets normalized. Glad it was shut down. Jedediah Bila is neither a victim nor martyr.

Again, Bila did not make any false claims. Her claim that natural immunity from a prior infection gives her robust protection from COVID-19 was true. Her claim that the vaccines—while terrific at reducing severe hospitalization and death—do not prevent the spread of COVID-19 was also true. 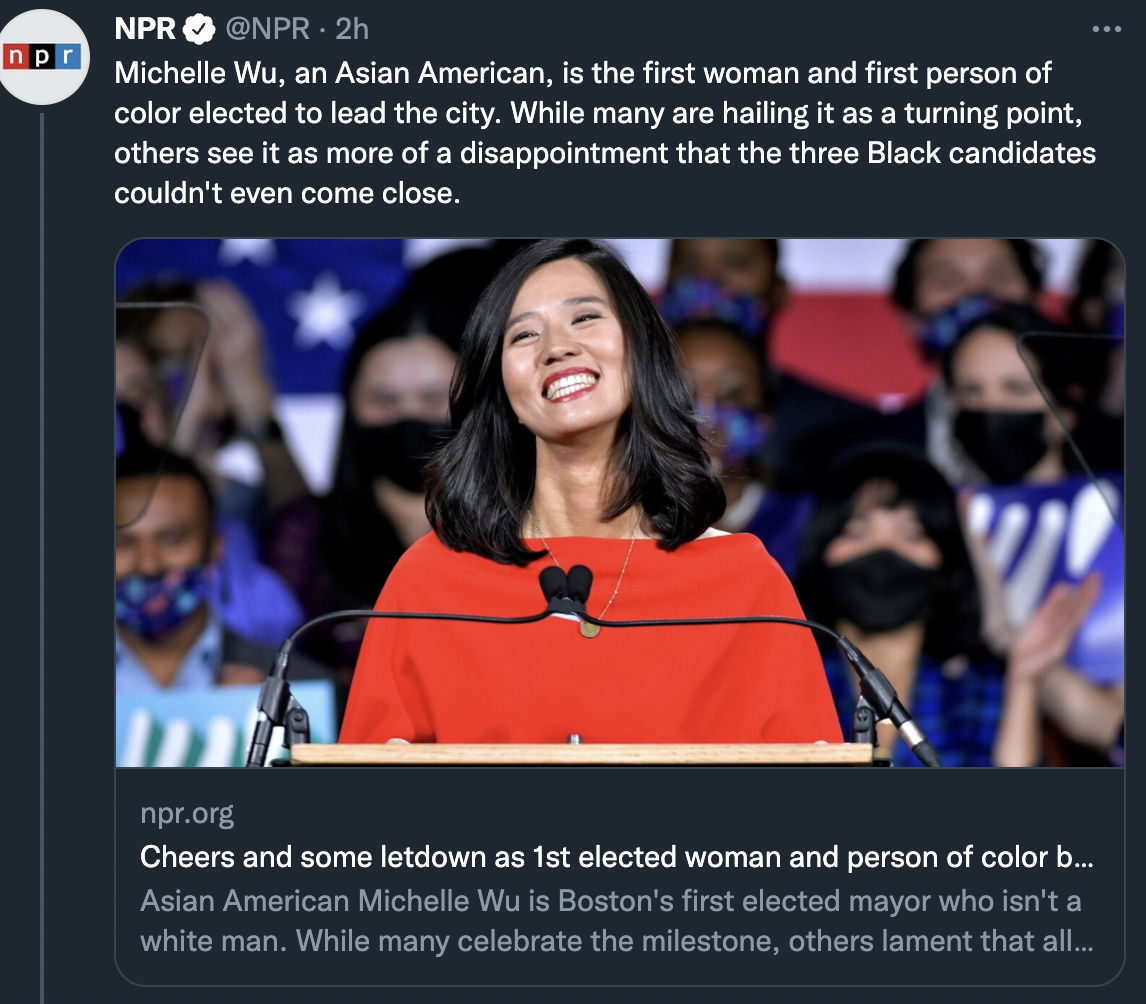 "We realize we don't always get things right the first time, and our previous tweet/headline misrepresented the story," wrote NPR. "We deleted the previous tweet, which was causing harm, and have updated the story."

The replacement tweet was only marginally better, and the real issue was that the entire premise of the story itself was hopelessly flawed. The initial tweet did not misrepresent the story at all: It was an unending parade of outrage from social justice activists of color that Bostonians had dared to elect an Asian woman. This weird obsession with race is tokenizing and insulting, yet unfortunately has come to dominate NPR's coverage, as noted by journalist and podcaster Katie Herzog.

I oppose vaccine mandates, but I am individualist who believes in limited government.

How can natcon conservatives oppose these mandates?

Aren't they just using the state to assert the "common good" above individual autonomy—aka what y'all clamor for?