Hope means different things, depending on who you ask. Some say hope is inherent to the way someone carries himself in the face of adversity. Others think of hope as a form of superstition, an unfounded belief that everything will be alright in the end. The more cynical among us call hope outright foolishness or naivete. During the COVID-19 pandemic, our capacity to find hope has been regularly tested by lockdowns, the false promises of bureaucrats and the public health establishment, the devastation to people's livelihoods, the death toll, and the crushing depression that comes with all the above. People could be forgiven for losing sight of hope that the pandemic will ever end.

Politics, too, certainly has a lot of people feeling hopeless. President Joe Biden's victory over Donald Trump in the 2020 election spurred a mob to storm the Capitol to try to stop the certification of the election. You could call the incident many things, but at its core, January 6 was an act of desperation by people who lost hope in democracy, in our constitutional processes, and in self-government. You don't expose yourself to federal criminal charges for fun. You do it because you've embraced the lie of "The Flight 93 Election."

Hope is how you look beyond the trials of the moment to what comes after. It's what pushes an activist to stand alone on a street corner with a sign bearing a slogan, carrying with it a belief that one person might be moved enough by it to join the cause. Hope is why we vote. Virginia Governor–elect Glenn Youngkin faced the monumental challenge of flipping a blue state that Biden won by 10 percentage points. Did Youngkin spend his final days campaigning saying that, unless he won, the state's election system was "rigged" or that the vote would be "stolen"? No, because hope was enough. 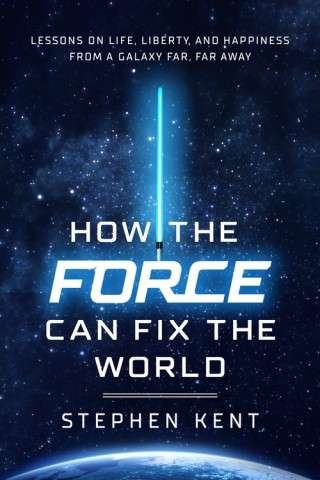 One of my favorite champions of hope in the realm of fictional revolutionary politics is Princess Leia of Star Wars. She's got a treasure trove of quotes on the subject that illuminate just why a politics rooted in hope, not paranoia and doom, is exactly what our culture needs right now. Her hope is firm as stone, resolute, and grounded in truth. It's a model for the kind of hope we need in order to defend liberty. In my upcoming book, How the Force Can Fix the World, I explain why this matters for preserving not only our society and way of life, but our personal happiness as well.

Grand Moff Wilhuff Tarkin was never going to spare Alderaan. When Princess Leia misled him about the location of the rebel base in Star Wars: Episode IV – A New Hope (1977), naming the mostly desolate world of Dantooine as the location of the base, Tarkin had already planned a murderous demonstration of the Death Star's power for all the galaxy to see. Alderaan was Leia's home. Her parents and fellow rebels, Bail and Breha Organa, were on Alderaan when Tarkin gave the order for the massive orbital space station to fire on the planet. Millions upon millions of lives were snuffed out in an instant. The Death Star, which the Rebellion had risked everything to stop, was now fully operational. Tarkin, whose faith in the Death Star was rooted in the cynical goal of solidifying the Galactic Empire's hold on power through absolute fear, had made his move and put all his chips on that belief.

He was wrong. I've always marveled watching A New Hope and taking note of Princess Leia's poise and resoluteness throughout that original film. While Luke Skywalker is a beacon of hope to audiences in his own way, Leia strikes me as unique. After escaping the Death Star with Luke, Han Solo, and Chewbacca, it's Leia who comforts Luke for his loss of Obi-Wan Kenobi. He looks shattered. Leia, on the other hand, having just lost everything in the most literal sense, remains as motivated as ever. She has the eye of the tiger from start to finish.

What Our Future Vision Says About Us

We've been living through some seriously dark days during the pandemic. It's no surprise that mental health professionals are seeing an unprecedented spike in anxiety, depression, and suicides across multiple age groups and demographics. Political systems were strained before the pandemic even began. Populist movements and authoritarian leaders have risen across the globe and chipped away at the democratic consensus that has defined the post–World War II order. In the United States, political violence has flared to levels not seen since the tumultuous 1960s.

No one expected to see a pandemic, riots, and an attack on Congress. This isn't the future I dreamed of. Maybe you grew up believing mankind would be in space by now, living like The Jetsons or even blasting through hyperspace like Han Solo aboard the Millennium Falcon to new and exciting worlds. The lack of sci-fi technology becoming reality can be kind of demoralizing. We thought we'd have flying cars, but instead we got curbside pickup at Starbucks.

It's easy to forget that things are getting better all around us in ways that are hard to see. Since my birth in 1989, income per person in the United States has risen 67 percent, life expectancy is up 4 percent, and food supply has increased by 7 percent. When my father was just a boy, mankind was putting its feet on the moon for the first time; today we're making huge strides toward manned missions to Mars. Heck, the robotic rovers we've sent to Mars in recent years have uncovered proof that there used to be water on that distant red planet. Once the question was, "Is there life out there in the stars?" Now we've moved on to a new question: Where is that life?

There's a scene in A New Hope with Luke standing in the desert at dusk, watching the twin suns of Tatooine set on the horizon. It's one of the most enduring moments of Star Wars from generation to generation. Luke is just a lonely dreamer looking out on the world and believing there must be more to it than what he can see. Luke is all of us at that moment. It doesn't matter if you're Elon Musk, risking a fortune on a new space shuttle to make it to Mars, or if you're a young girl living in a cramped Chicago apartment with five siblings and a dream of making it big in Hollywood, lifting your family out of poverty in the process.

Maybe this is hope, or maybe it's the American dream. These things go hand in hand.

Hope Beyond Hope Can Be Poisonous

Hope is a lot of things. It can be personified, objectified, or embodied in places, faith, and prose. But the most simple definition for hope is that it's to want something you can have, at least in theory. I want very badly to have the Jedi power of levitating objects and moving them around my house with my mind, but I don't have hope of achieving such a thing, nor should I, even in theory. It's not within the realm of possibility. But what if I watched enough YouTube videos made by weirdos living in their mothers' basements, telling me beyond a shadow of a doubt that I'm wrong, and this power is in fact attainable? All I'd have to do, according to these armchair wizards of the web, is watch enough of their videos and wire them some money. There's a good chance that at some point you'll become bitter and angry. After all, someone sold you false goods, hope beyond hope.

This is what happens to Anakin Skywalker when he is told by a supposed friend, Chancellor Palpatine, about the power to control life and death that is known only to the Sith. Anakin, suffering from visions of his wife Padme dying in childbirth, is lured in by a twisted kind of hope we might understand as an intergalactic spin on the snake-oil salesman who travels from town to town hawking miracle cures that almost certainly will let the buyer down.

Just as hope can push the likes of Princess Leia forward through a tragedy like the destruction of Alderaan, hope can also move a desperate and loving husband to spend the last of his savings or sell the house to get that cure from the roving snake-oil salesman. It's not unlike the snake oil hawked by politicians who say all our problems will be solved if we just give them votes and power, warping the minds of people who go to great lengths to follow them. There is a light and dark side to everything.

In the Christian tradition, hope sits alongside faith and charity as one of its core virtues and guiding lights. The notion that God would send his son to mankind in order to deliver them from sin and by extension, damnation, is a significant dose of hope for a people in need of redemption. Absent that guiding light and the possibility of salvation, you'd have masses of people mired in endless cycles of guilt and despair.

Hope here is more than a feeling. It's not something that washes over you and leaves like an emotion. As a virtue, it's something you discover and hold on to for dear life, despite everything the world will throw at you. Hope is the life vest. Hope is the parachute when you've jumped out of a plane. It's like faith. You can become a person who is hopeful (and positive), or you can become cynical, someone who is predisposed to see the worst in people and in the future.

Even worse, absent hope you can devolve into nihilism, a particularly toxic kind of hopelessness rooted in the belief that nothing matters. Most people aren't born this way. It's a learned behavior and one increasingly popular with young people and lauded throughout our popular and political culture. Throughout Star Wars, audiences understand rightly that the Empire is an incredibly evil and morally bankrupt regime. With this being crystal clear, would-be rebels have a choice to make in how they make their stand against the Empire. It's not good enough to simply oppose it. To win, the Rebel Alliance has to do three things: First, let the people of the galaxy know they're not alone in feeling angry about the state of things. Second, let people know that the Empire can actually be beaten. Third, paint a picture of a better future.

The Rebel Alliance does all of these things. In our own world, the majority of successful movements and political campaigns do so as well.

There are more than a few nihilistic factions in American politics today competing for the public's attention and loyalty. Whether they wear black masks or don red hats, the message is the same: The future is bleak and nothing matters. We know this isn't true. While humanity is messy, we're living in the best time in human history to be alive, even during the pandemic. There's a great deal of cause for hope, even as we face down the twin fears of uncertainty and disorder.

As Leia said in Star Wars: Episode VIII – The Last Jedi, "Hope is like the sun, if you only believe in it when you can see it, you'll never make it through the night."