An insufficient supply of ICU beds is one of the acute crisis points of the pandemic. When hospitals run out of room to treat patients who need the most help, doctors and hospital administrators must make difficult triage decisions. This affects not just COVID patients but anyone else who might be in urgent need of medical care—car crash victims or those who've had heart attacks—and it almost certainly means that some people will die who otherwise may have survived.

It's a crisis that has been made worse by outdated and ineffective government regulations—known as "Certificate of Need" (CON) laws—that actually reduce the number of available hospital beds by requiring that hospitals get permission from the state before adding capacity.

In Alabama, which is one of 27 states that subjects the supply of hospital beds to CON oversight by the state, we're now seeing some of the consequences of these rarely thought-of policies. While the surging number of serious COVID cases there and elsewhere across the country is largely the result of unvaccinated Americans being hit by the highly contagious delta variant, a restricted supply of hospital beds is not helping.

Mitchell's findings suggest that either the virus is specifically targeting states with CON laws—highly unlikely—or else those laws might be worsening the crisis.

In Alabama, specifically, there have been 29 days for which bed utilization was above 70 percent in the past month. Over that same period, the average non-CON state experienced just 6.9 days above 70 percent. 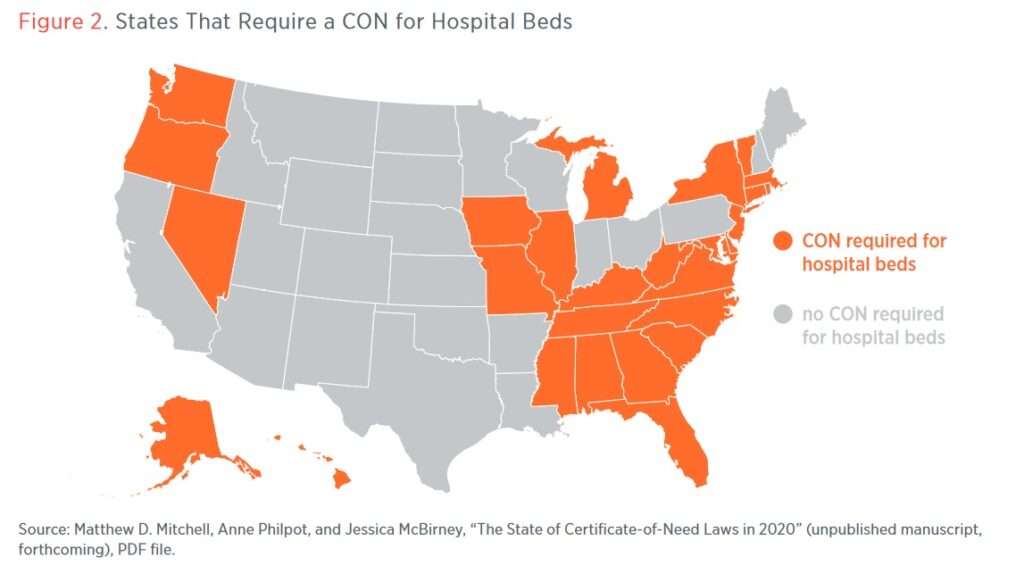 CON laws illustrate the importance of having good policy in place before a crisis like a pandemic arises. And it goes beyond the number of hospital beds. Other research conducted by Mitchell and his colleagues have found that states using CON laws to regulate health care have fewer hospitals, fewer dialysis clinics, and fewer surgical centers, among other things.

That translates into higher costs for patients, who also have to travel farther to get treatment. The average 30-day mortality rate for patients with pneumonia, heart failure, and heart attacks in states with CON laws is 2.5 to 5 percent higher even after demographic factors are taken out of the equation.

"Access is the biggest issue," says Mitchell. "It illustrates the difficulty in assessing 'need' from the perspective of a central planner. They have no skin in the game and are typically uninformed on supply, demand, and cost."

Politically connected hospitals can also use CON regulations to smash smaller competitors, often to the detriment of patients. As Reason has previously reported, a CON board in Virginia has blocked a hospital from building a needed neonatal ICU, even after an infant died at the hospital, because a nearby hospital complained about unwanted competition. A similar board in Michigan tried to restrict cancer treatments merely to protect the state's largest health system from competition.

In Mississippi, doctors who wanted to make house calls during the pandemic were blocked from doing so because state regulators had, in 1981, arbitrarily and permanently capped the number of licenses for home health services under the bizarre rationale that no more would ever be needed. If only those central planners had knowledge of a pandemic that would strike 40 years in the future.

At least 24 states have suspended or abolished various CON regulations for health care providers since the start of the pandemic, according to Angela Erickson, a strategic research director for the Pacific Legal Foundation, a libertarian law firm.

Alabama was one of them. In April of last year, Gov. Kay Ivey, a Republican, issued an executive order that temporarily lifted a wide range of regulations including limitations on letting out-of-state medical professionals work in Alabama and CON rules for hospital beds.

Unfortunately, the consequences of decades of bad policy can't be undone by the snap of a governor's fingers. Hospitals in Alabama likely would have had more ICU beds to call upon if those CON regulations had been lifted long ago, or never imposed in the first place. That's a lesson that state officials should remember when the current crisis passes.