The Los Angeles Press Club today named the finalists for the 2021 Southern California Journalism Awards. I am proud to share with Reason readers and supporters that our writers, producers, and contributors are up for the win in 15 categories across print, online, and broadcast media.

Now in their 63rd year, the Southern California Journalism Awards honor stories published in and about Southern California by a broad spectrum of media outlets and journalists. The Reason Foundation, which publishes this magazine, is headquartered in Los Angeles and has been a member of the LAPC for over a decade. We consider it an honor to have our work critically examined and recognized by members of other press clubs, who hold a range of views and serve as judges.

Without further ado, let's fête some of that good work. Winners will be announced on October 16.

"Every Political Ad Ever," by Reason TV Director of Special Projects Meredith Bragg, Producer Austin Bragg, and Remy, is a finalist for best humor/satire writing in the print/online category and in the broadcast category:

"Coronavirus Cuisine," written by contributor Jacob Grier and published in our August/September 2020 issue, is a finalist in the pandemic reporting category:

A few months into life under COVID-19, we're beginning to figure it out. The combination of state lockdowns and public fear of the virus has gutted the hospitality industry at all levels, taking down businesses of every size and stature. Serving a quality product and cultivating a loyal following is no guarantee of success in the present crisis. Through no fault of their own, many beloved places will shutter forever. But amid the grim news, some of the top bars and restaurants in the country are finding innovative ways to survive. They provide hopeful glimpses into the possible future of a drastically altered dining culture. 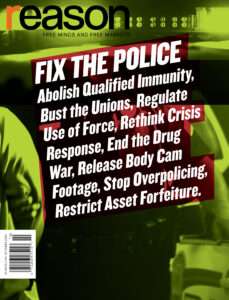 "Against the New Nationalism," written by Reason Managing Editor Stephanie Slade and published in our April 2020 issue, is a finalist for commentary published in a magazine:

Today's nationalists think the federal government has an obligation to actively pursue what they call the "national interest." Any agenda that assumes the existence of such a thing must begin by making a variety of determinations, from who should be allowed to join the polity to whether to privilege the producer's bottom line over the consumer's. And in anything short of a monolithic society, that means overriding some individuals' preferences—and often their right to make choices for themselves.

Reason Editor in Chief Katherine Mangu-Ward is a finalist for magazine columnist based on the submission, "The Dangerous Lure of Political Violence," which appeared in our December 2020 issue:

It's a mistake to conflate bad tweets with revolutionary violence, but it is worth pointing out that in the waning days of the election season, Bhaskar Sunkara, a co-founder of the aptly named Jacobin magazine, tweeted: "I think killing little Romanov children was justified. But it's not surprising why these views are controversial given most people's ethical and moral frameworks."

Sunkara ultimately took down the tweet. But the thing he may have been most wrong about was the notion that most people's moral and ethical frameworks can't accommodate violence in the name of political change. Increasing numbers of Americans see those who disagree with them as subhuman and view politics as a worthy cause for violence, even if they're not ready or willing to do violence themselves. For these new Jacobins, the romance of the guillotine persists.

"Why Does Hollywood Hate Real Estate Developers?" written by Associate Editor Christian Britschgi and published in our August/September 2020 issue, is a finalist for arts/culture feature in the magazine category:

At the heart of all these portrayals is a fantasy of a world without tradeoffs or even annoyances, one in which the only spaces anyone needs or wants are the ones they already have. It's wishful thinking that works from the assumption that housing just exists without having to be provided. Embedded in this worldview is a denial of the fact that preventing development and change means some people inevitably have to go without, while politically connected interest groups profit from higher rents and home values. The politicians who make this all possible are in turn rewarded with campaign donations and easy reelection. The bias is toward the status quo, and a corrupt one at that.

"The Reawakening of the Black Gun-Rights Movement," by contributor Qinling Li, is a finalist in the national political/government reporting category and in the category of news feature over 5 minutes:

"Meet the Trans Activists Fighting for Sex Worker Freedom," by contributor Qinling Li, is a finalist in the gender and society category:

And last, but not least, the Reason Roundtable is a finalist in the inaugural radio/podcast category for talk show. The episode we submitted was one of our most popular of 2020: "The Great Bernie Freakout."

Please join me in celebrating these folks and the excellent work they did in 2020 and continue to do in 2021. I would also like to thank our donors, readers, viewers, and listeners, without whom Reason's work would not be possible.