Establishing a new Civilian Climate Corps (CCC) is one of the items in the Democrats' $3.5 trillion 2022 Budget Resolution Agreement Framework. According to that framework agreement, funding the new CCC would come out of $726 billion being overseen by the Committee on Health, Education, Labor, and Pensions; the $135 billion allocated to the Committee on Agriculture, Nutrition, and Forestry; and the $20.5 billion managed by the Committee on Indian Affairs. The Biden administration has proposed an initial budget of $10 billion for the program. More ambitiously, Sen. Ed Markey (D–Mass.) and Rep. Alexandra Ocasio-Cortez (D–N.Y.) have introduced legislation creating a CCC that would hire 1.5 million Americans and spend $130 billion over five years.

The new CCC would be modeled on Franklin Delano Roosevelt's New Deal Civilian Conservation Corps from 80 years ago. That program, launched in the depths of the Great Depression, eventually hired some 3 million unemployed young American men between 1933 and 1942 to build national park facilities and trails, plant 3 billion trees, and fight forest fires.

Progressives are nothing if not persistent. Back during the Great Recession in 2009, some 80 progressive activist organizations proposed the creation of a Clean Energy Corps that would hire 600,000 Americans to "comprehensively apply cost-effective, energy-efficiency measures—from adding insulation to replacing inefficient boilers—to over 15 million existing buildings." Also in 2009, Rep. Marcy Kaptur (D–Ohio) introduced the 21st Century Civilian Conservation Corps Act that aimed to "employ unemployed or underemployed U.S. citizens in the construction, maintenance, and carrying on of works of a public nature, such as forestation of U.S. and state lands, prevention of forest fires, floods, and soil erosion, and construction and repair of National Park System paths and trails." Kaptur has since reintroduced her bill in every subsequent session of Congress.

In June 2020, congressional Democrats released their Solving the Climate Crisis report, which outlines their "action plan for a clean energy economy." The report called for Congress to reestablish the Civilian Conservation Corps and to create a Climate Resilience Service Corps that would engage in such efforts as reforestation and remediating abandoned mines and oil wells.

On January 27, President Joe Biden issued an executive order entitled "Tackling the Climate Crisis at Home and Abroad" that, among other things, directed the U.S. Department of Agriculture (USDA) to develop a strategy to create a Civilian Climate Corps. The new CCC would, among other things, "mobilize the next generation of conservation and resilience workers and maximize the creation of accessible training opportunities and good jobs" with the goal of restoring public lands and waters, increasing reforestation and carbon sequestration, protecting biodiversity and addressing climate change.

The congressional Democrats are basically correct when they assert in their letter that "2020 was the worst fire season on record, burning over 10.2 million acres and costing over $16 billion in damages and $3 billion in suppression costs." U.S. Geological Survey ecologist Jeremy Littell and his colleagues find that there have been three eras with respect to the amount of area burned in the western U.S.: Extensive burning declined from the 1920s and '30s in part due to more vigorous fire suppression activities in the '50s, '60s, '70s, and '80s, and then began to rise again after 1990.

The 2020 burned area figures calculated by Littell in the chart below for my chapter on how insurance could be used to manage fire risk in California in Adapt and Be Adept were provisional. By the end of the year, a record of 9.4 million acres had burned in the 11 western states cited in his earlier trend analysis. The Intergovernmental Panel on Climate Change's new Sixth Assessment Report (AR6) notes, "There is medium confidence that weather conditions that promote wildfires have become more probable in Southern Europe, northern Eurasia, the USA, and Australia over the last century."

Besides the contribution of climate change to increased wildfire risk, increased forest density is responsible for the build-up of fuels in our national forests. A U.S. Forest Service article recently reported that 58 million of the 193 million acres that it manages need thinning and prescribed burning to restore natural tree density to improve tree health and mitigate wildfire risk. The estimated cost: $65 billion. 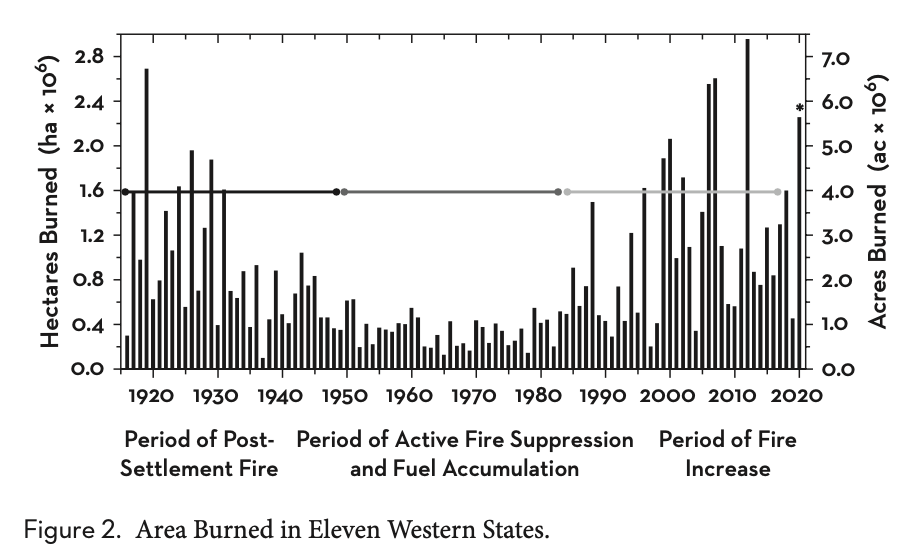 Are damages in the U.S. from climate change actually rising? Yes, if one simply totes up monetary losses. The Democrats' letter notes that "the United States experienced 22 billion-dollar weather and climate disasters in 2020, shattering the previous annual record of 16 events." These data derive from the National Oceanic and Atmospheric Administration's (NOAA) database that has been tracking since 1980 weather and climate events that cost at least $1 billion dollars in losses.

However, in recent congressional testimony, University of Colorado environmental science policy researcher Roger Pielke Jr. explained that the NOAA data cited in the congressional Democrats' letter "actually shows a combination of poor methodology and the consequences of a growing society, with more people and property in locations exposed to loss from extreme weather. It is not an indicator of climate change." The NOAA methodology fails because it cannot tell you if the weather is really getting worse or if there is just more new stuff—houses, businesses, roads—for the usual storms to destroy, argued Pielke. The Democrats' letter also observed that in 2020, "the U.S. experienced a record-breaking 30 named tropical cyclones, 7 of which became billion-dollar disasters—also a new record."

In his testimony, Pielke noted that the picture of U.S. weather damage trends that "emerges is very different than that conveyed by the misleading NOAA dataset." In describing those trends, he and his colleagues aim to account for "the economic impacts of floods, hurricanes and tornadoes, considering growth in wealth and exposure." This process of normalization adjusts historical economic damage from extreme weather to remove the influences of societal change from economic loss time series to estimate what losses past extreme events would cause under present-day societal conditions.

Pielke finds that flood damage has been falling as a percent of U.S. GDP for more than a century. 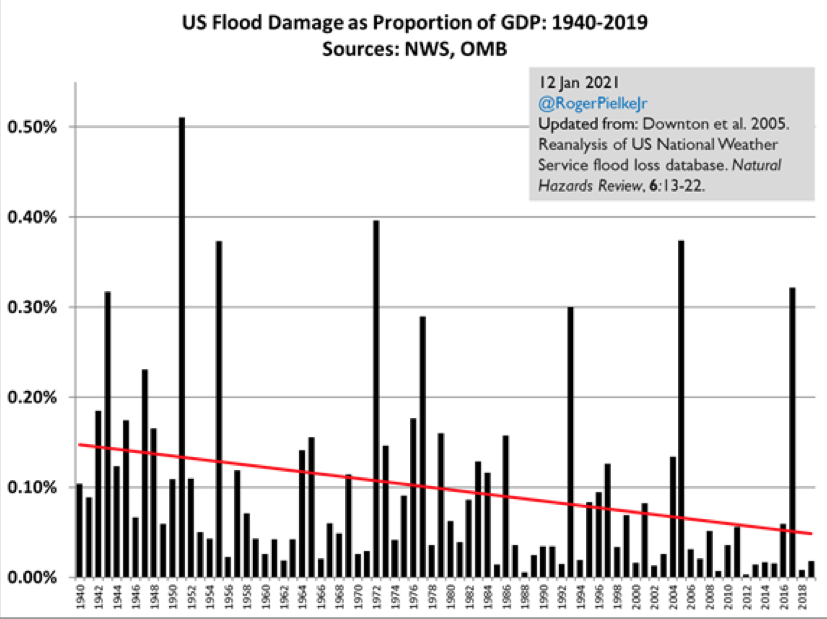 When taking into account increases in both population and values of property exposed to storms, the normalized losses from hurricanes have been flat. 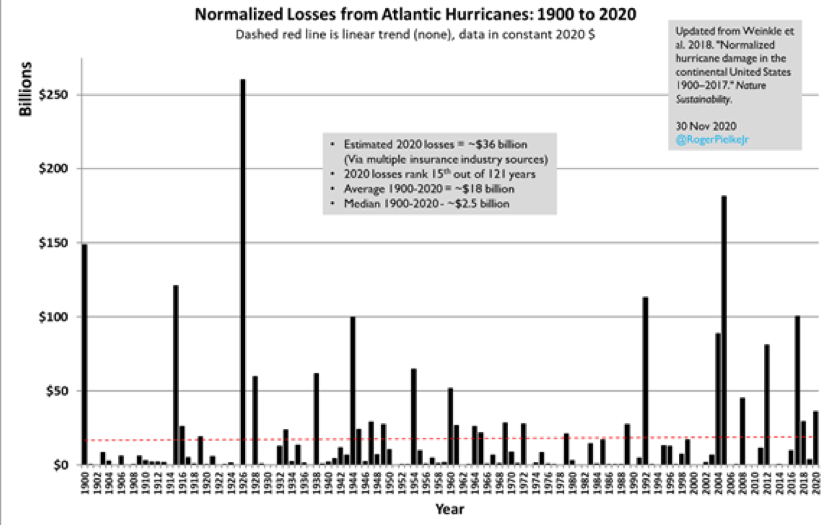 And normalized losses from tornadoes have also been falling. 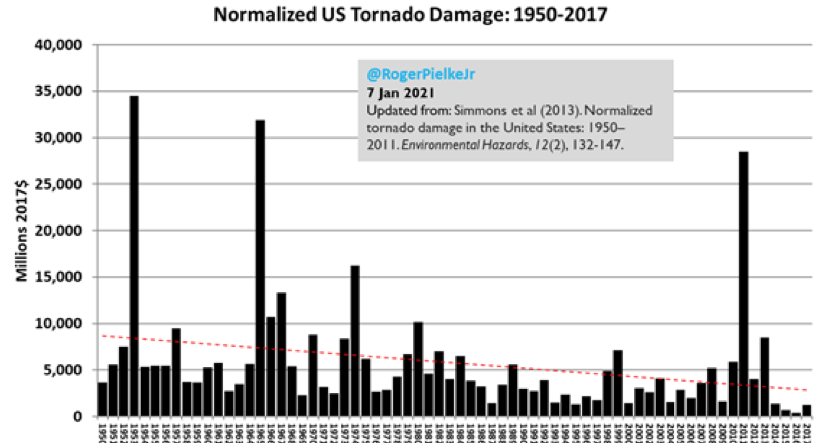 Pielke also shows that the number of hurricanes striking the continental U.S. has not been increasing. 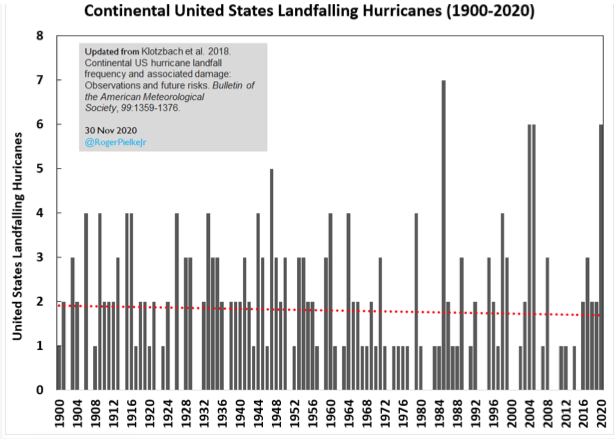 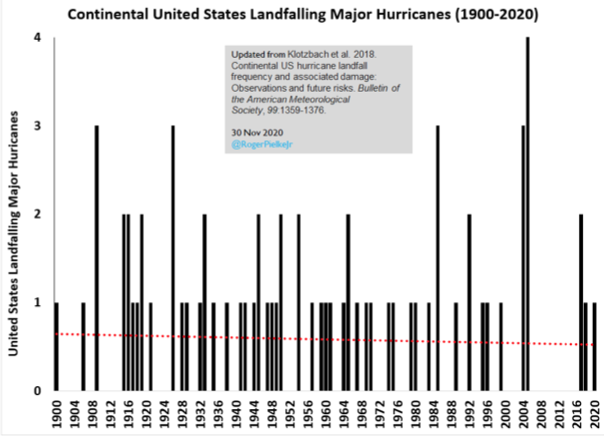 The backlog of forest restoration projects suggests that there are issues on public lands that really need to be addressed, but that is not an argument for creating a vast new federal bureaucracy with as many as 1.5 million government employees. Public projects, such as roads, ports, schools, sewers, and dikes, are usually built by private companies, not by a new Civilian Construction Corps.

But what about the congressional Democrat's other justification: The supposed COVID-19 pandemic unemployment crisis? 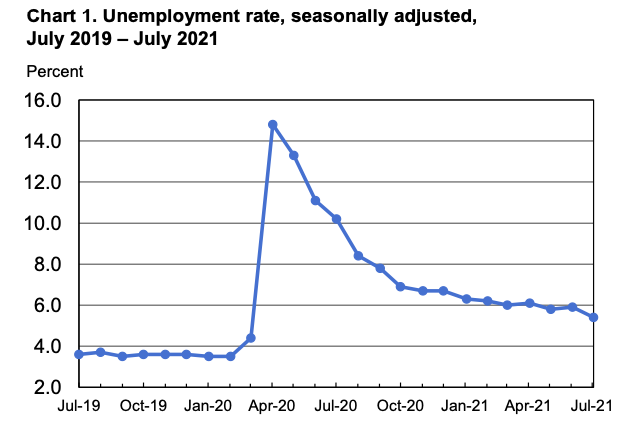 The Bureau of Labor Statistics just reported that the unemployment rate has fallen from its early pandemic peak of around 15 percent to 5.4 percent in July. Employment is still down by 5.7 million jobs—or 3.7 percent from its pre-pandemic level in February 2020. However, the Department of Labor reported earlier this week that for the first time ever U.S. employers posted a record 10.1 million job openings in June. Filling all of those jobs would boost overall employment well past its pre-pandemic high.

The problem of man-made climate change does need to be addressed, but the creation of a jobs-killing CCC is not a useful way to do that.

Iran's Hijab Protests Are Part of a Long, Slow Revolution