With help wanted and now hiring signs affixed to restaurants seemingly nationwide, small and large businesses alike scrambling to hire, and strong economic signals arriving on consumer confidence and retail sales, expectations for April employment growth revolved around 1 million potential new hires. Those expectations were crushed when the Bureau of Labor Statistics reported just 266,000 jobs created, not even a kissing cousin of 1 million.

Reactions to the weak numbers were most pronounced from Biden administration officials, who, like Adam Smith's "man of systems," see the economy as a chessboard where benevolent leaders move pieces only to learn that "every single piece has a principle of motion of its own, altogether different from that which the legislature might [choose] to impress upon it." Those who think stimulus and regulations reliably generate prosperity best be forewarned. Sometimes we expect 1 million and get 266,000 instead.

The shortfall puts stimulus back in the spotlight. Why didn't the crucial January stimulus work as promised? Should we open the purse wider? What about President Joe Biden's newly unveiled American Jobs Plan, American Families Plan, and the seemingly all-encompassing infrastructure plan? Should we believe they'll work?

Biden, a gifted politician who knows how to make lemonade when handed a lemon, only pushed harder: "Some critics said we didn't need the American Rescue Plan, that this economy would just heal itself. Today's report just underscores, in my view, how vital the actions we are taking are. Our efforts are starting to work, but the climb is steep, and we have a long way to go."

For now, the administration keeps hold of the chessmen.

It should be pointed out that the creation of 266,000 new jobs is not actually that bad. The report provides evidence of a command economy transitioning back to a more market-driven one that is scrambling for footing. The monthly average gain for new jobs over the last seven months, including April, is 355,000, with March's 770,000 the largest. There have not been a million jobs added since August.

With some states relaxing restrictions on gatherings and others still tightening, auto companies shutting down due to unpredictable chip shortages, and even cat food in short supply due to pandemic surges in pet ownership, a COVID-19 command economy that lacks enough market-determined price signals to guide it was always going to be difficult to predict.

While there is little chance the economy will be allowed to completely self-heal, it's trying. Think about the government-shuttered sectors now beginning to reopen. Employment in the hard-hit leisure and hospitality sector saw a 330,000-job increase. With restaurants and bars opening for in-place service, fewer meal delivery people are needed. Employment in couriers and messengers fell by 77,000. And with permanent hires rising, not as many temps were needed. The number employed in that category fell by 111,000, and at 296,000 is lower than in February 2020.

Where we are on the path to pre-pandemic prosperity relates directly to the workforce. As shown in the below chart built using Federal Reserve data, April's count of 161 million workers puts us short by more than 3 million. The workforce is expanding, but with a way to go. 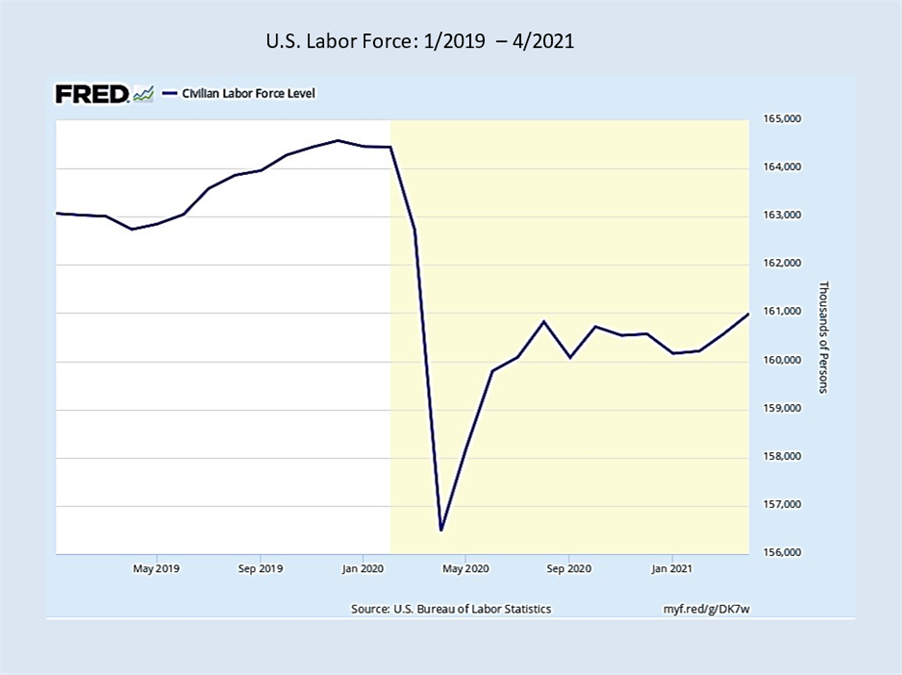 With regulatory switches turning off and on, May's employment number may pop through the roof, but we are still left with a serious question: Are people incentivized to work? Even though Secretary of Labor Marty Walsh argues that the federal unemployment supplement does not contribute to a lower willingness to reenter the workforce, there is abounding anecdotal evidence that the $300 a week addition to state unemployment pay dampens worker enthusiasm.

Folks in the real world, like my restaurateur neighbors, offer a common concern: Business is now booming, but their former employees are not interested in returning. The situation is so prevalent nationwide that an April National Federation of Independent Business report indicated that 44 percent of their business-owning members have job openings that cannot be filled—22 percentage points higher than the 48-year average.

When state and federal unemployment benefits are combined, furloughed workers across the states, on average, can earn $15 per hour in unemployment compensation until September without lifting a finger. Indeed, one of my close relatives was furloughed in 2020 and began getting $840 a week in compensation—more than she'd ever earned in her young work life. She was not all that excited when her shop reopened.

As much as unemployment compensation can explain a slowly recovering workforce, there is far more to the incentive issue. Let's return to past-and-future stimulus payments in whatever form. Now revisit the chart and think about the 3 million people no longer in the workforce. Why exactly should we be surprised? If federal programs provide the means to earn a living—or perhaps in some cases to lay aside savings or provide support to loved ones or charity—substituting leisure time for work makes perfect sense.

It's possible to make too much of one jobs report, but April's unexpected weakness provides an opportunity to reconsider the frantic federal efforts to cushion the shock that has hit us, and see if some aspects of the government intervention are working against a return to higher employment and earned income.

Given all of this, the American economy is performing rather well. Yes, $4 trillion in stimulus matters. And yes, more spending, often in the name of creating jobs, will add employment to directly targeted industries and communities. But while one government foot is on the gas, the other is hitting the brakes. Like it or not, we will one day have to pay off the loans that are funding our temporary prosperity. Doing so will require acknowledging that there is still no such thing as unearned prosperity.