Reason is supported by:
Cliff Roth

If a picture is worth a thousand words, how many detailed economic warnings does it equal? Or maybe there's just one word that matters, and that word is "unsustainable," which is how the Congressional Budget Office (CBO) has long described the federal government's spending habits. Through years of failing to draw the attention of presidents and lawmakers with its publications, the CBO has now clearly illustrated the looming fiscal catastrophe with pretty pictures that even elected officials poised to double down on their extended spending spree might understand. 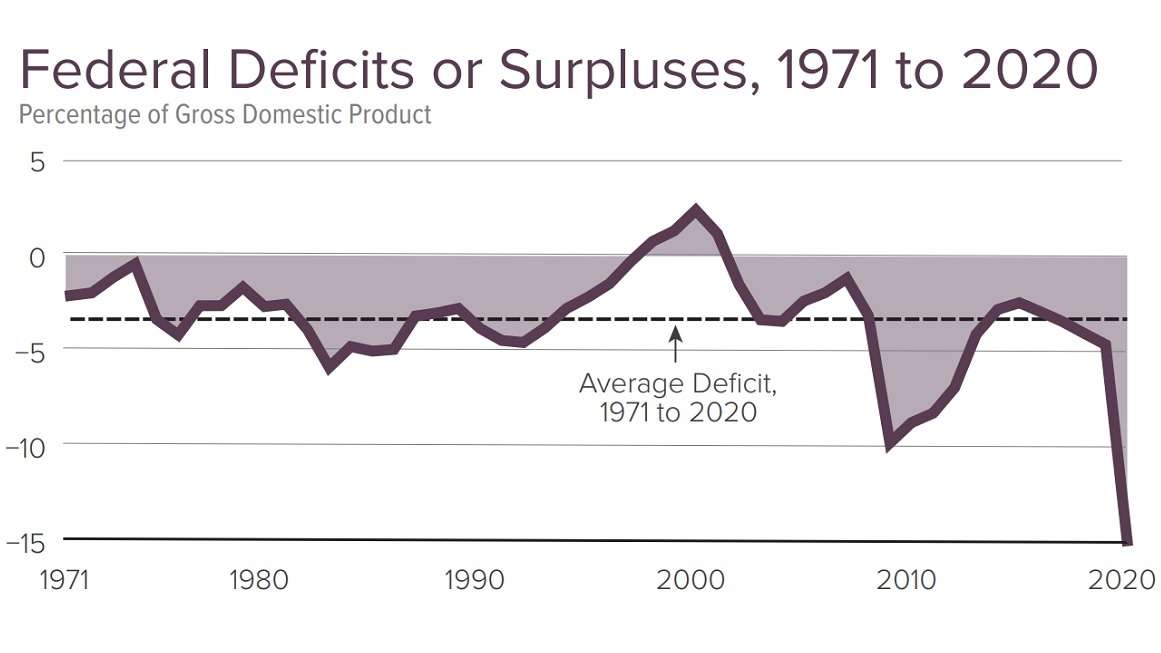 Daringly venturing to further test the comprehension of denizens of the Capitol and the White House, another pair of charts points out that $3.4 trillion in revenues represents 16.3 percent of GDP, while $6.6 trillion in outlays is 31.2 percent of GDP. What was spent by the federal government, in other words, adds up to almost a third of the entire economy and almost double what was collected in taxes.

But 2020 was a very special year, just as elected officials themselves often seem quite special. Perhaps the demands of the year justified a deviation from a tradition of fiscal restraint? Well, not so much, more illustrations attest. As one graph points out, the federal government has consistently spent more than it takes in for at least 50 years, with the exception of a brief period ending in 2001. "To fund government spending in years of deficits, the Treasury borrows from individuals, businesses, the Federal Reserve, and other Countries," the infographic helpfully notes. The result has been a growing accumulation of debt until it equals the size of the entire United States economy.

Spending more than you make, year after year, and running up debt would seem to be … unsustainable. And that, of course, is just how the CBO describes such spending habits. 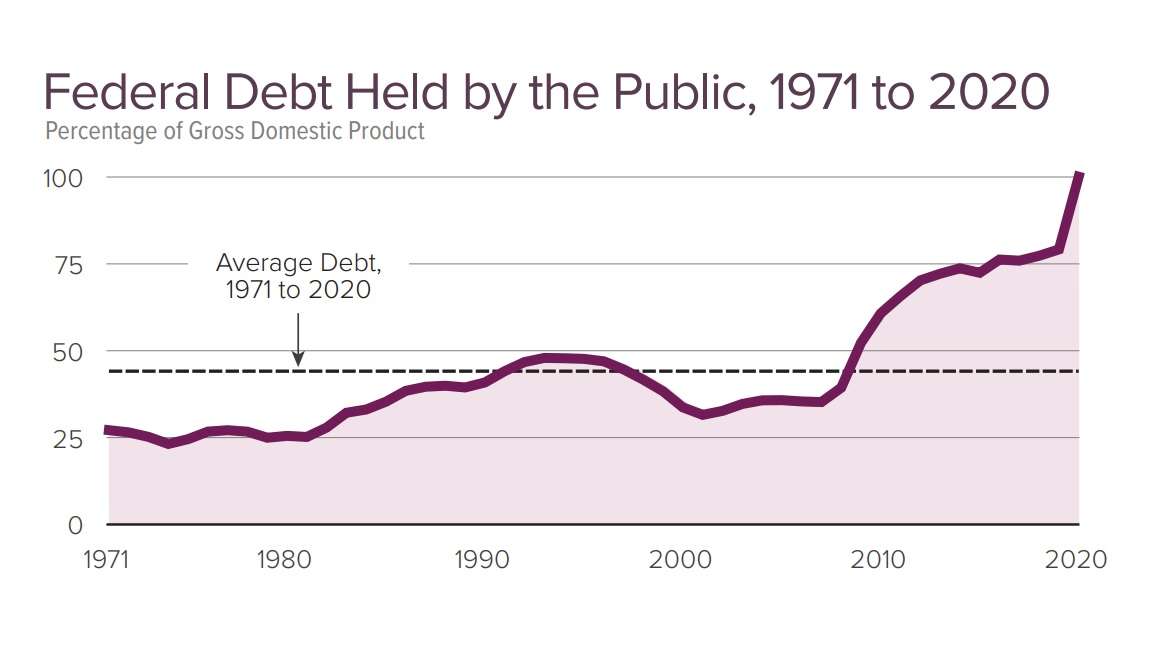 "[F]inancing a large and permanent increase in government spending through perpetual borrowing without any corresponding adjustment in spending or revenues at some point in the future is unsustainable," CBO warned in March in response to ongoing moves to expand the size of government.

"[O]ver the long term, changes in fiscal policy must be made to address the budget situation, because our debt is growing on an unsustainable path," CBO Director Phillip L. Swagel told the House Budget Committee in January 2020, before "emergency" pandemic spending.

"Debt is on an unsustainable course in CBO's projections," then-CBO Director Keith Hall advised a gathering of business economists in February 2019. "To put it on a sustainable one, lawmakers will have to make significant changes to tax and spending policies—making revenues larger than they would be under current law, making spending for large benefit programs smaller than it would be under current law, or adopting some combination of those approaches."

"[E]ven with federal spending for all programs other than Social Security and the major health care programs on track to reach its smallest share of GDP since at least 1940, federal debt remains on an unsustainable path," then-CBO Director Doug Elmendorf cautioned a macroeconomic policy conference in 2014.

But the federal government hasn't deviated from its spending habits through all of these years, holding to an unsustainable path of spending far outstripping revenues. So, what are the likely consequences?

"A large and continuously growing federal debt would increase the chance of a fiscal crisis in the United States," Hall told the Senate Budget Committee in 2017.

"If federal debt as a percentage of GDP continued to rise at the pace that CBO projects it would under current law, the economy would be affected in two significant ways," the CBO noted in January 2020, before the massive expenditures of the past year. "That growing debt would dampen economic output over time" and "Rising interest costs associated with that debt would increase interest payments to foreign debt holders and thus reduce the income of U.S. households by increasing amounts."

That is, running up debt acts as a dead weight on the economy, becoming ever-more expensive to sustain while making people poorer. But not all approaches to balancing expenditures and revenues are created equal: raising taxes to the sky-high level required to pay for politicians' increasingly grandiose spending schemes would have nasty consequences, too. That's because siphoning money from Americans' pockets to pay for elected officials' pipe dreams would leave people with less to save, spend, invest, and use to build prosperity.

"The general finding is that increasing taxes leads to lower GDP and personal consumption," the Congressional Budget Office warned in March of the consequences of higher taxes to finance increased government expenditures. "After 10 years, the level of GDP by 2030 is between 3 percent and 10 percent lower than it would be without the increase in expenditures and revenues."

There really are limits to how much governments can spend without inflicting pain on the people suffering under their mismanagement. Not that the people elected to Congress and the White House have shown any signs of comprehension or concern.

Given that these are people capable of running for public office without feeling any apparent sense of shame, is it possible that they're just too stupid to understand our reports? you can imagine CBO economists asking one another as they tossed around the idea for the recent infographic. Does anybody have any crayons?

And so we end up with pretty pictures illustrating a very unattractive fiscal situation. Maybe drawings can finally deter elected officials from their outrageous spending habits where detailed reports have failed to attract their attention.

What Was Your Favorite Reason Video of 2022? And How Can You Get More of Them?