After a strong start, the American rate of vaccinating against COVID-19 has been stalling. Some are blaming the U.S. Food and Drug Administration's (FDA) decision to halt the use of Johnson & Johnson's vaccine after six recipients developed blood clots.

The number of Americans who received their first dose of a COVID-19 vaccine rose greatly from late December 2020 through around the middle of April 2021. But since then, the numbers have been dropping sharply.

"The vaccine program is in free fall—1st doses are down over 40% and falling," notes Daniel Bier of Freethink, pointing to data from the Centers for Disease Control and Prevention (CDC).

What explains the drop? Some of it could just be that we've reached a tipping point. The vaccine's availability lagged behind the market of people who wanted it, but that market was always limited and now we're catching up.

But the FDA's "pause" of the Johnson & Johnson vaccine also seems to have played a role. For one thing, there were suddenly fewer vaccine doses available to distribute. More worryingly, the pause may have helped contribute to vaccine hesitancy.

Bier thinks "the decision to yank J&J's vaccine was the trigger. Daily vaccinations were rapidly growing for every demographic under 50, and stable for 50-64, until the FDA's 'pause,'" he tweeted, along with the following chart: 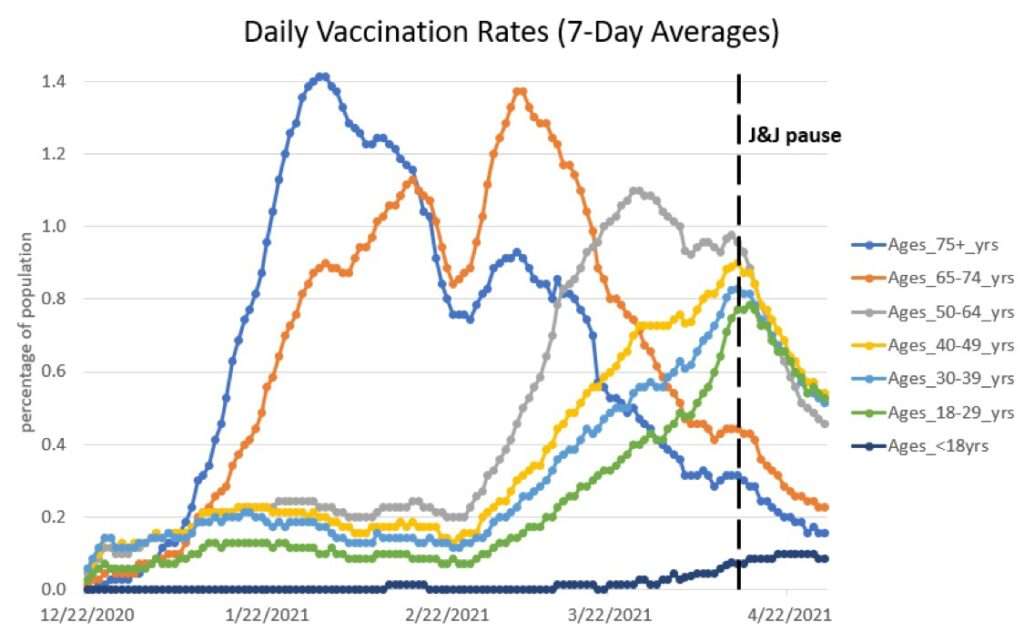 "What this shows is that people ages 18-49, who were rapidly increasing their vaccination rate, took a sudden lurch downward right at the time the J&J pause was announced," points out Kevin Drum, a political blogger. "Those from 50-64, who were holding steady, also took a big downward dip."

"The similar timing across age groups is easy to explain if it was the J&J pause (everyone saw the pause at the same time) but it requires multiple coincidences to explain why every age group would reach their hesitancy point at different levels of vaccination but at the same time," writes Alex Tabarrok, professor of economics at George Mason University.

Again, some of this represents a drop in vaccine supply once Johnson & Johnson doses were paused. But data also show that it isn't just Johnson & Johnson vaccine rates that are falling; Pfizer and Moderna rates have been declining, too. And rates have continued to fall after the FDA lifted the J&J pause on April 23.

Regardless, there's no doubt that "the vaccination program was mortally wounded on April 13," Bier notes. 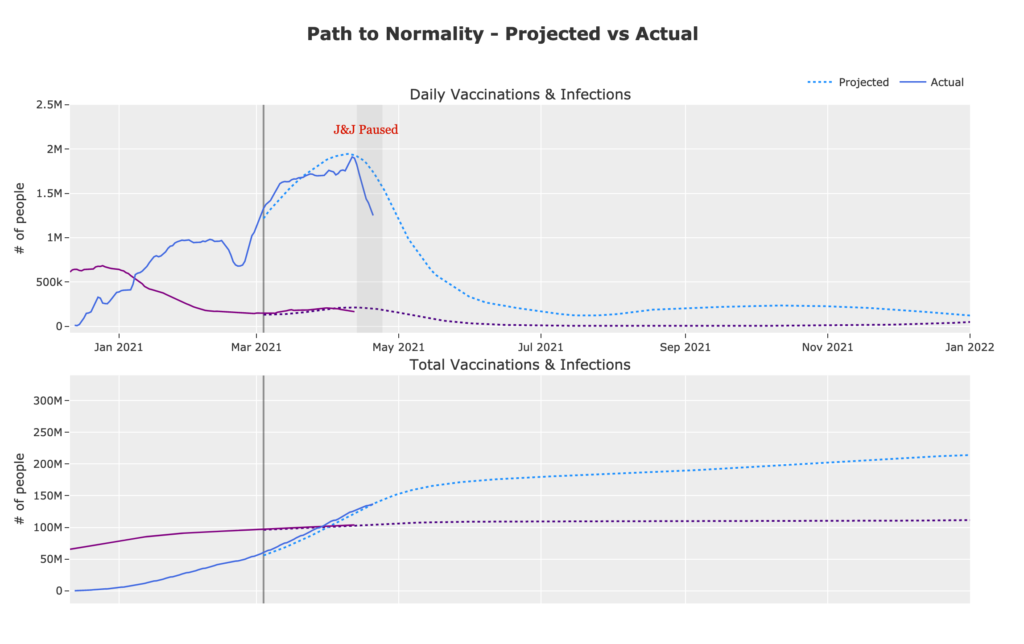 The good news is that "more than half of adults in the United States have received at least one Covid-19 vaccine dose and the country has surpassed 200 million administered doses," as The New York Times notes.

But areas across the country have been seeing sharp drops in vaccination numbers recently.

"Everyone over age 16 can now get a free COVID-19 vaccine, but Oklahoma is reporting a sharp drop in the number of shots being administered," local station KTEN reported a week ago.

"Appointments for the first dose of the COVID-19 vaccine have decreased by about 50% in Los Angeles County," the Los Angeles Times reports today.

In New Middletown, Ohio, "pharmacist Mark Johnson had 10 doses of the Johnson & Johnson (J&J) shot left over at Village Pharmacy…before the vaccine was paused on April 13. But since reauthorization of the single-dose shot last week, the independent pharmacy has only been able to find three takers," notes Spectrum News 1.

"Louisiana has stopped asking the federal government for its full allotment of COVID-19 vaccine. About three-quarters of Kansas counties have turned down new shipments of the vaccine at least once over the past month. And in Mississippi, officials asked the federal government to ship vials in smaller packages so they don't go to waste," according to the Associated Press.

"Thousands of vaccine doses at Pennsylvania Convention Center set to expire amid drop in demand," reports ABC News. "Demand is down for COVID-19 vaccine in Indiana," says WNDU South Bend. "Idaho officials worry COVID vaccine hesitancy is rising," notes the Idaho State Journal, as ABC 7 warns that "Missouri vaccination numbers continue to drop with most of the population still unvaccinated." And headlines like these go on and on…

This will not end well:

A coalition of groups is calling on President Biden to create a task force that can explore ways to crack down on deliberate disinformation campaigns in ways that don't unduly limit free expression. https://t.co/Pjt7NzCA4K

His promise was not a clear decree: The mayor has little authority to eliminate virus-related restrictions. But the penciled-in goal marks a symbolic shift for a city devastated by the pandemic.

• The FDA is now officially moving to ban menthol cigarettes. (Read Jacob Grier for Reason on why this is a terrible idea.)

Content moderation at scale is a really hard problem pic.twitter.com/hrXQp6xsXz

• "In reviewing dozens of affidavits of searches that were deemed illegal by judges, collected during a five-year period, Spotlight PA last year found Pennsylvania State Police often used a wide range of what is known as pretextual stops — pulling people over for driving in the center or right lanes for too long, or having an unlit license plate — to stop drivers and then question them," PennLive.com reports.