Reason is supported by:
Max Pinigin

An international team of researchers led by the Salk Institute biologist Juan Carlos Izpisúa Belmonte report in Cell that they have created the world's first human-monkey embryos. Their goal is not to generate half-monkey, half-human servants; it is to figure out how human and animals cells interact, with the goal of eventually growing human transplant organs in animals like pigs and sheep.

The researchers injected human pluripotent stem cells into already growing monkey embryos and then traced how human cells developed and migrated as the chimeric embryos grew for 20 days in Petri dishes. In the mixed embryos, 3 to 7 percent of the cells were human. 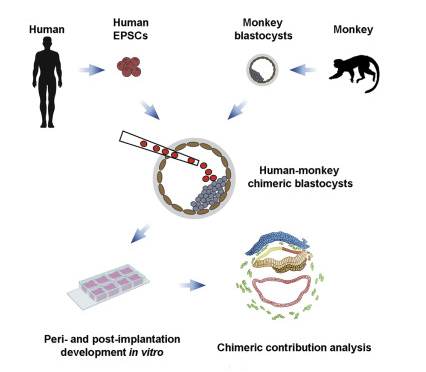 The National Institutes of Health human stem research guidelines currently prohibit research in which human pluripotent stem cells are introduced into non-human primate blastocysts. Over the years, a number of state and federal bills have been introduced to ban this type of research. That is among other reasons why the laboratory work for this research was conducted in China.

Some bioethicists have expressed concerns about the research.

"My first question is: Why?" asked Kirstin Matthews, a fellow for science and technology at Rice University's Baker Institute, when interviewed by NPR. "I think the public is going to be concerned, and I am as well, that we're just kind of pushing forward with science without having a proper conversation about what we should or should not do."

One often-mentioned worry is that human neurons could possibly get installed into an animal's brain and somehow make its consciousness more humanlike. Another fear is that human cells that produce sperm and eggs could migrate into the testes and ovaries of monkeys, who might then mate and create a human fetus. Surely such possibilities require further ethical reflection, but the mixed cells in these experiments got nowhere near such possibilities.

As the researchers conclude, "this line of fundamental research will help improve human chimerism in species more evolutionarily distant that for various reasons, including social, economic, and ethical, might be more appropriate for regenerative medicine translational therapies." Translation: This research aims to help scientists figure out how to grow fully human organs in other animals, such as pigs and sheep, that are not as evolutionarily close to us as monkeys. Given the ongoing and persistent transplant organ shortage, let's hope this work succeeds.

A Lame-Duck Congress Should Reject the Extended Child Tax Credit