"Out and into the world" was the Spectator's headline on June 23, 2016, the day of the Brexit referendum. The cover showed Britain as a bright butterfly emerging from a small European Union-branded box. 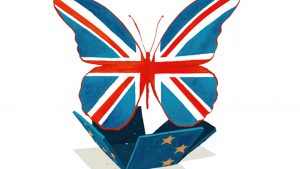 I mention that headline for two reasons. First because, if I were an American, I might easily have formed the impression that Brexit was the U.K.'s version of Trumpism—nostalgic, nativist, and protectionist. This view, propagated by both supporters and opponents of Trump, finds almost hysterical expression in the pages of The New York Times, which runs regular features about what a racist hellhole Britain has become.

In fact, every libertarian I know (with one eccentric exception) voted Leave. We clocked the E.U. a long time ago for what it was: a dirigiste, corporatist, authoritarian racket. A

condition of Britain joining was that we had to abandon free trade with more distant countries—notably those in the Commonwealth, such as Canada and Jamaica, which had previously enjoyed largely unrestricted access to our markets. During the 1970s, we were obliged to apply the Common External Tariff in phases and, with it, the various non-tariff barriers designed to prop up politically connected Continental industries.

A consequence of leaving is that we can now trade freely with every continent—including, naturally, Europe. This brings me to the second reason for recalling the butterfly: Britain has, as I write, signed a staggering 63 new trade deals, including one with the European Union.

This was not in the Remainer script. Campaigners who wanted to remain in the E.U. believed Britain outside of it was supposed to be feebler and more introverted. Conservative Prime Minister Boris Johnson, then mayor of London, spent the referendum campaign talking about a high-seas, buccaneering Britain, but the other side, convinced that the only possible reason to vote Leave was hostility to immigration, never heard him.

Boris meant what he said. Last year, at the maritime museum in Greenwich, he made the most free market speech that I have heard from a mainstream politician. Brexit, as he saw it, was a chance for the country that gave the world Adam Smith and David Ricardo to recover its global vocation: "Humanity needs some government somewhere that is willing at least to make the case powerfully for freedom of exchange, some country ready to take off its Clark Kent spectacles and leap into the phone booth and emerge with its cloak flowing as the supercharged champion of the right of the populations of the earth to buy and sell freely."

Four weeks after that speech, the world locked down in response to the coronavirus. Bizarrely enough, the terrors predicted by Remainers thus came to pass, albeit not for the reason they expected. Britain did indeed suffer a recession, rising unemployment, and closed borders.

Although the lockdowns asphyxiated economic activity and caused global trade volumes to plummet, there is every reason to be optimistic about Brexit. The deal that Britain has secured with the E.U. gives it what it wanted all along—and what Remainers always said was impossible—namely free trade without political union. Rather than accepting E.U. rules in exchange for preferential access, as former Conservative Prime Minister Theresa May wanted, Johnson insisted on full regulatory autonomy. This means that some service industries will face new barriers when selling into the E.U., but their eyes are already turning to more distant horizons. In any case, free traders understand that barriers always do the most harm to the country (or customs union) that imposes them. There is something mercantilist, almost pre-modern, about the E.U.'s decision to view opening its markets as a favor to selected allies rather than as a growth strategy.

Some of Britain's other 62 trade deals temporarily confirm existing arrangements, with a promise to be more comprehensive when time allows. Others, such as that with Japan, go further than the E.U. did. A few, notably Australia and New Zealand, are new, in the sense that Brussels has no deals with those countries.

Britain is also applying to join the Pacific trade bloc, the CPTPP—something the U.S. might want to reconsider. True, the U.K. is not a Pacific country (other than in the technical sense of owning Pitcairn) but we have exceptionally close ties with a number of existing members, including Australia, Singapore, and Canada. At the same time, the U.K. is negotiating with India, South America's Mercosur trade bloc, and the Gulf monarchies.

Britain's most important talks, though, are with the U.S., our chief trading partner and biggest investor. A North Atlantic trade deal would have happened decades ago had it not been for the E.U.'s protectionism, especially in agriculture.

Voters are rarely enthusiastic for free trade, especially at a time like this, when their psychology have been impacted by the epidemic, making them warier and more inward-looking. But, for years to come, economic recovery is going to be the supreme policy goal. An ambitious U.S.-U.K. trade deal is the most obvious lever to pull.

Georgetown Should Not Fire Ilya Shapiro for a Bad Tweet

Are Oregonians Ready To Pump Their Own Gas?

Will 2022 Be the Year of the School Board Recall?