It was the day before New Year's Eve and the outdoor Union Square Greenmarket, despite temperatures in the low 30s, was busy with shoppers buying Hudson Valley apples and Vermont maple syrup and pretzels from Pennsylvania Dutch country, the last of which sat on a table below a pretzel flag snapping in the wind.

I'd first tried Martin's Handmade Pretzels two weeks earlier. As a pretzel fanatic, I knew a good one by sight, and the deep brown palm-sized twist turned out to be just right: the perfect dryness, the proper saltedness, super crunchy without being so hard it made your jaw hurt to chew it. Later that day, I posted an Instagram video about how amazing the pretzels were, maybe the best I'd ever had, to which someone replied, "One of their bakeries burned down last week."

This was the same week I'd been covering the continuing ruination of the food and beverage industry in New York City, knocked out due to people's fears of catching COVID-19, certainly, but absolutely gutted by an escalating series of city and state regulations. Every day, there were new stories about places that would never reopen; of innovations that stood no chance against bad weather, or against politicians treating the restaurant industry as both a trial balloon and a punching bag. Restaurants and bars in New York City, since the start of the pandemic, had been shut, partially reopened, allowed to have outdoor dining, and had that taken away. This was already having a massive impact as of last August, when The New York Times reported that one-third of New York's small businesses might never reopen. More recently, Eater NYC reported that more than 1,000 restaurants have closed permanently since March 2020.

For a food purveyor to have a fire on top of that? In the weeks leading up to Christmas? I asked Ethan Gallagher, co-owner of Martin's who, when I got to the Greenmarket, was on the phone with a family member dealing with a health issue, if it felt like the trials of Job.

"One more thing," he said, as the former-employee-turned-volunteer beside him handed out eight-ounce and one-pound bags of pretzels. 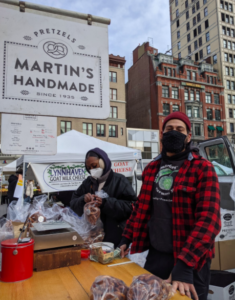 "Everybody got laid off during COVID, so now it's just Dondrea helping and standing outside in the cold," Gallagher said, and also, that the only reason they had any pretzels to sell was because Martin's has a second bakery. Based on the customers queuing up two- and three-deep, it would not be able to meet demand.cov

"We're one of four families left in the country that still do this all by hand," he said. "People know of us because we've been around for so long. We've been at Greenmarket since 1982, when the former owner, Alfred Milanese, who I worked for for seven years before buying the business off him, started selling here."

Milanese, a writer who'd been living part time in Lancaster County, Pennsylvania, tasted the pretzels made by a Mennonite baker and brought them to New York City. His first customer was Giorgio DeLuca, founder of the gourmet store Dean & DeLuca. The pretzels would wind up being sold at 55 greenmarkets across the city and at countless wholesale locations. French Chef Jean-Georges Vongerichten grabs pretzels at the Union Square Greenmarket "on the regular," says Gallagher; Sarah Jessica Parker nibbled a Martin's Homemade on an episode of Sex and the City; and Businessweek once wrote, "Those who snack in times of stress will find no finer hard pretzels than the hand-twisted beauties from Martin's."

Gallagher himself probably could have gnawed a few the morning of Saturday, December 12 when, while setting up at the Greenmarket, he got a call from his business partner.

"He said, 'The bakery is currently in flames,'" Gallagher recalled, and that he knew, instantly, that any earnings they'd managed to eke out in 2020 were now literally up in smoke.

"On Friday before the bakery burned, we ran a sale of flavored pretzels and sold $13,000 worth," he said. "Half of those orders were fulfilled, but they weren't picked up by UPS on Friday night. On Monday morning, I refunded $14,000 worth of orders."

It's not as though Gallagher had not been suffering all year, with the loss of nearly all his wholesale accounts due to mandatory restaurant and bar closures.

"The tricky thing about this world is that a big part of my business was wholesale," Gallagher said. "That was gone right away when COVID hit."

He listed some of the places that can no longer take orders. "ABC Kitchen, City Market, 232 Bleecker, The Untitled at the Whitney; immediately gone. To say nothing of people like Santos. He was a forager for ABC Kitchen who would come [to the market] every week, I've known him my entire New York experience, he was two years younger than me; died from COVID," said Gallagher, who is 43. "It's so impactful and there's no way to not empathize with that. I try to keep everything perspective and know that if not for what [the Greenmarket] is, which is an outdoor grocery store essentially, we would have been shut down, too. It's the only reason that I still have a job, have this business; without it we would have folded completely. There's no way we would have survived."

Did Martin's customers know about the fire?

"I put up a little sign, and Greenmarket put out a really great post," he said. "I actually held it together really well for the first week, and then that following Saturday when I was here, we have longtime customers whose kids have teethed on these, who teethed on them when they were kids, so it's such a history here and customers opened up to me in the most beautiful ways. I can't even talk about it; it was pretty overwhelming."

Overwhelming, too—or perhaps infuriating is a better word—to know that there was no relief coming from the offices that had forbidden food operations to operate. What did they expect people to do? How, with no revenue, does any business survive? As one restaurant owner recently told me, had officials told him, out of an abundance of caution, to close for a few months and paid for him to be closed, he would have had no problem with it. Instead, people have been left in the figurative and literal cold, to work things out for themselves.

Which is where Gallagher was as he worked that first shift after the fire.

"What was going through my mind that Saturday morning was, how do I pivot from this?" he said. "One of the plans I'd had approved for the new year was to bring a soft pretzel to the market. People ask all the time [because] there's no really great soft pretzel gig in town."

As a kid growing up in New York City, grabbing a hot soft pretzel from a street vendor, before my dad took me to a Knicks game, say, was a total religion. I told Gallagher I still buy them but now they're gummy or barely warm or oversalted, and always the size of a dinner plate. You eat basically a third and throw the rest in the trash or onto the subway tracks for the rats. They're always terrible.

"They're always terrible," he said.

And yet I keep getting them, hoping this street staple has been reclaimed, to have something good about New York be good again. If Gallagher can sell a great soft hot pretzel at the Greenmarket…

He will crush it, and speaking of crushing, how about the customer trying to shove the sack of pretzels he just bought into a too-small cloth sack? How many pretzels did he have there?

"Eight pounds," said the customer. Then, to Gallagher, "I heard you burned down."

Gallagher listened as the customer explained he usually bought online but they were sold out so he made a trip to the market today. "They're very good, they're very crunchy, just delicious," he said, and then apologized for having to run.

"I'm going to Mass," he said, and took off with his sack of pretzels.

I told Gallagher I was going to buy some, too; that we had them earlier in the week with margaritas and they were delicious.

"They go very well with everything," he said, nodding at the winemaker at the stall next door, who nodded back. "In simpler times, we would drink wine together and eat pretzels."

May we have simpler times again.