I was walking down Greenwich Avenue in New York City's West Village last week when I saw something poignant: dining tables at the curb, set with white linen and electric candles. It was only 5:30 p.m. but already dark, which might have added to the romance, and I guess it did, if you don't mind eating outside when it's 35 degrees out. 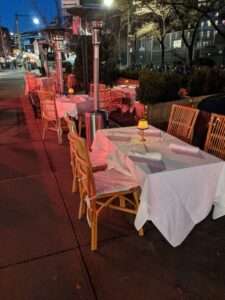 The restaurant was one of nine open along a two-block stretch of Greenwich between Sixth and Seventh Avenues, each trying to navigate Gov. Andrew Cuomo's edict, set in September, requiring New York City restaurants to operate at only 25 percent indoor capacity. Last week he took it even further: As of December 14 and until further notice, there will be no indoor dining permitted whatsoever. His reasoning? With COVID-19 hospitalization rates rising, any potential source of transmission must be eliminated.

This would appear not to be very educated guesswork. The latest transmission data show that 74 percent of new COVID-19 cases come from private in-home gatherings, and only 1.3 percent from bars and restaurants. Seeing as they cannot (yet) prevent individuals from being inside their own homes, officials instead press on with a series of decisions that have battered the restaurant industry since March, when eateries were first ordered to close. At that time, establishments got creative: They pivoted to takeout, they sold cocktails on the street, anything to keep some money coming in until they could reopen. Such tactics were not enough. As reported by Eater NYC, more than 1,000 restaurants permanently closed between March and November.

Restaurateurs' main gambit, however, has been to erect curbside dining structures. While a source of irritation for anyone looking for a parking spot, they've been a welcome sign of normalcy in a not-normal time. They also make the streets look festive, especially at night, all lit up and ready for patrons. And yet, when I started my walk down Greenwich, every table at every restaurant was empty. 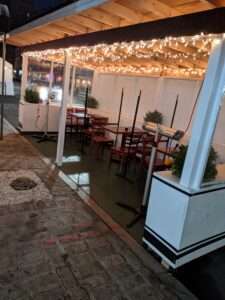 "This has been the biggest challenge that we've ever had, I think," said Rick Salas, manager at Elephant & Castle, which installed curbside dining a few months ago. "We do have heaters out there but of course, when it gets really cold, I don't know how effective it's going to be. I mean, it's amazing that there are brave souls that don't mind the weather."

A mainstay on the New York dining scene––he worked at Keens Steakhouse in midtown Manhattan before coming to Elephant & Castle 28 years ago––Salas showed admirable forbearance at the city's restaurants being used as a test balloon, if not a punching bag.

"I can understand that this has been a stressful situation, for every agency in the city," he said. "I know that they're lacking in not enough people, so we're trying to be as understanding as possible. It's difficult. We're basically staying open to keep ourselves out there and making money, obviously, and keep as many people employed as possible."

New York state does not appear to share these concerns, instead instituting new requirements that would seem to have little to do with preventing the spread of COVID-19. In July, for instance, state officials required bars to start serving food. This seems both arbitrary and cruel, to require businesses barely hanging on to invest in cooking equipment and learn how to use it. Last month came the order that any "roadside seating" must be tricked out by December 15 with "sandbags, reflector tape, snow sticks, and plastic barriers," which the city would provide free of charge. Thoughtful, except one restaurateur friend last week spent half of Wednesday and Thursday waiting at city dispersal sites, only to have them run out each time. Finally, on Friday, he trucked out to Staten Island to get the sandbags, the same day he was ordered to shutter his Manhattan restaurant to indoor dining. How did he feel about this?

"Cuomo is an asshole," he texted. "Maybe evil is a better word."

It is hard to understand Cuomo's logic when the closures apply only to New York City and not other areas in the state, where transmission levels are most recently and for the most part higher. He's previously stated the reasoning has to do with population; that "There is a density level in NYC that is destructive," a charge his critics might level at him.

There has been and will continue to be the ingenuity that comes with needing to survive. For instance, the oyster bar down the street from me recently transformed itself into a wine and provisions shop. Handy if you want to pick up a bottle of red or some fancy salt, but no way for the owner to meet the bottom line.

What does Cuomo expect people to do? Cocoon themselves and emerge resplendent once there's a vaccine and/or the commands from Albany stop? While some restaurants do plan to go into hibernation mode, the majority will not be able to survive without income; what industry could? Yes, COVID-19 is legitimately scary. Also scary: eradicating that which allows an ecosystem to function. Imagine a city as a board game of interlocking pieces. Take away the schools, the gyms, the bars, the restaurants. Cut back on services like the subway, which New York's Metropolitan Transportation Authority says might need to slow by 40 percent. How long before New York City no longer fits together? And what develops in the chasms?

Sitting in front of the bistro, Dov says he "doesn't mind the cold." Plus, as a customer of ten years, he feels some loyalty and wants to do what he can.

"They're closing indoor dining anyway," he says. "I was just talking to the owner. Because there's the hydrant [at the curb], they can't put in the permanent [structures]—which are basically indoor anyway. You have three, almost four walls and a roof, it's hard to make the argument that that's outside. I'm waiting for those to get shut down." 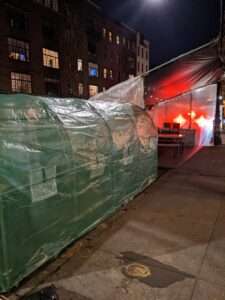 Or fall down. While some of the newly-installed structures along Greenwich appeared solid and commodious, with heaters and even big-screen TVs, others looked like no more than something one might bivouac in. It was heartbreaking to see one small greenhouse-shaped plastic tent, maybe the only edifice the owner could afford, being blown sideways in the icy wind.

"It's been challenging but we are trying to navigate these challenges and come up with ways to beat it," says Adil Fawzi, director of operations at American Bar. "We stay very close to what the customers need. I feel there is more drinking than eating. If someone wants a special drink, we'll try to get it on the menu."

As the sound system played Stevie Nicks' version of "Silent Night," Fawzi enumerated what the restaurant has done to keep the doors open.

"Be very present on social media, on Instagram; that we are here and surviving and we are open. And we took the roadside, obviously," he says. "In the summer it was easy. Easier. All the restaurants, as you see, they try to be creative and build some enclosure that cuts the wind. In the winter obviously, when it starts to get cold, people will be [less inclined] to sit outside; they will not [want] to sit outside but they will have no choice."

Fawzi says the neighborhood has been supportive, locals still coming in to dine—but it hasn't. "Instead of understanding us as a restaurant that is struggling, and not only us but the staff is struggling because we're cutting hours, they call [the authorities]," he says. "And the city has been tough on us, to be honest with you. They won't give us breaks. Every moment of every day I feel like we're on their radar. The radar is the city, and every move you do, they're on you. Which I get. There are guidelines that we follow, obviously. We follow all the guidelines, but sometimes, like the ten o'clock curfew, they won't even give you fifteen minutes to bring the chairs and tables inside. It's just very hard."

An hour into my walk and I saw only four people eating outside, including two young women for whom the new outdoor-only rule will be business as usual.

"We don't sit inside," one told me. "I don't think it's comfortable. I feel like this is safer."

Fair enough. But New York has yet to get really cold, and with the exception of a dusting, there's been no snow. It remains to be seen how alluring the $48 strip steak at Quality Meats will be, and how often, when you're shivering in your winter coat.

One innovation through all this appeared to be the number of food deliveries made on electric bikes, which are now everywhere in the city, including one in front of me on the corner of Greenwich and Sixth. Maybe, I thought, the service was proving to be a win-win-win, a way to move products and keep people employed and get customers that steak at home. I asked the rider, laden with a delivery box, whether he was being kept busy.