Thanks to the COVID-19 pandemic, many Americans found themselves with unexpected amounts of free time this year—and many have turned to entrepreneurship to fill the gap.

According to data from the Census Bureau, the number of new business applications filed in the United States surged during the third quarter of this year to nearly double the quarterly average of the past decade. The Census Bureau's data, which are aggregated from various mandatory filings that businesses must make with the IRS in order to obtain a tax identification number, show that more than 1,500,000 business applications were filed between July and September of this year. It's a dramatic spike in new business applications, which average about 800,000 per quarter and rarely deviate very far in either direction regardless of macroeconomic conditions.

Perhaps even more encouraging is the fact that the number of what the Census Bureau calls "high propensity applications" has shot upward too. Those are businesses that have already surpassed several hurdles in the IRS application process and are deemed to have a "high propensity of turning into businesses with payroll." 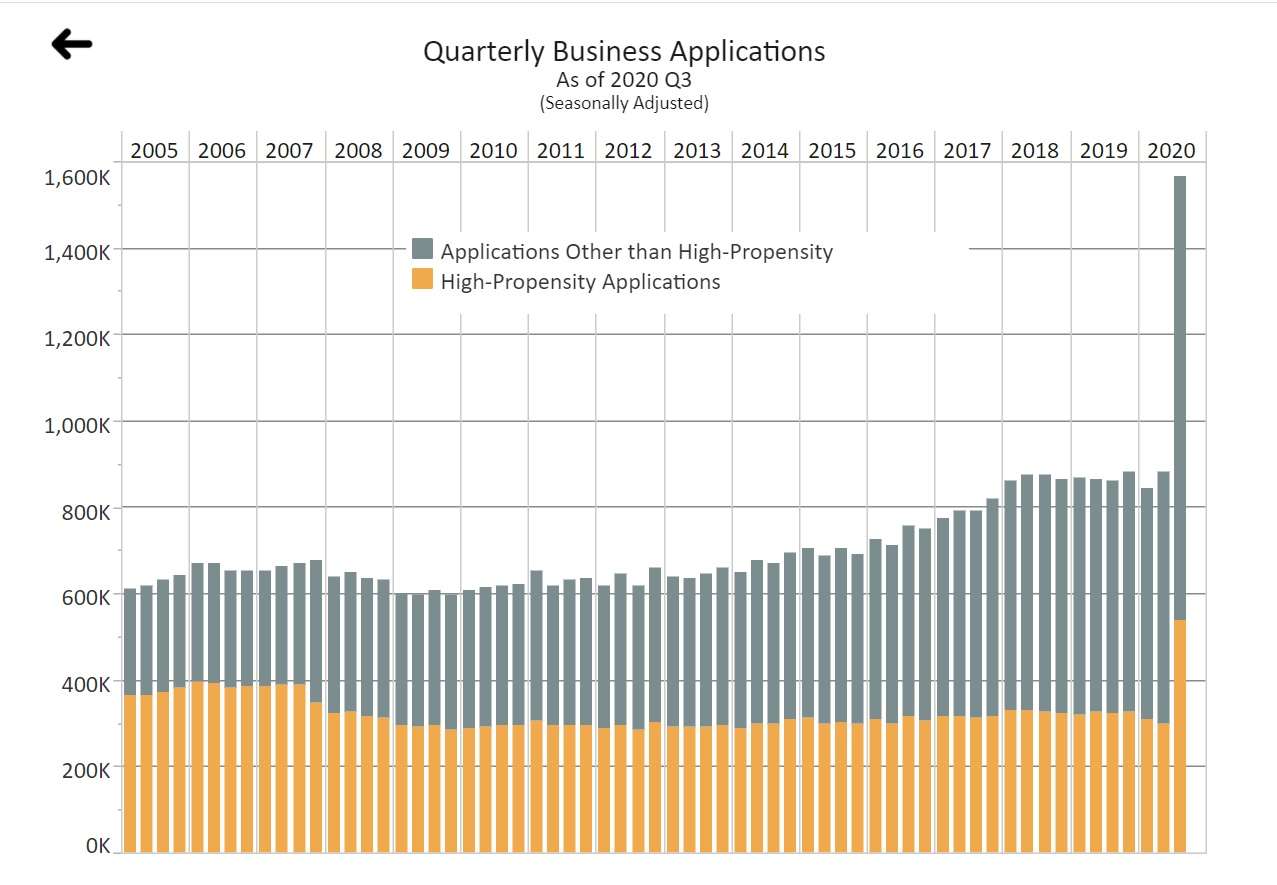 There's more good news: The growth in new business applications isn't concentrated in any particular part of the country. In fact, the Midwest led the way during the third quarter and every single state reported an increase, according to the data.

Like the record-shattering number of unemployment applications documented earlier this year, the Census Bureau's data about business formation provide a useful snapshot of just how completely bonkers 2020 has been. The pandemic has shifted how Americans work, eat, play, and socialize, and it has upended consumers' demand for products. That disruption has created opportunities for new businesses, and entrepreneurial types have responded in droves.

"The talk is that a lot of folks who became unemployed, alright, most regrettably, but they're sticking with it and they're going out and starting new businesses," Larry Kudlow, director of the White House's National Economic Council, said last month. He predicted that the "gales of creative destruction" would blow through the U.S. economy as the recovery kicked in.

Of course, this isn't really "creative destruction" in the way that Joseph Schumpeter originally described it—that is, as the usual churn of the business cycle that sees new ideas and innovations sweep aside older ones as a matter of course. More than 11 million people are out of work right now, and even though that figure has been falling in recent months, it remains more than twice as high as it was in February. The number of businesses to permanently close during the pandemic continues to grow, and those closures could accelerate as a surge in cases prompts new governmental restrictions on economic activity.

But the number of new startups in the pipeline isn't just a silver lining. It's also a way forward.

"There's been this enormous shock to how we interact with each other, and it's a positive sign there are lots of entrepreneurs out there trying to respond to that," John Haltiwanger, an economics professor at the University of Maryland, told Bloomberg. Haltiwanger, a former chief economist at the Census Bureau who helped launch the agency's tracking of business-creation data, says there's a marked contrast between what's happening now and what happened after the previous recession when startups "got clobbered" and were slow to recover.

That's probably due to the nature of the two economic downturns. The Great Recession was the result of a banking collapse and credit crunch that made it more difficult for startups to borrow money. That's not been the case this time around, thankfully, and the recovery should be relatively quick once the acute public health crisis is behind us.

Economic data aside, the number of new businesses might also say something positive about America's resilience in the face of a once-per-century catastrophe. Yes, unemployment, depression, and suicide rates are rising. Still, starting a business is a fundamentally optimistic endeavor—a bet that things will get better and that there is money to be made in doing so—and more Americans than ever before are taking that shot right now.