"Is it a bunch of hooligans or decent people??? So sick of this sh*t I could scream!"

One of my Twitter followers, who is apparently reluctant to tweet profanity, left this comment on a video of marchers I posted Monday night. I understand her frustration. It was the 82nd straight day of protests in Portland. The night before, a driver had been pulled from his truck and attacked by a mob of young people, one of whom was caught on video roundhouse kicking him in the head. The driver, who had done nothing to incite violence despite the crowd randomly shouting that he might have been there to run them down, was hospitalized. (He's since been released.) The assailant was identified but as of this writing had not been arrested. Two nights later, fires would be alight once again, this time in the lobby of a county social services building.

But on Monday, a seemingly fatigued black bloc showed a different face to Portland, further complicating an already frustrating search for good guys and bad guys in the mess.

Meanwhile, the majority of Portlanders go about their lives, participating in none of what is seen on TV, except when it bleeds into their neighborhoods, which it increasingly does. The federal building is no longer under nightly attack and demonstrators—of the kind we do see on TV—are finding other targets, at the moment mostly buildings used by Portland police. The police are now the object of visible and nightly wrath, their stations and union halls trashed, broken into, set on fire. Usually this results in the police facing off with demonstrators, mostly the faction of antifa known as black bloc, who then spill into residential streets. Earlier this month, several dozen ran through a three-block business district, setting fire to newly installed tables and barriers. Their excuse was that the cops chased them away from the nearby police union they were ransacking. OK. But did they have to set the tables on fire?

On Friday, the night marchers were on the move through residential streets, which for the most part are single-family homes, and unlit by streetlamps. It's a surreal scene, hundreds of black-helmeted people funneling on to the narrow streets in the dark. Sometimes residents stand on their porches and watch. One couple and their three young children did so a few nights ago; the father applauded. This, right before the crowd started to chant, "LIAR LIAR GENTIFIER!" and "BLACK PEOPLE USED TO LIVE HERE!" I did not see how the couple, who were white, reacted, but I've spoken to many people who are afraid to appear in any way unsupportive of BLM, despite mission creep so severe that people, including local and state officials, equivocate about the setting on fires and seek near blanket exoneration for people bashing property of all kinds.

The good news is that some of the demonstrators are getting tired and bored. They're almost always young, and if they had school or work or life as they once knew it to go back to, they probably would.

Instead, here they are on a Monday night, gathering in a park in Portland's Kenton neighborhood. The crowd of about 150 is almost entirely made of college-age kids in black militia chic. I am struck by how ungainly most of them look; how the uniform is what bequeaths a sense of stature, of belonging, of power. Individually they are frail, uncoordinated, splay-footed, or fat. They are not an elite fighting force, regardless of how they appear as they move monolithically into the streets.

On the 82nd night of the demonstrations, the chants of "Stay together! Stay tight! We do this every night!" are low-energy. Once the crowd reaches its destination, the Portland Police Association (PPA), a squat building they've previously graffitied and set fire to, it does not seem to know what to do. There is no leader, no agenda. For 30 minutes, people loiter; they drink water; they check Instagram.

"Donut?" asks a young man, offering a boxful from Heavenly Donut across the street.

"A dumpster should appear any minute," says a reporter, in reference to what's become part of the ritual, the setting of dumpsters on fire. The closest dumpster, when I find it, has already been burned. Maybe the young dudes around the corner, the ones scaling the fence to the PPA's parking lot, are looking for something there to set on fire? But no, they're ripping plywood from the building's boarded-up windows.

"Start a chant!" one guy says.

Another guy runs toward the crowd. "Breonna! Taylor!" he shouts, the chant is taken up and covers the sound of a window being broken. A gangly young man sees me scribbling in my pad and approaches. I expect to be told to move. Black bloc policy is not to speak to or be observed by any media.

"Yes," I tell him. I volunteer that I wouldn't want to live next door; that they must be putting up with a lot of noise every night.

"I wouldn't want to live within five blocks of any of the places," he says, meaning the spots he and his fellow black blockers descend on, the PPA, the North Precinct police station, the Justice Center downtown.

I ask him about what happened the night before, that guy being pulled out of the truck. Does black bloc have any feelings about that?

"It's the 7-Eleven kids, the kids that hang out at the 7-Eleven," he says, noting that they're not affiliated with anyone. "The cops know they're there," he adds. "They've got them on video. They should have been there."

Right, but the cops are chasing black bloc all over the city, I remind him. Which seems to give him pause.

"They should have been there," he repeats, showing something less than anarchistic purity.

Across the street, three locals watch what's happening behind the PPA.

"Do you have phones?" a girl asks them. "You're not allowed to film."

"Who says I am not allowed to film?" a woman of about 50 years old responds.

The girl, who is holding a steel baton, repeats, "You're not allowed the film."

"What are you going to do? You are going to kill me?" asks the woman, taking a step toward the girl. "I live on this street. You are not going to tell me what to do."

The girl steps back.

"You have nothing, and I am telling you, your parents did not raise you this way," the woman says, causing the girl to pivot away and look undone, her magic black uniform offering no strength on its own. But she does not run toward her group—not yet—she seems for a moment to absorb the middle ground she's in.

"They are children," the woman, whom I later learn is named Marta, tells me. "I know her parents and grandparents did not raise her to believe this. She is Latina, like me."

Earlier in the day, I'd seen a video from the protests on Saturday night, where cops moved through a shield line like a hot knife through butter, scattering black-clad figures. I'd watched those same people during their pre-protest "shield practice." They'd responded heartily in the affirmative when told, "If you feel like you can put a target on your back, get out there and do it. Hold that line."

There is some comfort in the lack of familiarity these young people exhibit with actual violence or even a little maternal discipline. The tricky part is that the image they are projecting, of people ready to burn down the world, will inevitably attract people with their own agenda, people who will start bigger trouble, or will come to oppose what they see as trouble.

Did I mention the Proud Boys are staging a rally in Portland on Saturday?

The police finally appear tonight. They stretch out in several lines and say not one word. The demonstrators flow among them, shouting in their faces, squeezing piggy squeaker toys and telling the cops to quit their jobs, to kill themselves. The cops do not react; they stand there and let the jibes and provocation flow past them in turn. And then they go back to their vehicles. The demonstrators pursue, the cops toss one smoke bomb, the demonstrators run away. The end. 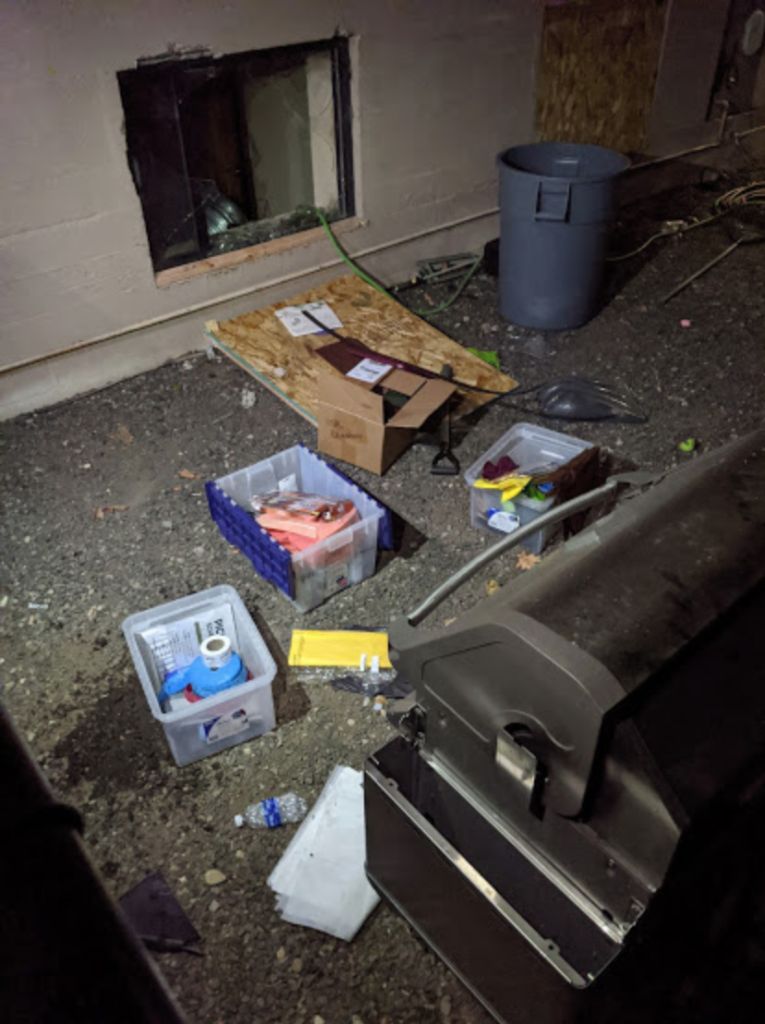 "Do you want to see better?" the gangly boy asks, offering to shine a flashlight over the fence so I can see the extent of tonight's destruction of the PPA: a broken window, a box of Christmas decorations, a cash box holding some old raffle tickets.

"Watch your step," he says, and I climb down from the concrete rise I'm on. The kid is polite, he's maybe 20. He appears uninterested in what's happening at the end of the street: Demetria Hester, a figurehead of BLM, is thrusting her hips in the direction the cops have gone and chanting in her signature rasp, "FUCK the po-lice!" several hundred times. Three young women astride mimic her, with waning enthusiasm.

By midnight, the crowd is again aimless. After listening to Letha Winston, whose son was shot and killed by police, tell them they're "a bunch of clowns" for attacking buildings, the demonstrators debate among themselves where to march and, failing to reach consensus, go their separate ways into the night.

On Tuesday they are back—or some faction is back anyway—setting fire to a building where, as a local politician notes in a statement, "the first same-sex marriage in Oregon took place, and where millions of pieces of personal protective equipment are being distributed to help our community battle COVID-19, was damaged."

Not uncertain, but still oddly directionless, the black bloc marches blindly on. Maybe those heard chanting, "What did you see? Didn't see shit!" as the fire burns have not yet learned it's impossible to build with your eyes closed.