Reason is supported by:
Preston Brown

Our modern age of cartoon absurdity and baroque paranoia existed in miniature for an evening each week in the mid-1990s. Sunday nights on Fox, it was possible to marinate your mind in the anti-authoritarianism of The Simpsons, the populism of King of the Hill, and the free-ranging suspicions of The X-Files, thus spiritually preparing yourself for the world to come.

If you really wanted to prepare yourself, you could tune in an hour earlier for a fourth show. Long before anyone with a phone could load a home movie onto the internet for anyone else to see, you could catch a stunted Hollywood preview of that universe on The World's Funniest!, Fox's ripoff of ABC's America's Funniest Home Videos. (The Fox version wasn't quite as family-friendly as ABC's—an ad touted one episode as "an hourlong tribute to getting hit where it hurts the most.") On World's Funniest, of course, you couldn't share your clips directly with viewers, YouTube-style; a centralized group of studio suits acted as a bottleneck, picking the footage they thought viewers would like and then adding canned laughter and unnecessary sound effects. But it was more participatory than traditional television, and in its awkward, stupid way it offered a foretaste of the DIY media to come.

Then the good shows started. After World's Funniest came the cartoon satire of The Simpsons, one of those vast, allusive texts, like the Bible or the I Ching, that seems to contain all that has ever been and all that ever shall be. A persistent urban legend claims that the show predicted vast swaths of the future, a belief that relies mostly on not remembering just how long various parts of our lives have been around. 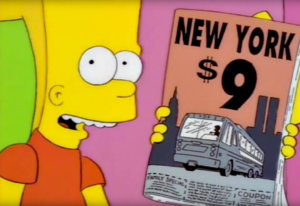 That joke from 2000 about Donald Trump becoming president is less impressive if you recall that Trump dipped his toe into the presidential race that year. That 1994 gag that "predicted" autocorrect seems less spooky if you're aware that autocorrect already existed back then. And that story from 1997 where Bart stands in front of a picture of the World Trade Center that looks like it says "9/11″…OK, that is pretty creepy.

But those purported prophecies aren't the chief reason those early Simpsons episodes feel so resonant today. The program's writers came from a variety of political perspectives but they shared an anti-authoritarian attitude, one that produced the ideal show for an age of plunging trust in social institutions. "The thesis of The Simpsons is nihilism," then-showrunner Al Jean told interviewer Douglas Rushkoff in the early '90s. "There's nothing to believe in anymore once you assume that organized structures and institutions are out to get you." At that point Jean's collaborator Mike Reiss piped up to offer the series' "overarching point": "the media's stupid and manipulative, TV is a narcotic, and all big institutions are corrupt and evil." The only social institution that The Simpsons has reliably presented as more good than bad is the family, and even it gets some rough treatment.

A similar spirit animated the next cartoon on the Fox schedule, King of the Hill: Its populist worldview saw danger in every institution larger than the neighborhood, with the possible exception of the Dallas Cowboys. The locals were all deranged in their own ways too, but they managed to keep each other's excesses in line. Or at least they did back then. Looking back, I can't help noticing that the four men at the center of the series—Hank Hill, Bill Dauterive, Jeff Boomhauer, and Dale Gribble—were a Texas dad nostalgic for the old days, an incel, a pickup artist, and a wild-eyed conspiracy theorist: enough material to fuel a dozen worried op-eds in 2020. One theory of Trump is that he's the president you get if those neighborhood ties fray and all the Hanks, Bills, Boomhauers, and Dales get shaken loose.

In any case, King of the Hill creator Mike Judge owned a VHS tape that he labeled "Three Dales." It featured three conspiracy theorists that he had taped off his local public access TV channel. One of them was Alex Jones.

And then there was The X-Files, an hour-long drama in which two FBI agents went rummaging through Alex Jones' nightmares. The cheap way to connect The X-Files to the present would be to say that it was a show about conspiracies and that conspiracy theories are all over the place today. But conspiracy theories are always all over the place, even when public trust is much higher—they just aren't necessarily aimed in the same direction. So that in itself isn't the big link.

The closer connection is that The X-Files was born right after the end of the Cold War, a moment when Americans no longer had a powerful external foe to serve as a focus for their fears. It became easier to cast those suspicions upward at the government, and easier to adopt a more diffuse dread about an unidentified ethereal enemy. As the present grew more confusing, the past came unmoored as well: The X-Files was constantly rewriting the history of the Cold War, looking back at the institutions that had presented themselves as protecting us and recasting them as a conspiracy against the public. That resonates at a time when the War on Terror—the great mobilizing conflict that eventually filled the space left empty by the Cold War—has been coming unspooled for several years, to the point where a politician can casually declare that the Iraq war was built on lies and then get elected president as a Republican.

And there's another connection. "The central image of threat in The X-Files is infection—a plague that may begin at any point on the globe and spread to any other," the critic Paul Cantor observed in 2001. By the beginning of 2020, viral infection had become the go-to metaphor for any number of real and alleged threats, from gun violence to Russian disinformation. And then, on top of that, we got an actual plague.

Of these programs, only The Simpsons lingers on the air—or at any rate, a zombie bearing its name is still lurching around. But all four are with us in spirit. Fox Mulder, Dale Gribble, Chief Wiggum, and a home movie of a guy getting hit in the groin: you could see them all on a Sunday night in the '90s. And if you want to see them again, just look around.

(Bonus link: I discussed The X-Files on a recent episode of the podcast Pop & Locke.)