When the United States and China called a truce in their trade war late last year, arguably the most important part of the deal was China's promise to increase imports of American goods by $200 billion by the end of 2021.

Don't get me wrong: There were other important details too. The United States agreed to forgo another planned tariff increase that would have hiked prices for many consumer goods, and both sides agreed to a framework for resolving long-standing disagreements over intellectual property. But for President Donald Trump, who has complained for years about America's trade deficit with China, the promise that China would import more American goods was clearly the key element of the bargain—as evidenced by the fact that he keeps talking about it.

So how is China doing? Not great, Bob.

Through the first four months of 2020, China has imported only about 45 percent of what it would have had to buy to be on pace to meet the deal's goals, according to an analysis of trade data from both countries by the Peterson Institute for International Economics (PIIE). The so-called "phase one" deal between the two countries broke down the overall $200 billion promise into smaller, specific targets for agricultural goods, energy, and manufacturing outputs. So far, China does not appear to be close to hitting any of those goals: 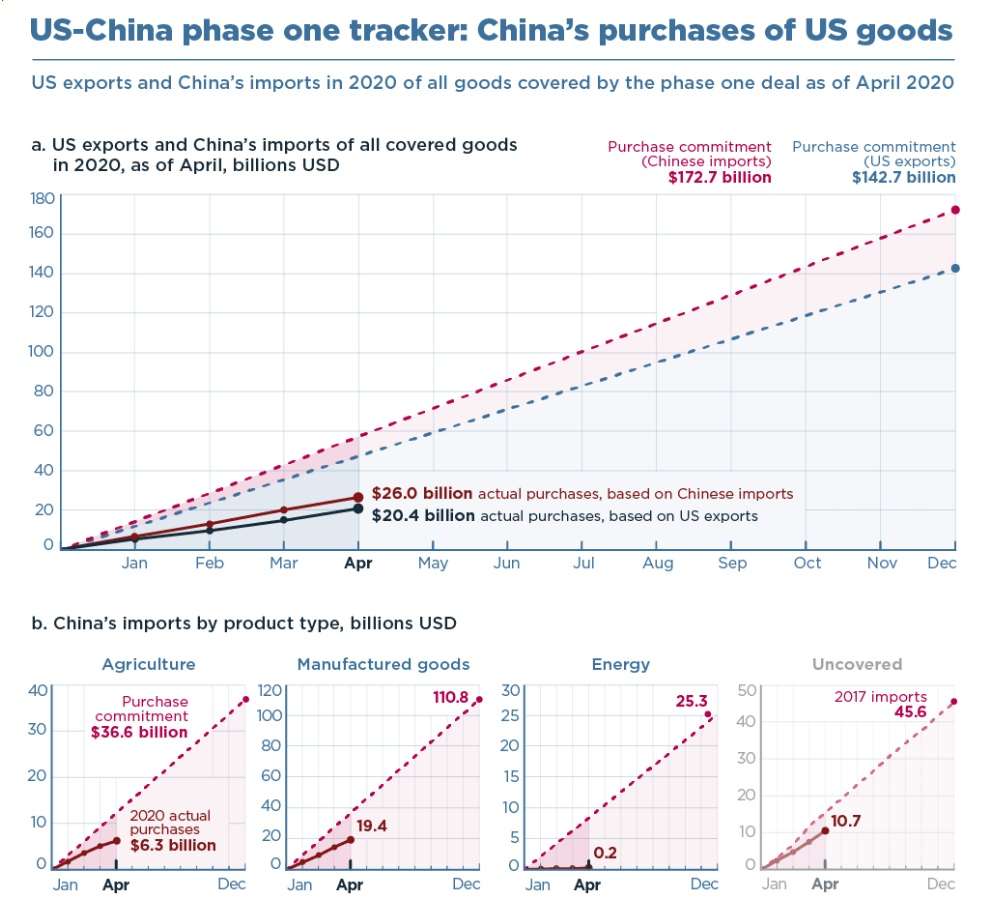 Chad Bown, a senior fellow at PIIE, notes that the deal only stipulates that China must hit the year-end targets this year and next year. Still, the prorated totals for the first third of the year serve an illustrative purpose.

The COVID-19 pandemic is a factor. It has disrupted manufacturing and trade on both sides of the Pacific. But the bigger problem seems to be that the Chinese import targets were never all that realistic to start. As The Wall Street Journal noted shortly after the deal was made public, Trump was effectively asking for "an unprecedented jump in bilateral trade." To meet its obligations, China would have to hike its purchases of U.S. goods by 60 percent over the 2017 (pre–trade war) baseline.

That part of the agreement was "unrealistic at best" from the start, wrote Brookings Institution scholars Joshua Meltzer and Neena Shenai in February. Perhaps worse, the deal actually handed leverage to China for future negotiations. "Because these purchases are not market-based (if they were, the commitments would have been unnecessary), they actually create stronger U.S. dependencies on China," Meltzer and Shenai wrote. "Because of its state-led and controlled economy, China could gin up demand to try and meet these commitments, but the spigot could likewise be turned off at any point and for any reason."

Even if that doesn't happen, forcing the Chinese government to buy more American goods is also a poor way to encourage market reforms in China.

Neither side seems to care much now about the trade deal or the fact that China is unlikely to meet its obligations. This week, the Chinese government asked state-owned companies to stop buying American pork and soybeans in response to the United States threatening retaliation for China's crackdown on Hong Kong. If that happens, China's already-low purchases of U.S. agricultural goods are likely to fall further.

Meanwhile, Trump said last month that he has no interest in revisiting the trade agreement. "Somehow, I lost a little flavor for it," he told reporters on May 15, though he also told Fox Business he was "very disappointed in China" for failing to meet its obligations so far. While Trump's top economic advisers continue to defend the deal, the president's limited attention span seems to be focused elsewhere.

It now seems like the trade deal was always more of a political prop than anything else—a way for Trump to tout the supposed success of his trade war as he ran for re-election, while postponing any additional tariff increases until at least 2021. Shortly after the "big, beautiful" deal was signed in January, for example, he told farmers at a rally in Ohio they'd have to "buy bigger tractors" in order to meet the new demand from China.

But farmers, who have already borne the brunt of the Trump administration's costly trade policies, are likely to get shortchanged again. The Trump administration is reportedly preparing another round of federal bailouts for farmers hurt by the trade war—a far cry from the promise that a deal with China would motivate farmers to buy bigger tractors.

Now that the Republican Party has decided its 2020 campaign strategy will be focused on anti-China hawkery, last year's limited trade agreement probably matters less than it ever did. The only concrete accomplishment of Trump's economically destructive trade war is looking like a dud.