American manufacturers have filed more than 100,000 requests for relief from the Trump administration's steel tariffs. Take a close look at which requests have been denied, and you'll glimpse the depth of the cronyism contained in this scheme.

Since June of last year, the Commerce Department has granted just 1 percent of the exemption requests that were challenged by domestic steel producers, according to government data aggregated by researchers at the Mercatus Center. By comparison, the department has granted 70 percent of the exemptions that were not challenged by domestic steelmakers. 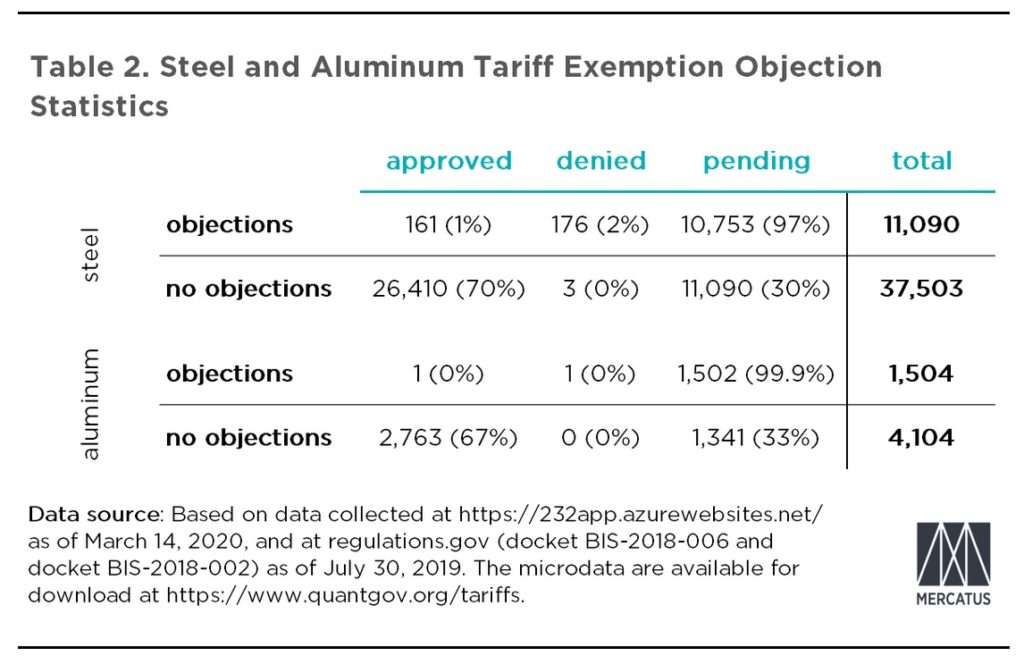 When Trump imposed a 25 percent tariff on imported steel in March 2018, he also instructed the Commerce Department to allow American businesses to seek exemptions from those tariffs, which can be granted if domestic metal supplies are shown to be insufficient for a company's needs.

This "tariff exclusion process" is stacked against American steel-consuming businesses in several important ways. After exemption requests are filed with the department, steel producers are allowed to challenge those requests. Such an objection can not be challenged by the business that first filed the request. The criteria for determining whether a request is granted or denied is murky at best. Business owners have complained that simply getting a decision one way or the other can take months. And there is no way to appeal the department's ruling.

Members of Congress have warned that the process lacks "basic due process and procedural fairness" and that it could be "abused for anticompetitive purposes." After two years, the government's own data suggests that's exactly what has happened.

The steel tariffs were implemented under Section 232 of the Trade Expansion Act of 1962, which allows presidents to impose tariffs for national security reasons—not for purposes of economic protectionism. But protectionism appears to be a major factor in determining whether tariff exemptions are granted. American steelmakers appear to have significant influence over what is supposed to be an unbiased process.

Of course, the process was never really meant to be unbiased. Administration officials had a series of meetings with "interested parties" in the weeks before the tariff exclusion process was established, according to an October 2019 report filed by the Commerce Department's inspector general. The report found no written summaries of more than 100 meetings and telephone calls that took place during March 2018.

"This gives the appearance that Department officials may not be impartial or transparent and are potentially making decisions based on evidence not contained in the official record for specific exclusion requests," the report concluded. The inspector general called on department officials to improve the transparency of the tariff exclusion process and to implement a formal appeals process.

There is also a tremendous backlog—more than 40,000 exemption requests are currently "pending," according to the Mercatus analysis of federal data. And the exemptions last for just one year, so even companies that do successfully navigate the cumbersome process are never really free from it.

American businesses that rely on imported steel may be breathing a small sigh of relief after President Donald Trump granted a pandemic-inspired three-month delay for some tariff payments. Still, the Mercatus Center's analysis of the latest federal data—which includes exemption requests filed, denied, and approved through March 14—suggests that cronyism remains alive and well within the tariff bureaucracy.

The steel tariffs have done little to boost domestic steel production, and it may have contributed to job losses in the industry. But they did give birth to a protectionist racket.