Eight of the top 10 hotspots for the COVID-19 cases in the U.S. are connected to jails and prisons, according to data from The New York Times.

The largest COVID-19 cluster in the country is at Marion Correctional Institution in Marion, Ohio, where there are 2,197 infected inmates—more than 80 percent of the prison's population.

"As recently as yesterday, we have inmates in here that can't even walk and breathe because of the virus," Austin Cooper, an inmate at the prison, told local news outlet ABC News 5. "Medical just keeps sending them back out here to the camp, talking about they can't do nothing for them." 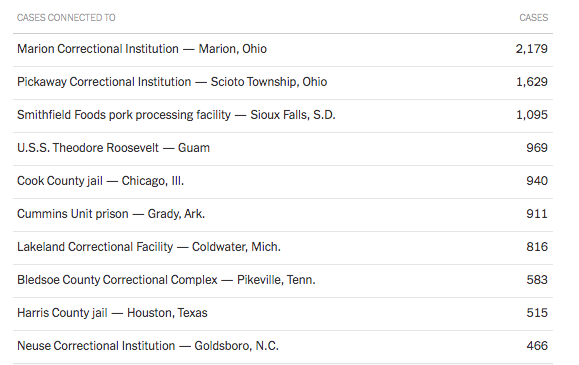 Other clusters include Lakeland Correctional Facility in Michigan, where more than 600 inmates have tested positive; the Cook County Jail in Illinois, which is nearing 1,000 positive cases; and Pickaway Correctional Institution in Ohio—the second-largest COVID-19 cluster in the country with 1,629 cases.

The only two hotspots on the top 10 list that aren't prisons or jails are a pork processing plant in South Dakota and the U.S.S. Theodore Roosevelt aircraft carrier.

The numbers and dire news stories underscore what civil liberties groups and correctional officer unions have been trying to warn local, state, and federal agencies about since COVID-19 reached the country: that jails and prisons were woefully unprepared to handle an epidemic, and that those institutions would inevitably spread the virus into nearby communities unless drastic measures were taken.

WBUR reported Tuesday that COVID-19 has infected nearly 15,000 inmates and corrections staff across the country and killed more than 130.

More worryingly, the infection numbers above are likely undercounts because of the lack of widespread testing in federal, state, and local lockups.

"We are likely facing massive loss of life—both in jails and in communities around the country—if dramatic steps aren't taken to reduce the incarcerated population in this country," Udi Ofer, director of the ACLU's Justice Division, said in a press release. "Mass incarceration was a major public health crisis before the outbreak of COVID-19, but this pandemic has pushed it past the breaking point. The revolving doors of jails make them a tinderbox for COVID-19 spread within our communities. This data is a wakeup call as to the true cost of 50 years of mass incarceration and its impact on communities across the nation, disproportionately communities of color."

Many district attorney's offices, jails, and prisons took unprecedented steps to halt the flow of more people into the criminal justice system and get some at-risk inmates out of harm's way, but it still hasn't been enough to stop the virus from tearing through many facilities.

In the Federal Bureau of Prisons (BOP), 1,314 inmates and 335 staff have tested positive for the virus. Federal Medical Center Fort Worth, a federal prison in Texas, announced on Monday that 234 inmates had tested positive, following expanded testing.

"We live shoulder to shoulder," Coty Franks, an FMC Fort Worth inmate, told NBC DFW. "Literally the only time I'm not standing or sitting next to someone is in the shower."

As Reason reported, the BOP announced the first female federal inmate died Tuesday. She was 30 years old and delivered a child via an emergency cesarean section while ventilated.