Stay really, really at home now? On Saturday, White House coronavirus response coordinator Deborah Birx said of the next two weeks: "This is the moment to not be going to the grocery store, not going to the pharmacy, but doing everything you can to keep your family and your friends safe."

Yikes. Keeping safe now means avoiding shopping for even food, toiletries, and medicine? No wonder President Donald Trump has been hoping so hard for hydroxychloroquine to work against COVID-19.

But Trump advisor and infectious disease expert Anthony Fauci isn't so sure about the anti-malarial drug as a cure for the new coronavirus. In a meeting Saturday, "Fauci pushed back against [economic adviser Peter] Navarro, saying that there was only anecdotal evidence" for it, reports Jonathan Swan at Axios. More:

Eventually, [Jared] Kushner turned to Navarro and said, "Peter, take yes for an answer," because most everyone agreed, by that time, it was important to surge the supply of the drug to hot zones.

The principals agreed that the administration's public stance should be that the decision to use the drug is between doctors and patients.

Trump ended up announcing at his press conference that he had 29 million doses of hydroxychloroquine in the Strategic National Stockpile.

One thing driving this may be a desire not to drop the ball again on COVID-19 prep, as the administration has already done with tests, masks, and ventilators. Not that Trump will admit his team has faltered in the slightest. He's spent the past week bragging about how big his backup of medical supplies is, while simultaneously declaring this Strategic National Stockpile mostly off-limits to American states.

The president now regularly describes the supply of ventilators and masks in terms of negotiations he allegedly made well and states didn't, making this into a competition where there should be cooperation to save lives.

Last week—after Trump advisor and son-in-law Jared Kushner called it "our" stockpile at press conference ("our" meaning the federal government, Trump clarified) and Trump scoffed at states like New York for lacking supplies—the language on the Strategic National Stockpile's website was changed: 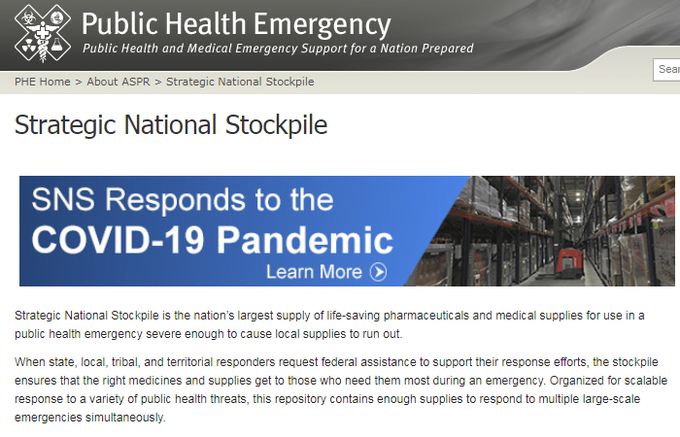 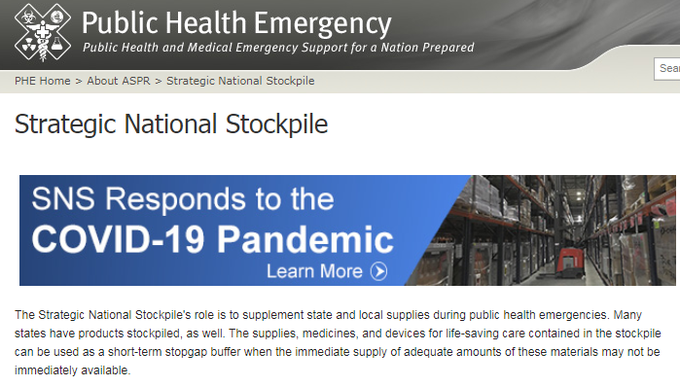 But while Trump has been bashing state leaders for not stocking up pre-pandemic, the federal government waited until mid-March to bolster its supplies, according to a new report from the Associated Press. AP's review of federal purchases "shows federal agencies largely waited until mid-March to begin placing bulk orders of N95 respirator masks, mechanical ventilators and other equipment needed by front-line health care workers."

By the time these agencies were starting to place orders, "hospitals in several states were treating thousands of infected patients without adequate equipment and were pleading for shipments from the Strategic National Stockpile," AP reports. The stockpile is "now nearly drained."

If hydroxychloroquine may be useful, it's not unreasonable for Trump to want to get an early jump on that. ("If it does work, it would be a shame we did not do it early," as Trump said on Saturday.) And Trump's underlying rhetoric about people and hospitals having the right to decide for themselves about experimental cures is also sound. ("It's their choice. And it's their doctor's choice," Trump said Saturday.) It has a lot in common with more general arguments for "right to try" laws—but with a critical difference, too.

Right-to-try advocates generally argue that when specific people are dying from diseases that can't be cured by treatments the Food and Drug Administration has approved, they should be able to try experimental drugs, generally ones that have proved promising in clinical trials or are already approved in other countries. They don't generally push for masses of patients to try barely tested and potentially risky cures for communicable diseases on a whim or a hunch.

So far, the case for hydroxychloroquine amounts to little more than a handful of studies with no control patients and a report from Chinese doctors posted to a non-peer-reviewed website. The Chinese doctors said that in a small sample of patients with mild to moderate cases of COVID-19, hydroxychloroquine seemed to help fevers and pneumonia dissipate faster and may have helped stop cases from turning more severe. It was not tested on severe or asymptomatic cases.

All that said, it's certainly preferable that doctors can try treating patients with hydroxychloroquine without federal bureaucrats saying they must wait until we've done years of trials.

"With no proven treatment for the coronavirus, many hospitals have simply been giving hydroxychloroquine to patients, reasoning that it might help and probably will not hurt, because it is relatively safe," notes The New York Times.

But some doctors note that while hydroxychloroquine may be relatively safe, it's far from harmless. "There are side effects to hydroxychloroquine," Brown University emergency physician Megan L. Ranney told the Times. "It causes psychiatric symptoms, cardiac problems and a host of other bad side effects."

Against pantry policing. Shaming people for their pandemic-time purchases has become a new national pastime. At Arc Digital, Phoebe Maltz Bovy takes a calm look at how people are responding to the fact that "slowly yet suddenly, everything changed":

Human activity has been divided into the essential and the inessential, with breathing falling into the former category (as long as there are ventilators available, at least) and just about everything else, the latter. Office jobs, clothes-shopping, bar-going, sex (or just in-person conversation) with anyone you don't happen to live with—all of these everyday pursuits have been put on hold, their eventual return uncertain.

Falling somewhere ambiguous between necessity and frivolity, however, is food. On the one hand, we've all got to eat. On the other, the discourse about eating in the era of coronavirus has a way of suggesting food is a luxury, a pseudo-requirement the more noble among us would somehow transcend. As though if you believe yourself and your family entitled to food, now and in the foreseeable future, then you're exhibiting a level of unacceptable entitlement….

A figure has emerged of the Bad Grocery-Shopper, the proverbial Karen who buys more than is correct (even though, and I cannot emphasize this enough, no one knows or can know what "correct" would mean), and who is definitely, definitely buying toilet paper in excess. Indifferent to the fate of her local businesses (or, perhaps, newly unemployed herself?), she isn't even sending a few bucks here and there to her preferred bars and cafés. The problem isn't coronavirus; it is—it's soothing to think, apparently—middle-aged, middle-class women buying groceries for their families.

Businesses are beginning to sue over mandatory shutdown orders. From The New York Times:

Some of those suing their state governments seek redress for specific, local grievances, as with the [Blueberry Hill Public Golf Course and Lounge lawsuit] or in a similar suit in Pennsylvania being pursued by a company that says it is the country's oldest manufacturer of orchestra-quality bells and chimes. Those lawsuits and one in Arizona are rooted in the Fifth Amendment, which requires due process and guarantees compensation for property seized by the government.

Other constitutional amendments have been invoked in several lawsuits in recent weeks attempting to force open gun stores, or to argue that measures to curb the virus should not outweigh rights like freedom of assembly and religion.

"Those may be serious, but they may also be part of an attempt to make an argument in the press about overreach," said Tom Burke, a political-science professor at Wellesley College who studies the politics of litigation.

History dating back to the time of 15th-century plagues shows that lawsuits typically plummet during pandemics, Mr. Burke said, for the obvious reason that courts are closed. But legal experts anticipate a tidal wave of court activity afterward—especially in fields like insurance and debt collection—because of the economic dislocation caused by the pandemic.

We get it, we're in the simulation https://t.co/FL8aUjX84W