The number of confirmed COVID-19 infections in New York City's prison population (both workers and inmates) has more than doubled in just two days.

As of Wednesday morning, New York City's Department of Correction reported that 75 people in the city's jail system have been diagnosed with COVID-19, and that 37 of them are facility personnel. This is a dramatic increase since the weekend, when officials reported 17 workers and 21 prisoners were infected. The number of infected inmates jumped to 50 on Monday and continues to increase.

Mayor Bill de Blasio said Tuesday that New York will release another 300 nonviolent inmates from Rikers Island who have been serving sentences of less than a year for misdemeanors. But he said that his authority as mayor to free people from jail is limited and he needs the state and prosecutors to help increase those numbers.

This should be a high priority for state and local governments around the country. The prison complex needs its own system to "flatten the curve" and reduce disease transmission. New York City has 5,000 inmates, in close quarters, mostly on Rikers Island. They are not engaged in "social distancing." Health officials warn that Rikers will essentially become an incubator to spread the virus.

Meanwhile, the New York Police Department is reporting that 211 of its employees have been diagnosed with coronavirus, 177 of them uniformed officers. About 3,200 officers have called in sick, which is triple the normal rate. New York City now has more than 17,000 diagnosed infections out of 55,000 confirmed cases nationwide.

Crime, by the way, continues to fall in New York City as this pandemic cleans out the streets. Criminals thus far do not appear to be taking advantage of the situation, though NYPD Commissioner Dermot Shea worried that the dramatic decline in sexual assaults and domestic abuse is actually a result of victims not reporting the incidents to police.

As is often the case whenever we debate reducing jail populations, a common response is that every person currently behind bars deserves to be there. That argument has two problems: the first is that having been convicted of a crime doesn't make you more deserving of being exposed to a painful and potentially fatal virus (and that includes Harvey Weinstein); the length of time for which a prisoner is incarcerated is their punishment, they do not also "deserve" to be infected with COVID-19, any more than they "deserve" to be sexually assaulted or tortured. The second issue, and one that is particularly relevant when discussing Rikers, is that our jails are full of people who have not been convicted or are serving short sentences for minor offenses.

With impeccable timing, the nonprofit Prison Policy Initiative has just released its regular report calculating how many people are locked up in America and why. Local jails across the United States hold 470,000 people who are awaiting trial and have not been convicted. Of the 161,000 people convicted of crimes who are serving time in local jails (as opposed to state prisons), 86,000 of them are incarcerated due to drug or public order crimes. 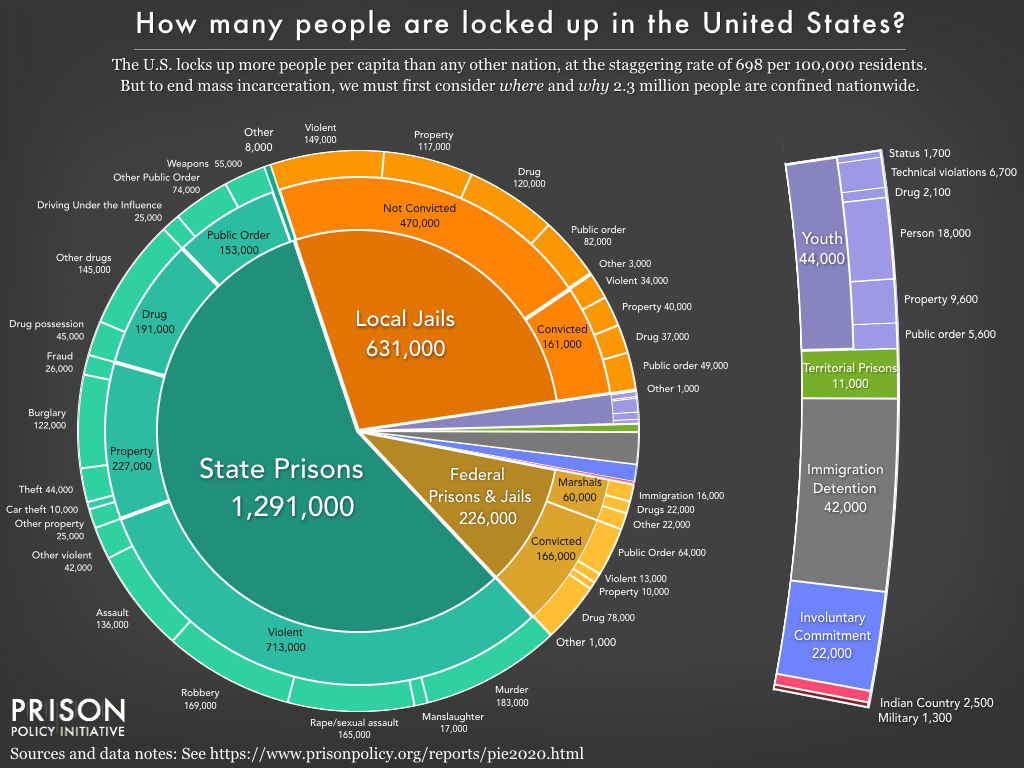 If we prioritize releasing people who aren't dangerous or haven't committed violent crimes, then the prison system would be better able to control the spread of the coronavirus among the people who are too dangerous to be released.

Yesterday, Gov. Andrew Cuomo insisted "We're not going to put a dollar figure on human life" as he justified ignoring the economic impacts of closing down businesses the state deems "non-essential." But New York's jail system is doing exactly that by slow-rolling the population reductions that will help reduce the risk of exposure for both inmates and jail personnel.