The Democratic presidential field remains one of the most wide-open races in recent political memory, but two of the top campaigns spent the weekend acting like it's all come down to them. If they're right, libertarians might want to find somewhere to hide for the next four years.

On Monday, former New York City Mayor Michael Bloomberg posted an online ad that criticized Sen. Bernie Sanders (I–Vt.)—and his aggressive online supporters, the Bernie bros—for engaging in Trump-like campaign tactics. That ad came after days of stepped-up criticism from Sanders, who has called attention to Bloomberg's support for stop-and-frisk and accused the former mayor of trying to buy the Democratic nomination.

We need to unite to defeat Trump in November. This type of "energy" is not going to get us there. https://t.co/bPuUZMs2d6 pic.twitter.com/Tdp6mpWjcX

Sanders responded by pointing out that Bloomberg has some bros of his own. 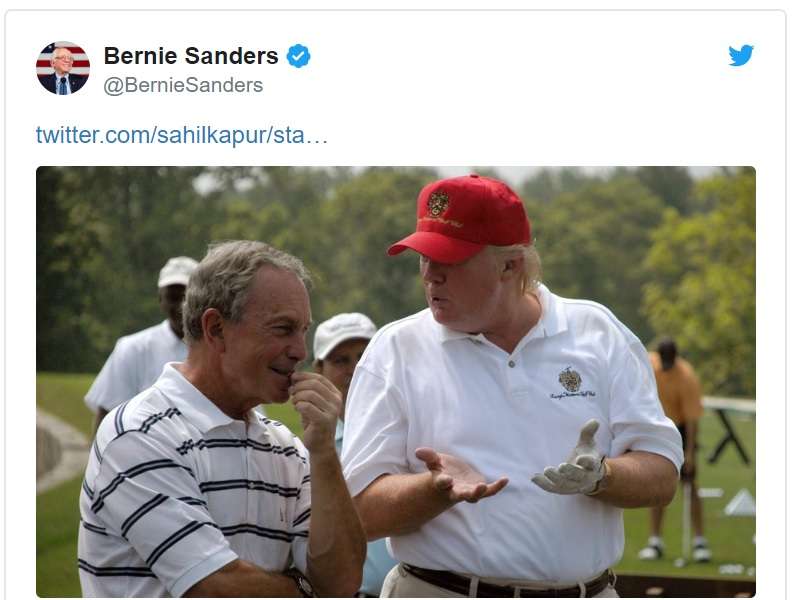 The increasingly nasty sniping between Sanders and Bloomberg suggests that each man sees the other as his biggest rival. Sanders is coming off strong if not convincing performances in Iowa and New Hampshire, while Bloomberg's poll numbers are being carried skyward by a golden rocket of advertising. The socialist and the billionaire will square off in Wednesday's debate in Las Vegas—the first debate for which Bloomberg has qualified after his late entry into the race.

While many other outcomes remain possible, it's easy to imagine Sanders consolidating the progressive lane and centrist Democrats lining up behind Bloomberg for lack of a better alternative (assuming former Vice President Joe Biden can't pull out of his current nose-dive).

Facing the prospect of a second Trump term or Sanders' promised revolution, some voters are understandably tempted to see Bloomberg as the moderate alternative. That, as New York Times columnist Ross Douthat warns, dangerously underestimates Bloomberg's own authoritarian tendencies:

Trump's authoritarian tendencies are naked on his Twitter feed, but Bloomberg's imperial instincts, his indifference to limits on his power, are a conspicuous feature of his career. Trump jokes about running for a third term; Bloomberg actually managed it, bulldozing through the necessary legal changes. Trump tries to bully the F.B.I. and undermine civil liberties; Bloomberg ran New York as a miniature surveillance state. Trump has cowed the Republican Party with celebrity and bombast; Bloomberg has spent his political career buying organizations and politicians that might otherwise impede him. Trump blusters and bullies the press; Bloomberg literally owns a major media organization. Trump has Putin envy; Bloomberg hearts Xi Jinping.

Bloomberg is right that Sanders' supporters can be awful and trollish, and that Sanders has not done enough to tamp down the toxicity. Sanders is right that Bloomberg has an awful track record that should disqualify his candidacy among large swaths of Democratic voters. There's still plenty of time for Democrats to choose someone else—but it might be time to start bracing for the worst.

As often happens with these kinds of proposals, there seems to have been some confusion about what weapons, exactly, Northam's proposal would have targeted. In voting to shelve the bill, state Sen. Creigh Deeds (D–Bath) told the Associated Press "there are obviously a lot of questions about definitions in this bill. Definitions do matter."

The U.S. Court of International Trade temporarily ordered customs agents not to collect tariffs on products like nails and steel cables. The court is reviewing a challenge brought by PrimeSource Building Products that seeks to overturn the Trump administration's expansion of steel tariffs onto finished products that contain steel. That broadening of the steel tariffs—announced in January and implemented on February 8—was supposed to offer some protection to American companies that make steel products. Those companies had been hit particularly hard by Trump's steel tariffs because the additional import taxes had raised input costs.

But the trade court has looked skeptically on Trump's use of a 1962 law that grants presidential authority to implement tariffs for national security purposes. When Trump tried to double steel tariffs on Turkey last year during a diplomatic dispute, the same court struck down that action on the grounds that the Trump administration offered no "rational justification tethered to" the law's national security purpose.

In light of that ruling, it is likely the court will block Trump's latest tariff actions too, Heritage Foundation economist Tori Smith told Reuters. She said the 1962 Trade Expansion Act's tariff powers are "a broken trade law that the Trump administration continues to abuse."

If you want to be president of a country—any country—it's probably a good idea to be at least a little bit familiar with the leaders of neighboring countries that are also major economic partners. Unfortunately, both billionaire philanthropist Tom Steyer and U.S. Sen. Amy Klobuchar (D–Minn.) flubbed on-camera interviews with Telemundo when they couldn't name the president of Mexico: Andrés Manuel López Obrador.

Steyer is essentially a presidential campaign tourist booked on the all-exclusive insider experience package, but Klobuchar serves on the Senate Judiciary Committee's subcommittee on border security and immigration. And the interviewer did not let her off the hook. Seriously, the full video is brutal.

Being qualified to be president means a lot more than simply rattling off the names of foreign leaders, of course, but this isn't a good look.