Predictions of catastrophic climate change by the end of this century are mostly based on a greenhouse gas emissions scenario fetchingly entitled "Representative Concentration Pathway 8.5" (RCP8.5). In RCP8.5, humanity greatly boosts the concentrations of greenhouse gases in the atmosphere by increasing the amount of coal it burns five-fold. This scenario, instead of being treated as a very unlikely worst case, has been frequently described by climate researchers and journalists as a baseline for future emissions and temperature projections. In an email, Breakthrough Institute director of climate and energy Zeke Hausfather observes that the RCP8.5 "emissions scenario has been referred to a 'business as usual' in thousands of published papers."

Consequently, it is not surprising that the climate change literature is replete with studies stoked with RCP8.5 worst-case emissions inputs concluding that business-as-usual ends in a worst-case global temperature apocalypse. For example, journalist David Wallace-Wells relied on RCP8.5 when he warned in his 2019 book, The Uninhabitable Earth: Life After Warming, that "a five-degree increase in temperatures would make parts of the planet unsurvivable."

"Model projections rely on two things to accurately match observations: accurate modeling of climate physics and accurate assumptions around future emissions of CO2 and other factors affecting the climate," explain climate researchers in a new study in Geophysical Research Letters. "The best physics‐based model will still be inaccurate if it is driven by future changes in emissions that differ from reality." They report that early climate models, once actual greenhouse gas and aerosol pollution emissions are inputted, have been pretty good at projecting global average temperature trends over the past three decades. This suggests, at least in the models evaluated in that study, that their internal physics are, broadly speaking, correct.

In the current issue of Nature, Hausfather and Glen P. Peters, the research director at the Center for International Climate Research in Oslo, Norway, urgently appeal to climate researchers to use more realistic emissions scenarios as baselines for the climate change projections to be reported in the Intergovernmental Panel on Climate Change's (IPCC) Sixth Assessment Report's (AR6) due in April 2021.

Hausfather and Peters note that researchers have devised 5 Shared Socioeconomic Pathways (SSPs) outlining various population, technological, and energy trends to use as inputs into the AR6 climate models. Taking into account the more plausible emissions scenarios among the SSPs, they conclude that "assessment of current policies suggests that the world is on course for around 3°C of warming above pre-industrial levels by the end of the century." They think that's "still a catastrophic outcome," but it's a long way from 5°C projections based on the worst-case RCP8.5 scenario. Even climate doomster Wallace-Wells recently conceded about the climate future that "it's not as bad as it once looked." 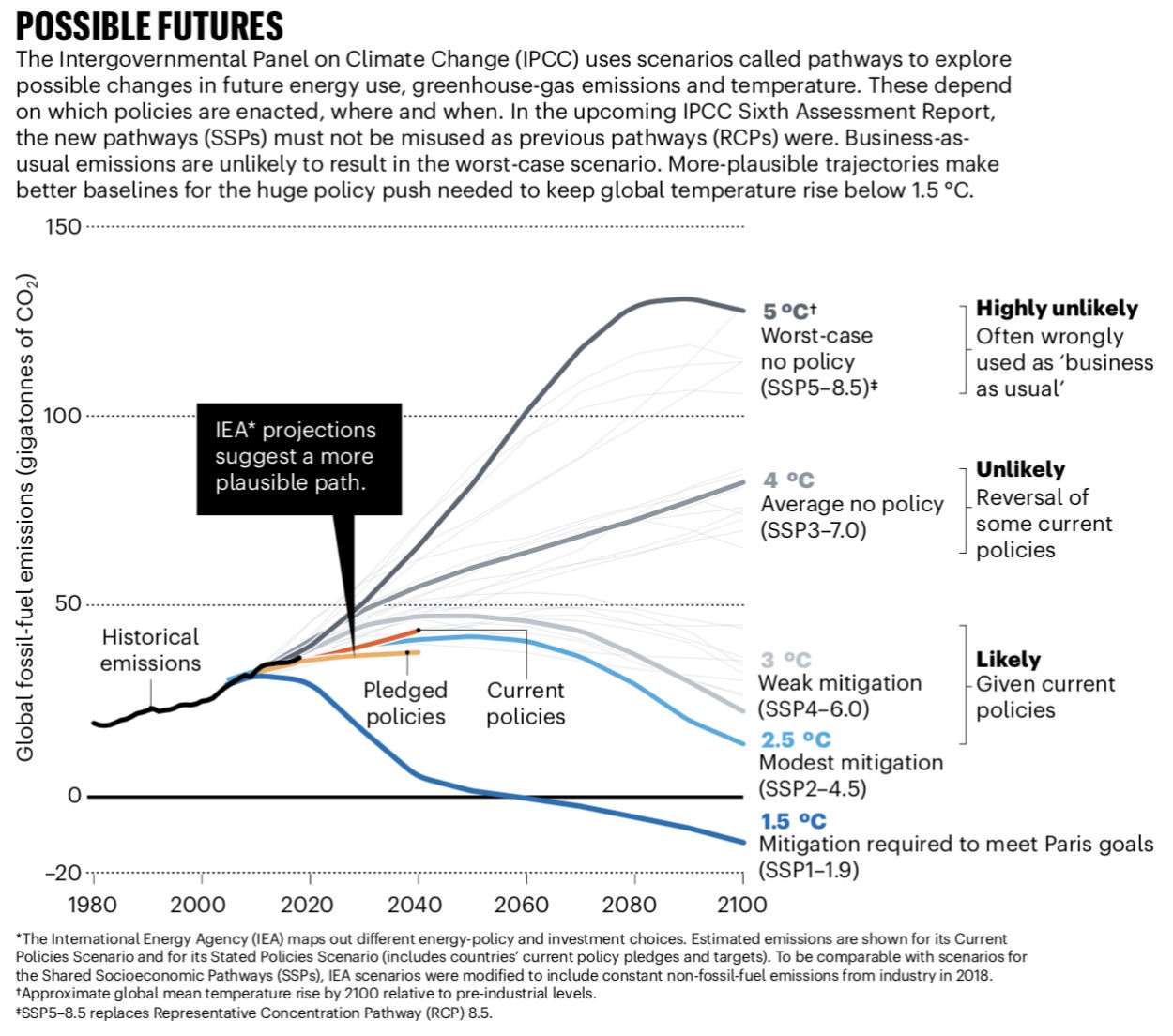 "We must all—from physical scientists and climate-impact modelers to communicators
and policymakers—stop presenting the worst-case scenario as the most likely one. Overstating the likelihood of extreme climate impacts can make mitigation seem harder than it actually is," they write. "This could lead to defeatism, because the problem is perceived as being out of control and unsolvable. Pressingly, it might result in poor planning, whereas a more realistic range of baseline scenarios will strengthen the assessment of climate risk."

Disclosure: I have had the pleasure of attending and participating in several Breakthrough Dialogues.