As I watched last night's three-hour-long debate among seven Democratic presidential candidates, my mind wandered not out of boredom but frustration. When candidates such as former Vice President Joe Biden, Sens. Elizabeth Warren and Bernie Sanders, and Mayor Pete Buttigieg laid out their plans for grand, transformative change in America via the federal government, they did so without hesitation or any sense of recent history. In this, they are of course joined by Donald Trump, who has presided over budgets and deficits that are historically high for peacetime.

Between jabs about fundraisers in wine caves with chrystals and $900 bottle service, the Democrats mostly squabbled over some of the small stuff—whether all college loans should be forgiven or just 95 percent of them—while acting as if radically expanding the size, scope, and spending of government had never been tried.

Thus Joe Biden, who has been in the Senate since the early 1970s, can blithely call for tax hikes twice as big as Hillary Clinton proposed way back in 2016, and he does so mostly to expand Obamacare, the program that was supposed to fix health care once and for all. Bernie Sanders and Elizabeth Warren can call for an infinite amount of new spending that can supposedly be financed by taxes on the "tippy top" of the U.S. income distribution. Even Mayor Pete, the supposed Midwestern moderate, is calling for free college for families making up to $100,000 or more, depending on the number of children. (The median household income is $63,179, to give some perspective.)

At the same time, Donald Trump and his party are signing off on paid family leave for federal workers (in a defense bill, of all things), a policy that hurts gender equity in the workplace and was unthinkable to Republicans only a few years ago.

The candidates and the incumbent would do well to read Amity Shlaes' new book. Great Society: A New History tells about Lyndon Johnson's well-intentioned but failed attempt in the 1960s to build what he called

a place where every child can find knowledge to enrich his mind and to enlarge his talents. It is a place where leisure is a welcome chance to build and reflect, not a feared cause of boredom and restlessness. It is a place where the city of man serves not only the needs of the body and the demands of commerce but the desire for beauty and the hunger for community.

Thus, the War on Poverty, which didn't eradicate poverty; a host of welfare programs that were partly dismantled in the late 1990s after their failure became inescapable even to early supporters; and the creation of Medicare, a health-insurance program for the elderly that is bankrupting the federal budget, and Medicaid, a health-insurance program for low-income Americans that despite its massive costs is in some important respects worse than no coverage at all. (A major 2013 New England Journal of Medicine study found that "Medicaid Has No Effect on Measured Health Outcomes.") 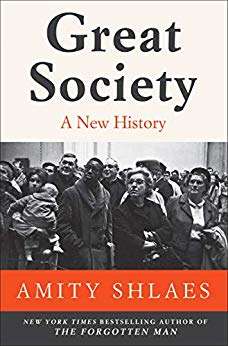 Lord knows that in today's America, we could use some beautiful and transcendent goals. But the lessons from the Great Society era are clear: Yesterday's grand solutions often provide today's problems. In 1966, for instance, government analysts predicted that Medicare would cost about $12 billion in 1990 (in inflation-adjusted dollars). The actual cost was north of $100 billion, and Medicare remains the single-biggest driver of growth in the federal budget. In 2009, President Barack Obama's chief economic advisor, Christina Romer, released a study that concluded, "Nearly 30 percent of Medicare's costs could be saved without adverse health consequences." Yet here we are in the 2020 race, where the big divide is between Democratic candidates who believe in "Medicare for All" and those who back "Medicare for All Who Want It."

"Just as the 1960s forgot the failure of the 1930s, we today forget the failures of the 1960s," writes Shlaes. "For today, the contest between capitalism and socialism is on again." Progressive proposals "from redistribution via taxation to sudent debt relief to a universal basic income" are regaining popularity. Meanwhile, President Trump has ended the Republican Party's rhetoric of fiscal responsibility and limited government. If that rhetoric was never particularly convincing—surely we all can remember the disastrous George W. Bush presidency, when the government grew in practically every way possible—it at least kept alive a tradition that seems more relevant now than ever.

Shlaes is best known for The Forgotten Man, a bestselling revisionist history of the Great Depression that argued that President Franklin Roosevelt's "bold, persistent experimentation" prolonged rather than ameliorated economic collapse. In a recent interview with me, she likened LBJ's Great Society to a domestic-policy version of his disastrous intervention in Vietnam, when the "best and the brightest" minds of American politics assured a quick and important victory. She also added that it wasn't just LBJ and Democrats who pushed the Great Society and Vietnam—Richard Nixon and other Republicans helped sustain and even expand their goals, programs, and costs. "May this book serve as a cautionary tale of lovable people who, despite themselves, hurt those they loved," writes Shlaes. "Nothing is new. It is just forgotten."

I didn't go into last night's debate expecting any of the candidates to start talking about the limits of government's ability to instantly and easily reshape the world. I don't expect Donald Trump, who likes power the way some people like cocaine, to shrink the size, scope, and spending of government. But surely it's not too much to ask for a little skepticism, especially when the near past is so close at hand.