Even in the midst of a divisive and angry impeachment proceeding, Republicans and Democrats somehow find a way to make common cause when it comes to spending and borrowing more and more money. The Washington Post reports that "top congressional negotiators said Thursday they had reached a deal in principle to approve $1.3 trillion in federal spending for 2020, likely averting a government shutdown next week." This is the bipartisanship that so many high-minded politicos and journalists call for, and it's killing our economic future (more on that in a moment).

The House of Representatives, controlled by the Democrats, just passed a "progressive" defense spending bill that totals $738 billion, or "$120 billion more than what President Obama left us with," in the words of Rep. Ro Khanna (D–Calif.). Is America under $120 billion more military threats since January 2017? Of course not, but why live in reality when make-believe is so much more fun? The bill is considered progressive only because it includes "paid parental leave for federal workers," a long-sought goal of liberal Democrats and, not unimportantly, President Trump, who is urging "don't delay this anymore! I will sign this historic defense legislation immediately!" Next week, the Republican-controlled Senate is expected to pass similar legislation that includes the family leave plan along with money to establish Trump's new Space Force and "the largest pay increase for uniformed service members in 10 years."

So, despite impeachment proceedings and other disagreements, Congress and the president are pulling in the same direction and digging deep into the pockets and couch cushions of current and future taxpayers. Such bipartisanship doesn't come cheap, of course. The deficit for fiscal 2019, which ended in September, was $984 billion. Total outlays clocked in at $4.447 trillion, with revenues reaching $3.462 trillion, both record amounts. For the first two months of fiscal 2020, deficits came in at $342 billion, a 12 percent increase over the same period in a previous year despite revenues climbing by 3 percent. Like GM before it was bailed out, America is losing money despite bringing in more cash than ever before.

The Congressional Budget Office (CBO) is now projecting annual deficits in excess of $1 trillion in each of the next 10 years: 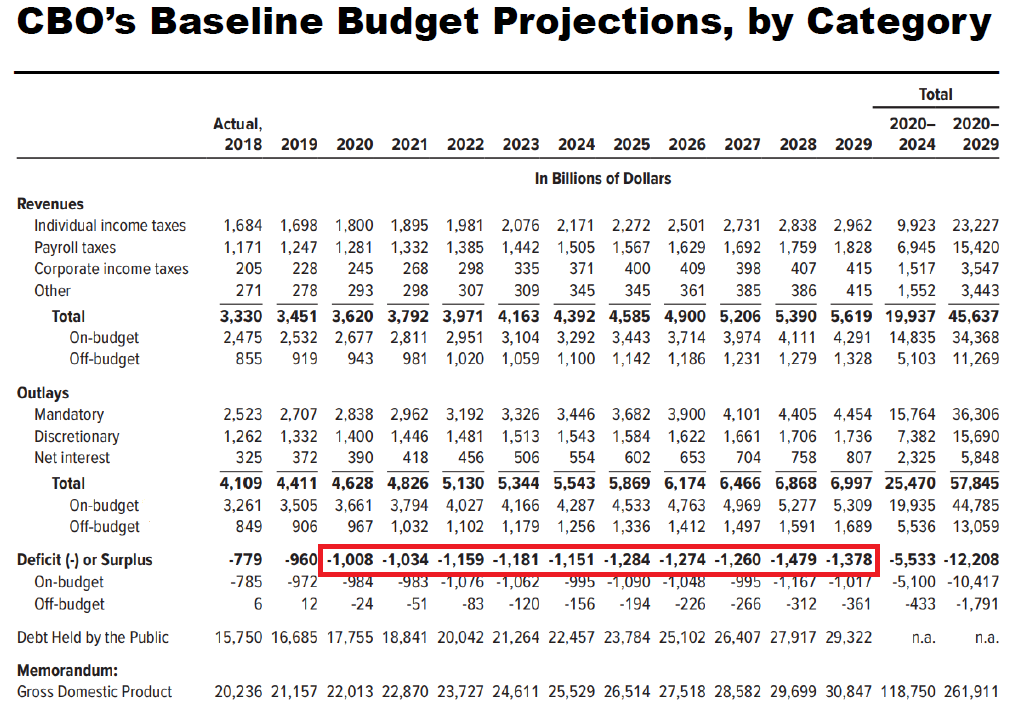 Just a few years ago, such a scenario seemed unimaginable, at least rhetorically. Even while Democrats were often identified as the party of out-of-control deficit spending (fact check: both parties are terrible on this score), they at least paid lip service to the need to rein in the national debt. During its 2008 national convention, for instance, virtually every major figure in the party inveighed against "dangerous fiscal irresponsibility" (to quote Sen. Evan Bayh of Indiana). The party's official platform promised:

We will maintain fiscal responsibility, so that we do not mortgage our children's future on a mountain of debt.

Barack Obama even openly campaigned on a "net spending cut":

"What I've done throughout this campaign is to propose a net spending cut," Obama said in his final pre-election debate with McCain [in 2008]. "I have been a strong proponent of pay as you go. Every dollar [in spending] that I've proposed, I've proposed an additional cut so that it matches."

Of course, once Obama and the Democrats took power, they stopped talking about fiscal responsibility and all that. The Republicans took up the slack and constantly criticized deficit spending, right up until the moment they regained control of the purse strings.

For most of the 21st century, one of the two major parties could be counted on to mount at least a half-hearted attack on profligate spending. The critics of deficit spending would also explain why constantly spending more than you take in is a bad idea. The short version is that persistent high levels of government debt reduce long-term economic growth. Consider:

In a 2012 paper, economists Carmen Reinhart and Kenneth Rogoff define a "debt overhang" as a situation in which the debt-to-GDP ratio exceeds 90 percent for five or more consecutive years. After looking at 26 debt overhangs in 22 advanced economies since 1800, they conclude that "on average, debt levels above 90 percent are associated with growth that is 1.2 percent lower than in other periods (2.3 percent versus 3.5 percent)." These overhangs last a long time—in their sample, the average lasted 23 years—creating a cumulative loss in economic growth that's "nearly a quarter below that predicted by the trend in lower-debt periods."

That work has been validated by left-wing economists associated with the University of Massachusetts, who were critiquing an earlier version of Rinehart and Rogoff's work that had mistakenly found that debt overhangs reduced growth below zero. The critics conclude that "the average real GDP growth rate for countries carrying a public-debt-to-GDP ratio of over 90 percent is actually 2.2 percent."

We crossed that Rubicon back in 2010, folks. The only difference is that these days, nobody seems to care anymore. You don't have to believe there's something magical about a 90 percent threshold to grok the idea that unpayable government debt has a negative effect on growth. The people who comprise markets recognize that a day of reckoning will eventually come and government will do some combination of raising taxes, reducing services, or inflating currency. None of those outcomes, and especially the unpredictability they promise, is good for economic growth. Which helps explain why the CBO predicts that average annual growth between 2019 and 2029 will be 1.9 percent. That figure compares to 3.2 percent average annual growth between 1950 and 2018.

But weak growth isn't everything, right? Before we enter a decade of sluggish economic activity, let's at least feel good for a few days that Republicans and Democrats can pull together to spend money we don't have on programs that we don't need.