Brian King, deputy director of the Office on Smoking at Health at the U.S. Centers for Disease Control and Prevention (CDC), claims the latest survey data on teen tobacco consumption "indicate that past progress in reducing youth use of these products has been erased." That is true only if you define tobacco-free e-cigarettes as "tobacco products," which the CDC does, and if you ignore the enormous difference between the hazards of smoking and the hazards of vaping, which the CDC also does.

An article about the 2019 National Youth Tobacco Survey (NYTS), published yesterday in the CDC's Morbidity and Mortality Weekly Report, highlights the rising popularity of e-cigarettes among teenagers. The share of high school students who reported using e-cigarettes in the previous month jumped from 11.7 percent in 2017 to 20.8 percent in 2018. It rose again this year, from 20.8 percent to 27.5 percent, although the CDC cautions that the difference may be partly or entirely due to changes in question wording and survey methods. (The NYTS, previously conducted on paper, went electronic this year.) "Direct attribution of this change to actual increases in product use is not possible because changes made to the 2019 survey could also lead to higher estimates of use," the article says. The Food and Drug Administration nevertheless cited that possibly illusory increase in adolescent vaping as a justification for its proposed ban on flavored e-cigarettes.

Despite alarmist warnings about "a whole generation of young people" who supposedly got hooked on nicotine through e-cigarettes, just 9 percent of high school students reported vaping on 20 or more days in the previous month this year, while less than 6 percent reported vaping every day. Furthermore, frequent vaping is concentrated among teenagers who also have smoked. In the 2018 NYTS, just 1 percent of teenagers with no history of tobacco use reported vaping frequently. That fact suggests that teenagers who might otherwise be smoking are vaping instead.

Buried deep in the NYTS report is the fact that "in 2019, the prevalence of cigarette smoking among youths was the lowest ever captured by the NYTS since 1999," the first year the survey was conducted. During that period, the prevalence of past-month cigarette smoking among high school students fell from 28.5 percent to 5.8 percent. That downward trend not only continued but accelerated as vaping took off, which again suggests that e-cigarettes are replacing the conventional, combustible kind. 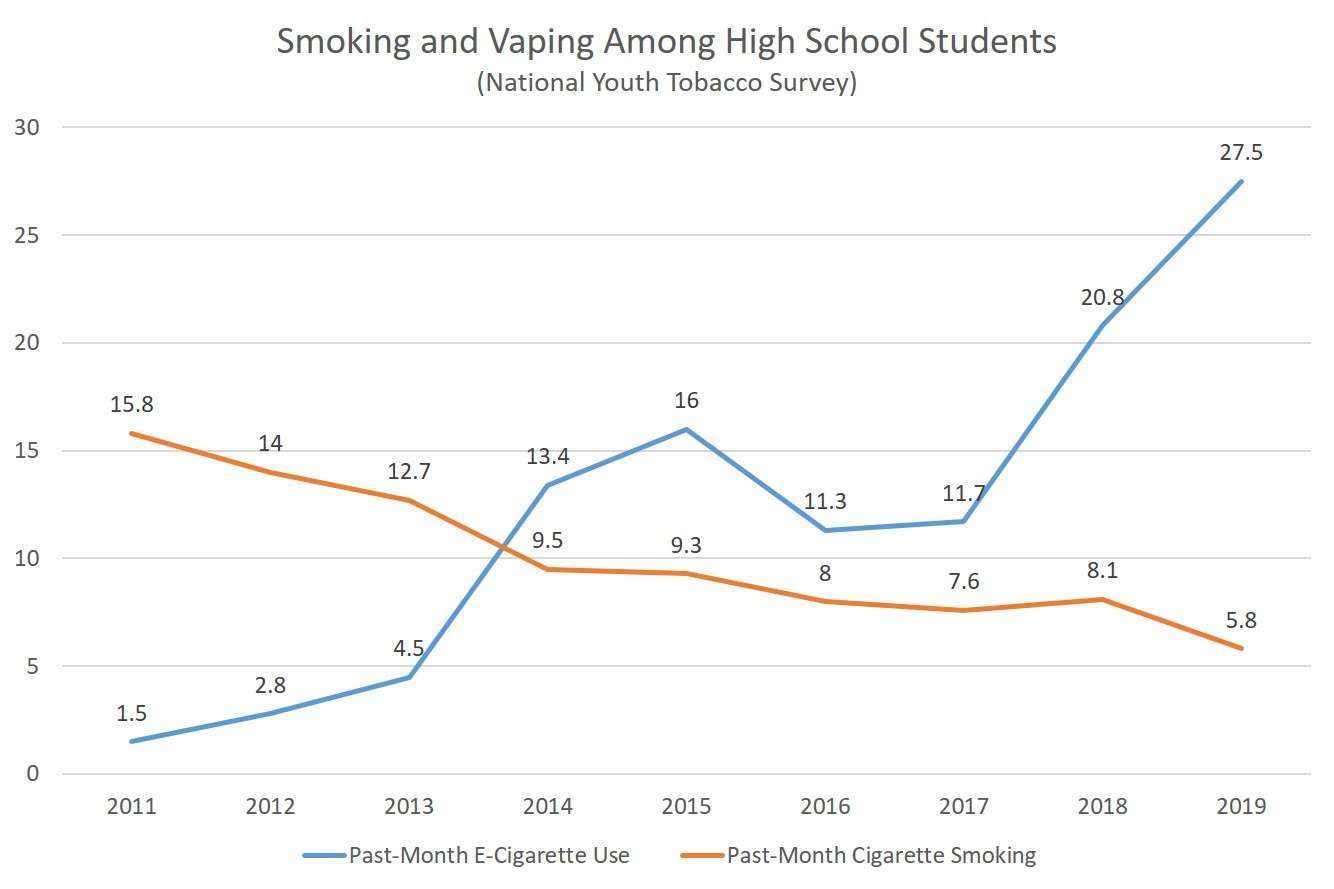 Today high school students are about as likely to vape as they were to smoke in 1999, but they are 80 percent less likely to smoke. Since vaping is something like 95 percent less dangerous than smoking (according to an estimate endorsed by Public Health England), that shift represents a huge improvement in terms of health risks. But according to the CDC, the situation is no better today than it was in 1999! The rise of vaping, the CDC's Brian King says, has "erased" all "past progress." That position makes no sense if the CDC is actually trying to prevent disease, as the agency's name implies.

King also insists that e-cigarettes "have no redeeming aspects among youth." But that is obviously not true for teenagers who would otherwise be smoking.

The CDC worries that "misperceptions about the harm from tobacco product use…remained prevalent in 2019." It is referring to the percentages of teenagers who believe that occasional use of tobacco products causes "little harm." Since that happens to be true, describing this belief as a "misperception" is rather odd. The CDC wants teenagers to say that occasional use of tobacco products causes "a lot of harm" (as most of them did), even though that is not accurate, especially as applied to e-cigarettes.

If anyone is misperceiving (or misportraying) the harm from tobacco product use, it's the CDC, which insists there is no meaningful difference, from a public health perspective, between a society in which 28 percent of high school students smoke and a society in which 28 percent of them vape. That position is scientifically indefensible and inconsistent with the agency's ostensible mission.