This week a federal appeals court revived former Republican vice presidential candidate Sarah Palin's defamation lawsuit against The New York Times, which falsely accused her of complicity in the 2011 Tucson shooting that killed six people and gravely injured then-Rep. Gabrielle Giffords (D–Ariz.). The crucial issue in the case is not the truth or falsity of that thoroughly debunked charge but the mental state of Times Editorial Page Editor James Bennet, who included the canard in a 2017 editorial. Did he make an honest mistake, or did he, because of his animus against Palin and Republicans generally, repeat the smear even though he knew or suspected it was false?

The latter interpretation bolsters Palin's case against the Times, but even the "honest mistake" theory is a mortifying indictment of the paper and the people who run it. If Bennet's editorial is not an example of casual libel masquerading as political commentary, it is at least an object lesson in the cognitive biases that lead smart people astray and feed the mindless partisanship that makes rational debate impossible. 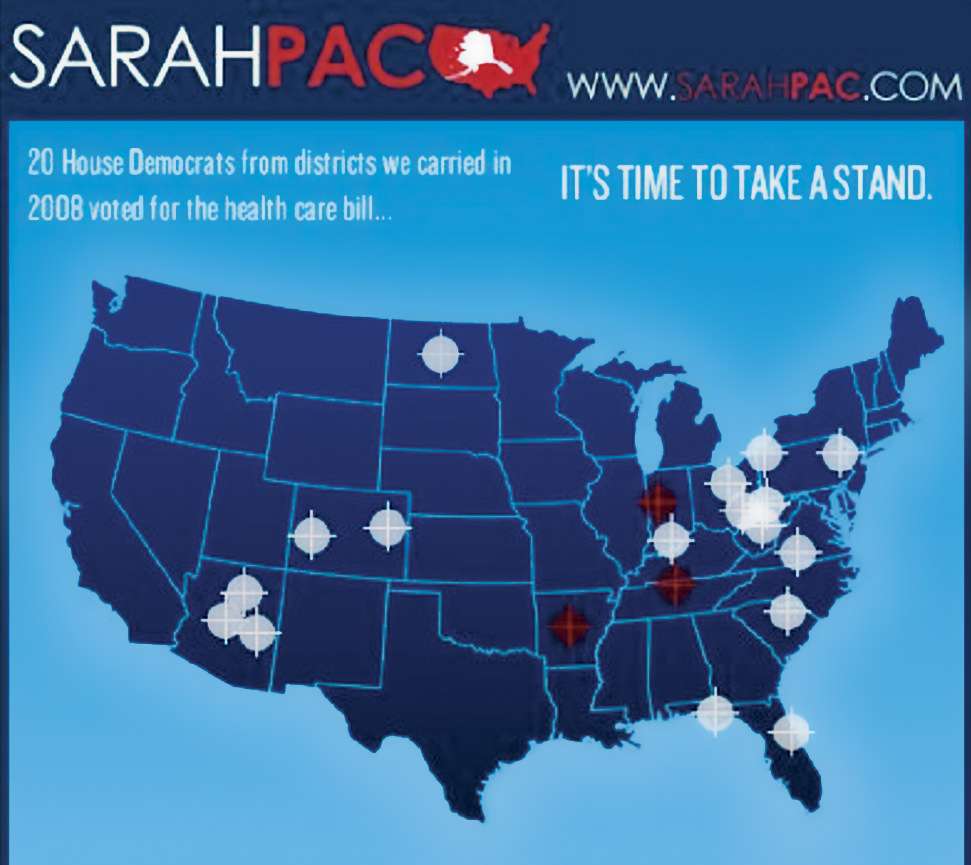 According to the claim that Bennet repeated, a map circulated by Palin's political action committee, SarahPAC, helped incite the Tucson shooter's murderous violence by marking 20 congressional districts, including Giffords', with stylized crosshairs. Yet the map, which was part of the debate over Obamacare, plainly had nothing to do with violence. "20 House Democrats from districts we carried in 2008 voted for the health care bill," the caption said. "IT'S TIME TO TAKE A STAND."

That was obviously a call for opposing the re-election of Obamacare supporters, not for murdering them. And the idea that such run-of-the-mill politicking somehow inspired the Tucson shooter—whose politics leaned left, whose motives were mysterious, and whose behavior and ideas were weird enough to earn him a diagnosis of paranoid schizophrenia—was risible.

Yet in his editorial, written six years after the Tucson attack, Bennet casually revived this long-discredited idea. "In 2011, when Jared Lee Loughner opened fire in a supermarket parking lot, grievously wounding Representative Gabby Giffords and killing six people, including a 9-year-old girl, the link to political incitement was clear," he wrote. "Before the shooting, Sarah Palin's political action committee circulated a map of targeted electoral districts that put Ms. Giffords and 19 other Democrats under stylized cross hairs." Bennet not only said the "link" between the SarahPAC map and the Tucson shooting was "clear"; he falsely claimed the map depicted Giffords and the other legislators.

The next day, the Times ran a correction acknowledging that Bennet had "incorrectly stated that a link existed between political rhetoric and the 2011 shooting of Representative Gabby Giffords," when "in fact, no such link was established." It added that "the editorial also incorrectly described a map distributed by a political action committee before that shooting."

As Palin was quick to point out, Bennet should have known that what he wrote was not true. Before joining the Times, he had served as editor of The Atlantic for a decade, a period when the magazine he oversaw ran several articles debunking the anti-Palin smear. Furthermore, a 2011 ABC News article to which he linked in the editorial explained the problems with his thesis and plainly stated that "no connection has been made between this graphic and the Arizona shooting."

During a 2017 hearing before U.S. District Judge Jed Rakoff, who was overseeing Palin's defamation case, Bennet testified that he did not recall reading any of the articles contradicting his claim in The Atlantic, the Times, or anywhere else. He also said he did not bother to read the articles collected by the writer who composed the first draft of the editorial, including a column that said "Loughner was likely insane, with no coherent ideological agenda" and a Times editorial that said "it is facile and mistaken to attribute this particular madman's act directly to Republicans or Tea Party members."

Taking Bennet at his word, Rakoff dismissed Palin's suit. "What we have here," he wrote, "is an editorial, written and rewritten rapidly in order to voice an opinion on an immediate event of importance, in which are included a few factual inaccuracies somewhat pertaining to Mrs. Palin that are very rapidly corrected. Negligence this may be; but defamation of a public figure it plainly is not."

On Tuesday, a three-judge panel of the U.S. Court of Appeals for the 2nd Circuit unanimously disagreed:

In both the original complaint and the PAC [proposed amended complaint], Palin's overarching theory of actual malice is that Bennet had a "pre‐determined" argument he wanted to make in the editorial. Bennet's fixation on this set goal, the claim goes, led him to publish a statement about Palin that he either knew to be false, or at least was reckless as to whether it was false. The PAC contains allegations that paint a plausible picture of this actual‐malice scenario in three respects: (1) Bennet's background as an editor and political advocate provided sufficient evidence to permit a jury to find that he published the editorial with deliberate or reckless disregard for its truth, (2) the drafting and editorial process also permitted an inference of deliberate or reckless falsification, and (3) the Times' subsequent correction to the editorial did not undermine the plausibility of that inference.

The court concluded that Palin's complaint "plausibly states a claim for defamation and may proceed to full discovery." The Times may yet succeed in arguing that Bennet simply messed up. The paper's quick and embarrassing correction, along with the self-refutation contained in the ABC News article to which Bennet linked, does suggest that he did not deliberately lie, although it is still possible he was reckless enough to meet the "actual malice" standard for proving defamation of a public figure.

The most plausible explanation for this sorry episode is that Bennet vaguely remembered the alleged link between the SarahPAC map and the Tucson shooting, decided it fit the story he was trying to tell about the dangers of extreme political rhetoric, and was thereafter blind to any contrary evidence. His blindness was not necessarily willful, but that does not make it less disturbing.

To the contrary, the likelihood that Bennet sincerely believed Sarah Palin had blood on her hands dramatically illustrates the insidious power of confirmation bias to reinforce an us-versus-them mentality. If you think Republicans are the sort of people who blithely encourage violence through vicious attacks on their political opponents, you will be inclined to accept the notion that Palin is somehow responsible for the attempted assassination of Gabrielle Giffords. And once you've accepted that bizarre theory, facts are unlikely to dislodge it, if you even notice them.

When people think this way, it is hard to take them seriously, even when they are making valid points. Fair-minded readers who know how readily James Bennet accepted a decisively discredited charge against a politician he does not like are apt to be skeptical, for instance, of New York Times editorials blaming Donald Trump for feeding the anti-immigrant bigotry that motivated the man who murdered 22 people in El Paso last weekend. Any cause-and-effect theory connecting the president's ugly rhetoric to that hideous crime is belied by the fact that the shooter's hatred of Hispanics, by his own account, predated Trump's election. But there is a serious argument to be made about the dangerous divisions on which Trump thrives; it's just not one I would trust the Times editorial page to make in a careful and intellectually honest fashion.

That situation is fine, I suppose, if opinion journalists are simply in the business of reinforcing people's prejudices. But if they are actually trying to persuade people, it's a problem.