"Make no mistake," House Majority Leader Steney Hoyer (D–Md.) said Thursday afternoon during a debate over a new budget deal on the House floor, "we're going to have to make some tough decisions in the years ahead to make sure our fiscal house is in order."

But why worry about that today, right? Hoyer's comments pretty effectively sum-up the thinking that governs Congress these days. Lawmakers are well aware of the looming threat posed by the $22 trillion (and growing) national debt, but today they voted to make that problem worse.

Indeed, the difficult decisions that will face future member of Congress only got more difficult on Thursday, as the House voted 284-149 to pass a two-year, $2.7 trillion budget deal that hikes federal spending by about $320 billion annually and is estimated to add about $1.7 trillion to the national debt over the next 10 years. The U.S. was already poised to run trillion-dollar deficits for the foreseeable future, and the new budget deal will make it more difficult to curb those annual deficits in the years ahead.

The budget deal shatters budget caps and actually hikes spending above the baseline that was in place before the 2011 bill that imposed the so-called "sequestration." 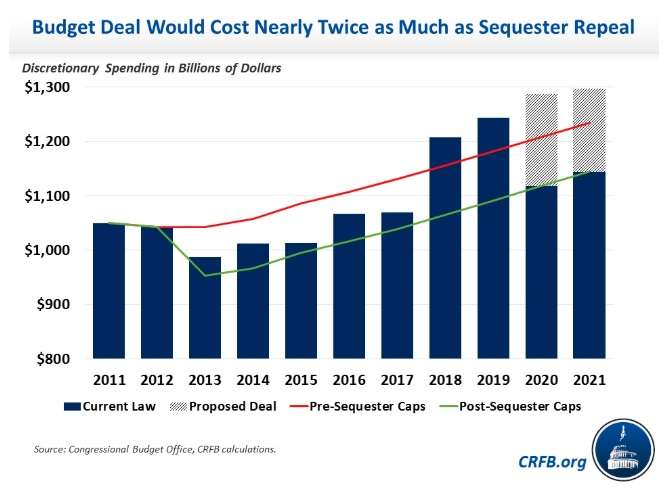 All but 16 House Democrats supported the budget plan, which was hammered out over the past week between Speaker of the House Nancy Pelosi (D–Calif.) and Treasury Secretary Steve Mnuchin.

President Donald Trump, despite promising last year that he would "never sign another bill" that blew up the deficit as the 2018 bipartisan budget deal did, has been nothing but supportive of the new agreement. He met with Republican lawmakers—many of whom were reportedly wavering in their support for more spending—for a lunch on Thursday where he urged affirmative votes.

House Republicans should support the TWO YEAR BUDGET AGREEMENT which greatly helps our Military and our Vets. I am totally with you!

In the end, 65 Republicans in the House supported the deal, while 132 voted against it. Rep. Justin Amash (I–Mich.), a former Republican who is now the lone independent in the House, voted "nay."

A majority of Republicans voting against a budget deal inked by a Republican president might seem like a noteworthy event, but today's GOP lawmakers only vote for fiscal conservatism when it doesn't matter.

When it did matter, they were more than happy to add to the deficit. In 2016, when Trump was elected and Republicans grabbed control of all aspects of the federal government's budget-making authority, the United States was carrying about $19 trillion in debt. Today, in no small part due to the 2018 budget bill the Republican-controlled Congress passed and Trump signed, the national debt has soared past $22 trillion. The Congressional Budget Office estimates that current policies—which doesn't include the hike in spending approved by the House on Thursday—will add another $11 trillion by the end of 2029.

If the budget deal eventually makes it to Trump's desk and gets his signature, the 45th president will have personally added $4.1 trillion to the national debt in a little over two years in office, according to a new analysis from the Committee for a Responsible Federal Budget, which advocates for balanced budgets.

First, it must pass the Senate, which is planning to vote on the bill next week.

One of the final speakers before the House vote was Rep. Steve Womack (R–Ark.), the ranking Republican on the House Budget Committee. He reflected on the fact that lawmakers would soon be leaving Washington for a few weeks of work in district offices—for Womack, that means having some town hall meetings with constituents.

"I already know most people are going to say 'look, you guys have a spending problem up there in Washington,'" Womack said.

Then he voted for the bill too.