After losing at the U.S Supreme Court, the state of Indiana still hasn't given up its argument that there are virtually no Eighth Amendment limits on what it can seize using civil asset forfeiture.

In oral arguments before the Indiana Supreme Court last week, Indiana Solicitor General Thomas Fisher said the state's position that it would be constitutional to seize any and every car that went over the speed limit—a line of argument that elicited laughter from the nation's highest court last year—hasn't budged.

"This is the position that we already staked out in the Supreme Court when I was asked by Justice Breyer whether a Bugatti can be forfeited for going over five miles over the speed limit," Fisher said. "Historically the answer to that question is yes, and we're sticking with that position here."

The Indiana Supreme Court is now reconsidering the case of Tyson Timbs' $42,000 Land Rover, and whether the state's 2015 seizure of Timbs' car after he was convicted of a drug felony violated his Eighth Amendment protections against excessive fines and fees.

In February, the U.S. Supreme Court unanimously reversed the Indiana Supreme Court's ruling that Timbs could not challenge the seizure on Eighth Amendment grounds because the excessive fines clause had not yet been applied, or "incorporated," to the states.

The ruling opened up a new avenue for civil liberties groups to challenge asset forfeiture. It also demonstrated the immense power of the practice, which allows police to seize and forfeit property suspected of being connected to criminal activity. The Indiana Supreme Court will now have to decide how to determine whether a civil forfeiture is excessive or not, a decision that could either check or reinforce the state government's power in these cases.

Lawyers for the Institute for Justice, a libertarian-leaning public interest law firm, argue that the seizure of Timbs' Land Rover, which was not purchased with drug proceeds and was worth four times the maximum fine for the crime Timbs committed, was a grossly disproportional punishment.

After the Indiana Supreme Court ruled against Timbs, the Institute for Justice successfully petitioned the U.S. Supreme Court to review the case.

During oral arguments before the U.S. Supreme Court last year, Fisher argued on behalf of Indiana that the excessive fines clause, even if it applied to the states, did not apply to the practice of civil asset forfeiture, which operates under the legal fiction that it is an action against the property itself, not the owner.

Both the liberal and conservative wings of the Supreme Court have expressed skepticism about civil asset forfeiture in past rulings, and they were not impressed by Indiana's argument.

Justice Stephen Breyer, following Fisher's logic to its natural conclusion, forced Fisher to admit that it would then be constitutional to seize any car going over the speed limit, no matter how slight the infraction or how expensive. 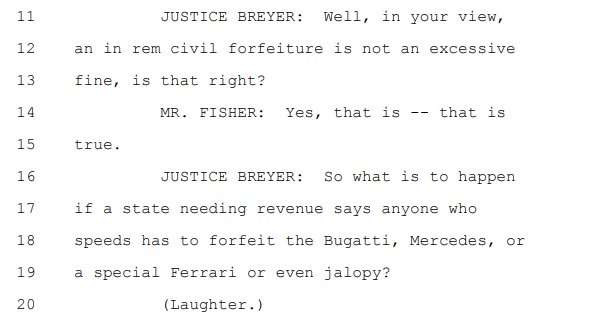 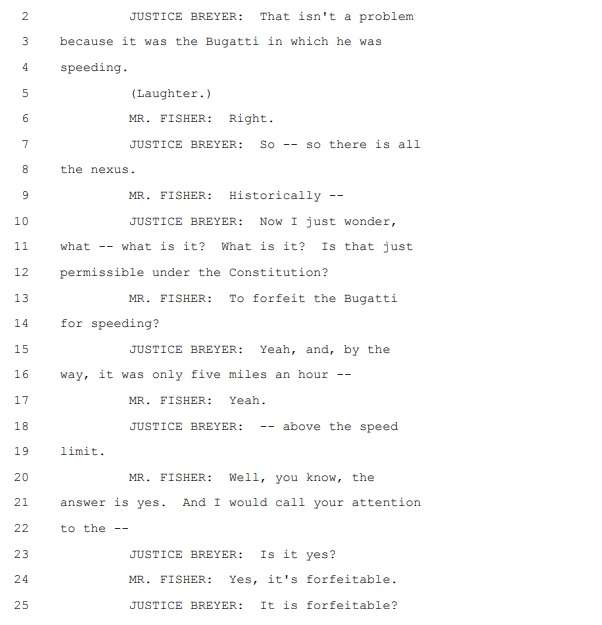 The state of Indiana, although forced to recognize that the Eighth Amendment applies to civil forfeiture, now insists that the test that should apply to determine whether the seizure was excessive is not the proportionality, but rather whether the government can prove a nexus between Timbs' car and the illegal activity—a standard that would put virtually no check on the amount of property police could seize as long there was some connection to a crime.

Indiana Supreme Court Justice Loretta Rush pressed Fisher again on this point: "So where's the limits? If the state decides you're going over x miles per hour so we're going to take your car, is there any limit to that government power?"

"No, look, I've gone out on a limb on the Bugatti, and I don't think I'm going back," Fisher responded.

Institute for Justice lawyer Sam Gedge says in a statement to Reason that Indiana "has resorted to an increasingly dangerous view of governmental power" over the years it has been fighting to keep Timbs' car.

"In the State's view, it can constitutionally forfeit a Bugatti that goes five miles over the speed limit. And the State insists that it can take any property from any person who has ever struggled with drug addiction," Gedge says. "That boundless view of governmental power cannot be squared with the Constitution."

Jesse Walker | From the November 2022 issue