In 2015, a group of researchers published a study in the American Journal of Public Health that was hyped in the press as having proved that instituting new, tougher permitting laws for gun owners in Connecticut cut gun homicide rates by 40 percent.

It was a very questionable study, for reasons summed up below. At the end of an article pointing out the study's problems, I predicted that

to a certain class of consumers of news and commentary, thanks to this study and the press it received, it is already a settled fact that "science has proven that tougher background checks reduce gun homicides by 40 percent."

No doubt raised about the study, either here or elsewhere, will likely dislodge that "knowledge." In which case, the study has achieved its goal whether or not its results are replicable or rigorously proved.

Last night, at the first Democratic candidate debate for the 2020 campaign, Sen. Cory Booker (D–N.J.) proved my prophecy correct when he said, "If you need a license to drive a car, you should need a license to buy and own a firearm. And not everybody in this field agrees with that, but in states like Connecticut that did that, they saw 40 percent drops in gun violence and 15 percent drops in suicides."

Booker is wrong (even if we kindly translate his looser "violence" into the study's actual focus on homicides) and so is the study that gave him that 40 percent figure. The study, as I previously explained, "purports to show that a 1995 tightening in Connecticut's gun permit laws led to a 40 percent reduction in gun homicides over the next decade," resulting in "nearly 300 fewer gun homicides."

The law in question, known as a "permit-to-purchase law," as explained in a press release on the study, "requires all prospective handgun purchasers to apply for a permit in person with the local police regardless of whether the seller of the handgun is a licensed dealer or private seller. It also raised the handgun purchasing age from 18 to 21 years and required prospective purchasers to complete at least eight hours of approved handgun safety training." Here's a site explaining Connecticut's permit process.

Yes, Connecticut's murder rate fell after the law passed, though the state's gun murder rate had already fallen 29 percent in the two years before the law was enacted, matching trends nationwide. Indeed, murder rates have been falling even in those states without any sort of permit-to-purchase laws, as can be seen in this chart from page 19 of the study: 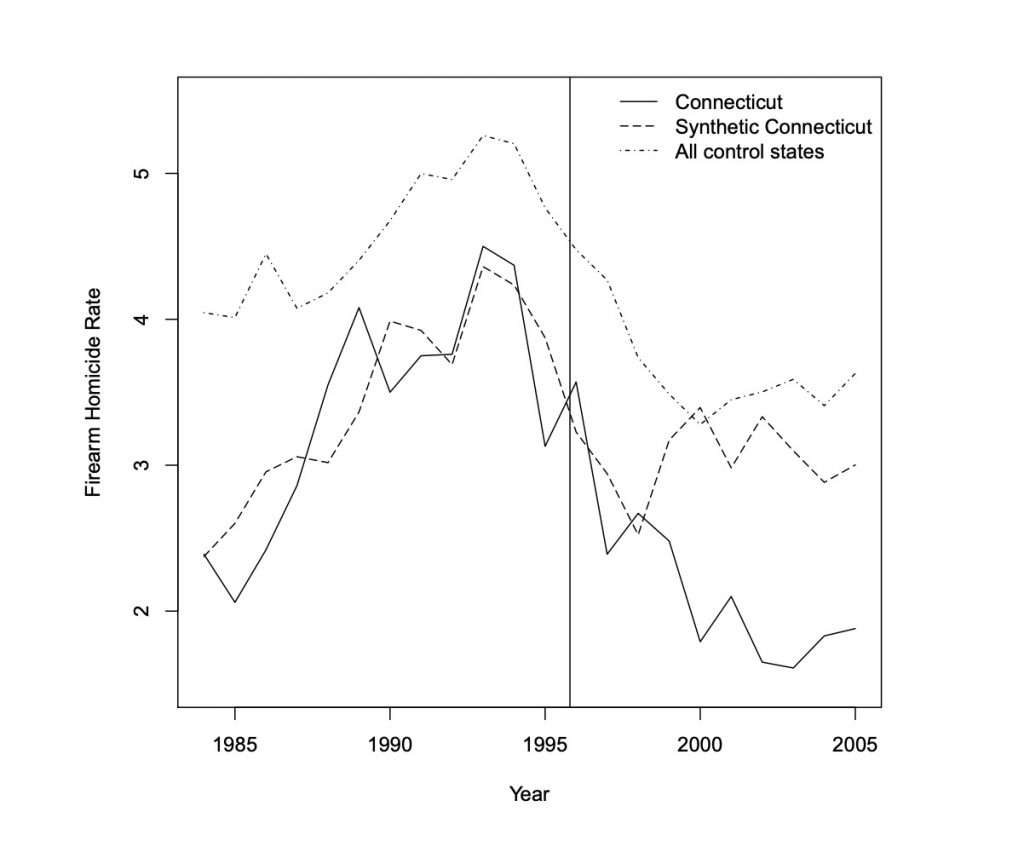 The chart also shows that the study's authors simply guessed about what Connecticut's gun homicide rate would have been if the law had not passed. They did this by creating a "synthetic Connecticut" which is 72 percent neighboring Rhode Island. For reasons the authors do not speculate on, Rhode Island saw an unusual rise in gun homicides in the decade following Connecticut passing its permit law.

The authors lumped the two states together for analytical purposes based solely on the fact that the two states had similar gun homicide rates in the past. But what's really interesting here, and what the study's authors did not examine, is not that Connecticut's rate fell (which was in keeping with national trends anyway), but that Rhode Island's rate started to rise.

The rise in murder rates in synthetic-Connecticut begins in 1997; if you look at Rhode Island, its main component, we see in the raw CDC numbers…that the actual raw number of "extra" murders from that year through 2005 in Rhode Island amount to 52….[Thus] the entire edifice of their result is based on the fact that in Rhode Island over the course of eight years, 52 people made the decision to murder, and the study presumes that because of past patterns, a proportional number of people in Connecticut would also, for some reason, have made the decision to murder over those years minus the laws. You can decide if that seems irrefutably true to you.

There are other big problems with the study. For example, if researchers are going to declare that there was a major effect on homicides because of permit laws, they should know something about how extensively or effectively the laws are being enforced to be sure that it is reasonable to conclude that such laws are having such a powerful effect. Yet this study, like nearly all studies of gun laws, does not even attempt to do that.

Another big problem with the study is that it arbitrarily cut off its data analysis at 10 years for no reason connected to the data available or to the effect that was being studied. As I pointed out at the time of the study's release:

Six of the eight years since 2005 for which CDC had data show Connecticut with a higher real gun homicide rate than 2005, the year that the authors chose to stop. If they had gone out to 2006, the reduction in rates in real Connecticut from 1995 to 2006 is cut to 12 percent.

In other words, the oft-quoted 40 percent figure only came about because the study's authors arbitrarily focused on this 10 year stretch. Had the authors studied an extra couple of years past 2005, their results would be less impressive to gun control advocates and thus less headline-grabbing.

Regrettably, Cory Booker's repetition of a highly dubious figure from a highly dubious study will strike many viewers as true. The fact that the media's ostensible "fact checkers" seem unaware of the problem doesn't help either.