Twenty-two years after the launch of their original series, the Men in Black are back. But why? Well, yes, the Earth is still home to a plenteous undercover population of intergalactic space aliens, and they still need herding. And some of them still pose existential threats to the planet, and so require sterner attention. But as we see in this fourth MiB film, the franchise faces an existential threat of its own: irrelevance.

There have of course been insurmountable losses since the first Men in Black. Will Smith and Tommy Lee Jones, the Agent J and Agent K who powered the original film with their comedic chemistry, are gone and pretty surely not coming back. Also missing is Chief Zed, the agency boss played in the first two films by the wonderfully acerbic Rip Torn, who was replaced in the third picture by Emma Thompson's milder-mannered Agent O (who returns here, overseeing Liam Neeson's "High T," head of the agency's London branch).

Taking the approximate place of Smith and Jones are Chris Hemsworth as Agent H and Tessa Thompson as new recruit Agent M. Hemsworth's character is a showboating veteran resting on his laurels in the London office and Thompson's is a woman who had a childhood encounter with the Men in Black, evaded their mind-wiping neuralyzers, and is now H's new partner. This should have been a great team—Hemsworth and Thompson's own chemistry was clearly displayed in Thor: Ragnarok. But here they strike not a single spark—a fun-deficit that has to be laid at least in part at the feet of director F. Gary Gray (The Fate of the Furious). Gray also manages to goose the story around from Paris to Marrakech to an island off of Naples without persuading us that he's shooting anywhere other than a studio soundstage.

The story is a low-energy mishmash. Yet another doomsday dingus is in play, and it's being avidly sought by an evil interplanetary outfit called The Hive, which appears to be personified by Laurent and Larry Bourgeois, a pair of famous French hip-hop dancers. (This is a little weird, but whatever.) There's also a guy with an alien beard (it unfurls and speaks) and a three-armed weapons dealer in a semi-Sia wig (Rebecca Ferguson) who triggers an elaborate fight scene that's not bad. To make things almost interesting, there's a mole inside the MiB.

Naturally, there are callbacks from the fondly remembered first Men in Black film. The gibbering worm aliens slink around MiB headquarters once more, and Frank the Pug (the dog-world Don Rickles) gets a passing line, too. There's the usual complement of big shiny weapons (is that a Series 7 De-atomizer?) and a new chart of secretly alien celebrities (with Elon Musk and Arianne Grande replacing the old-school Danny DeVito and Sylvester Stallone). And of course those nifty neuralyzers are still being whipped out to cloud the minds of inconvenient witnesses.

But with its unfortunate combination of rote plotting and retread visual elements, the movie never attains comic liftoff. And if it weren't for Kumail Nanjiani, who gives the film's most entertaining performance, there'd be few real laughs. Nanjiani voices the last surviving member of a tribe of alien chess pieces, a tiny character saddled with the clunky moniker Pawny. Having lost his queen in a calamitous battle, Pawny yearns to find a new sovereign. "Are you a queen?" he asks Thompson's Agent M. "Well," she says, "to the extent all women are." (Among Thompson's duties in this movie is some light grumping about the sexism of the franchise's title—Men in Black. Happily, Hemsworth gets to play this trite messaging—crafted by two male screenwriters—for a small laugh at another point.)

So what next for the Men in Black? Laurie MacDonald and Walter F. Parkes, who've produced these movies from the start, might be hoping for yet another sequel. Viewers of this film, however, may be more than ready to move on. 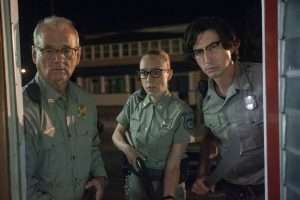 Nothing in Jim Jarmusch's new zombie-com is as undead as the movie itself. This is a sad thing to have to say about a film that stars Bill Murray, Adam Driver, and Tilda Swinton. Especially since Jarmusch's previous genre exercise, the 2013 Only Lovers Left Alive, was such a wildly original piece of work. But The Dead Don't Die is listless and dull; it'd be more fun if it were dumber, and even a little bit witty—which, believe me, it isn't.

The movie is set in a nowhere burg called Centerville ("A Real Nice Place," says a sign at the town limits), which is filled with barely sketched-in characters doing boring things that never tie together into an actual story. Farmer Miller (Steve Buscemi in a MAGA-style "Make America White Again" cap) is missing a chicken. Police chief Cliff Robertson (Murray) suspects the thief is forest-dwelling Hermit Bob (Tom Waits, in a role that could be excised from the movie with no disruptive effect at all). Cliff and his deputy, Ronnie Peterson (Driver), notice that their watches have stopped working and there's no more cell-phone service and daylight seems to be lasting much longer than it should. Soon fellow cop Mindy Morrison (Chloë Sevigny) is sharing their concern.

Meanwhile, three kids at the local juvie lockup learn from TV newscaster Posie Juarez (Rosie Perez) that the earth has been knocked off its axis by "polar fracking." Presumably for this reason, the dead in the municipal cemetery have begun rising from their graves. Two of these creatures (Jarmusch vet Iggy Pop and the director's partner Sara Driver) make their way to the town diner, where they chow down on two employees and then avail themselves of coffee, the beverage they so loved in life. (The movie is well-stocked with film-culture references, and this notion of zombie consumerism echoes George Romero's 1978 Dawn of the Dead—although here we have zombies wandering the streets in search of wi-fi and Chardonnay. Which is admittedly pretty funny.)

What else? Well, everybody is weirdly wild about the movie's title song, a country fiddle ballad by Sturgill Simpson that keeps turning up on random CDs and car radios. We see gas station owner and comic-book connoisseur Bobby Wiggins (Caleb Landry Jones) trading zonked dialogue with deliveryman RZA and acting as oddly as you might expect from a character played by Caleb Landry Jones. Over at the Moonlight Motel, three youths (Selena Gomez, Austin Butler and Luka Sabbat) are fearfully bracing for the zombie apocalypse. And out on the road, Deputy Ronnie is getting all meta with Chief Cliff. (Asked how he knows this story won't turn out well, as he keeps predicting, Ronnie says, "Jim showed me the script.")

Then there's the incomparable Tilda Swinton, who plays Zelda Winston, Centerville's samurai undertaker (let's leave it at that). Swinton is never boring, and she's not boring here, either. But while I've always thought she could redeem even the lumpiest, unworthiest movie…after seeing this one, I'm not so sure.

International Travel Is Partially Back, but It's Worse Than Before