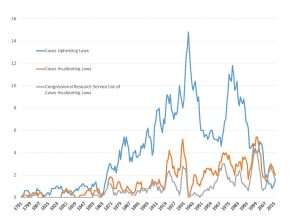 As I recently noted, the U.S. Supreme Court itself does not keep track of how often it has struck down a provision of a federal statute as unconstitutional. Congress eventually decided that an inventory was needed, but there is good reason to think we have underestimated how often the Court has enforced constitutional limits on Congress. My new book, Repugnant Laws, and the related Judicial Review of Congress Database are concerned with correcting that record.

But not even Congress has tried to keep up with how often the Court has upheld a federal statutory provision against constitutional challenge. Unsurprisingly, Congress has been more interested in when the Court has gotten in its way than in when the Court has gotten out of its way. The Judicial Review of Congress Database addresses this issue as well, offering an inventory of all the cases in which the Court has substantively reviewed the constitutional validity of an application of federal law and upheld it against challenge. The figure above is derived from that database. The blue line represents the number of cases over time that have upheld a statute. It overshadows the orange line, the (corrected) count of cases striking down a law. Most laws have not been so repugnant after all.

The simple fact is that throughout its history the Court has mostly used the power of judicial review to validate congressional actions and to explain why there are no constitutional problems with the ways in which the legislature is exerting power. When a constitutional challenge has reached the Court, the justices have been far more likely to uphold a federal law than strike it down. When Congress passes innovative legislative measures that press the limits of its constitutional powers, the Court is far more likely to approve of such congressional exertions than tell Congress it has gone too far. The Court has mostly acted as a handmaiden to congressional power.

The anti-Federalist writer Brutus would not have been surprised. He warned us that the Court would, on the whole, enhance rather than limit congressional power. "[T]he judicial power of the United States, will lean strongly in favor of the general government," he predicted, and Congress would soon take its guidance on the proper scope of its power not from the Constitution itself but from what the Court has said about the Constitution and what the judges are willing to uphold and apply. As it happens, the Court is willing to uphold and apply quite a lot.

Politically, this is to be expected. The courts are able to sustain a power of judicial review because tolerating such a power is not too burdensome to other government officials. So long as the courts are mostly upholding what Congress does, Congress can abide the relatively rare occasions when the courts make a bit of trouble by striking something down.

Moreover, the justices do not magically appear on the Court. They are placed there by the same elected politicians who make the laws that the justices will be reviewing. Politicians do not make a habit of putting on the bench judges who will have deep disagreements with the constitutional vision and policy agenda of those same politicians.

Judge Richard Posner once latched onto a meme from the Iran-Contra imbroglio to ask "What am I? A potted plant?" Unlike some conservative jurists like Robert Bork, Posner favored "judicial engagement" and thought the broadly worded language of the Constitution would require active judicial interpretation to make it meaningful. Across its history, the Court has probably been inclined to agree. The justices are not potted plants, but when they set to work tinkering with the terms of the Constitution they often find that the constitutional project is best fulfilled if Congress is given ample room to roam.

COVID-19 Pulls Back the Mask on America's Prison System

C.J. Ciaramella | From the August/September 2020 issue

I Don't Want To Be Anybody's Employee

Kim Kavin | From the August/September 2020 issue

Can Trump Really Lose the Election and Remain President?