Instead, he ended up highlighting a crucial blind spot in his, and the president's, understanding of the issue—an error that shows exactly why Congress should not trust him, or Trump, with greater powers to reshape global trade.

Most of the op-ed is premised on the idea that lowering tariffs all around the world would be beneficial to the United States' economy. And that's probably true. Trade isn't a zero-sum game, so more trade and fewer tariffs would generally benefit everyone. This isn't a novel idea—it's basically been the consensus among the nations of the developed world for decades, and it's been pretty phenomenally successful—but it is good to hear the Trump administration admitting as much. While Trump has at times talked about trying to get to a point where there are no tariffs at all, his actions (and his general "trade is bad" worldview) make it difficult to take that seriously.

But Navarro is playing a bait-and-switch here. To get to that world of lower tariffs, he says, Congress should give Trump more power to increase tariffs. As a negotiating tactic only, of course. Specifically, Navarro is calling for the so-called Reciprocal Trade Act, which Trump asked Congress to pass at the State of the Union address earlier this year. As I wrote at that time, this bill would effectively give the president more excuses to raise trade barriers and impose tariffs, which are really just taxes paid by American importers.

For example, the European Union currently charges 10 percent tariffs on cars imported from America while America charges only 2.5 percent on car imports from Europe. If the Reciprocal Trade Act were to become law, Trump could circumvent Congress and raise car tariffs to 10 percent—something that he's already threatened to do via a different mechanism, and something that would be disastrous for America's auto dealers and car buyers.

Should Congress trust Trump with those powers? Maybe you believe Navarro's claim that Trump would only use it to negotiate for lower tariff rates for American exports. But even then you should ask—as with all delegations of authority from Congress to the executive—whether you'd want the next president to have that same unchecked power.

You should also examine the argument Navarro makes at the end of the op-ed, where he suddenly shifts into protectionist mode—and ends up undermining his own argument for expanding presidential trade powers by demonstrating how little the current administration understands about trade.

Here's what Navarro writes (bolding mine, italics his):

For a ballpark estimate of the jobs impact from lowering the U.S. trade deficit through a reciprocal tariff policy, the Economic Policy Institute provides this yardstick: For every $1 billion deficit reduction, U.S. employment increases by approximately 6,000. This suggests a [Reciprocal Trade Act] jobs boost ranging between 350,000 and 380,000.

There are two fallacies at play here.

First: Navarro is only half-right when he says that imports don't contribute to gross domestic product, and he's fully wrong to imply that imports harm growth. (In fact, they don't influence the calculation of GDP at all, but they do have a positive correlation with economic growth.) Second: Running a trade deficit or a trade surplus has virtually no bearing on how quickly a country's economy grows. Navarro uses these two errors to build a backdoor case for restrictions on imports that is not grounded in either economic theory or empirical evidence.

Let's start with the first mistake: that imports do not affect GDP, either positively nor negatively. Here's how economists Tyler Cowen and Alex Tabarrok explain this exact error in their book Modern Principles of Economics:

Here is a mistake to avoid. The national spending approach to calculating GDP requires a step where we subtract imports but that doesn't mean that imports are bad for GDP! Let's consider a simple economy where [Investment], [Government spending], and [Exports] are all zero and [Consumption]=$100 billion. Our only imports come from a container ship that once a year delivers $10 billion worth of iPhones. Thus when we calculate GDP we add up national spending and subtract $10 billion for the imports, $100-$10=$90 billion. But suppose that this year the container ship sinks before it reaches New York. So this year when we calculate GDP there are no imports to subtract. But GDP doesn't change! Why not? Remember that part of the $100 billion of national spending was $10 billion spent on iPhones. So this year when we calculate GDP we will calculate $90 billion-$0=$90 billion. GDP doesn't change and that shouldn't be surprising since GDP is about domestic production and the sinking of the container ship doesn't change domestic production.

But not only do imports (or the lack of them because all the container ships sank) not harm GDP, they likely add to it. Cowen and Tabarrok continue:

If we want to understand the role of imports (and exports) on GDP and national welfare. We have to go beyond accounting to think about economics. If we permanently stopped all the container ships from delivering iPhones, for example, then domestic producers would start producing more cellphones and that would add to GDP but producing more cellphones would require producing less of other goods. If we were buying cellphones from abroad because producing them abroad requires fewer resources then GDP would actually fall—this is the standard argument for trade that you learned in your microeconomics class.

This is all a bit technical, to be sure, but it applies to the real world. Last week, I spoke with Alex Camara, the CEO of AudioControl, a Seattle-based manufacturer of speakers and headphones. Although all his company's products are designed and built in the United States, about 30 percent of the component parts are imported from China—and are now subject to 25 percent tariffs. Navarro wants you to believe that those imports are a drag on GDP, but a business like Camara's might not even exist without them.

"Domestic production would not be as strong as it is without access to global supply chains, which reduce costs, raise productivity, expand the global market share of U.S. firms, and allow the United States to focus on what it does best: innovating, researching, and designing the cutting edge goods and services of the future," write Theodore Moran and Lindsay Oldenski, researchers at the Peterson Institute for International Economics. "The data show that when US firms expand abroad they end up hiring more workers in the United States relative to other firms, not fewer."

The second mistake is the more important one, but it builds on the first. Navarro is trying to argue that reducing imports will cut the trade deficit and boost economic growth.

As the Harvard economist N. Gregory Mankiw explained in The New York Times last year, countries run trade deficits because their governments and people spend more on consumption and investment than on the goods and services they produce. The way to reduce a trade deficit is to reduce public and private spending—which is why America's trade deficit has typically fallen during recessions, when spending drops—not by attacking the countries that are trading with you.

"To be sure, I would be happy to have balanced trade," Mankiw writes. "I would be delighted if every time my family went out to dinner, the restaurateur bought one of my books. But it would be harebrained for me to expect that or to boycott restaurants that had no interest in adding to their collection of economics textbooks."

The idea that trade deficits are tied to economic growth also fails in practice.

In 2017, for example, the United States recorded GDP growth of 2.22 percent and ran a trade deficit of about $502 billion—"with a b," as Trump would say. But look at other countries that had similar growth rates. France grew at 2.16 percent but had a trade deficit of $18 billion. Germany grew at 2.16 percent too, but ran a trade surplus of $274 billion.

As Benn Steil so perfectly illustrated it in Business Insider last year: 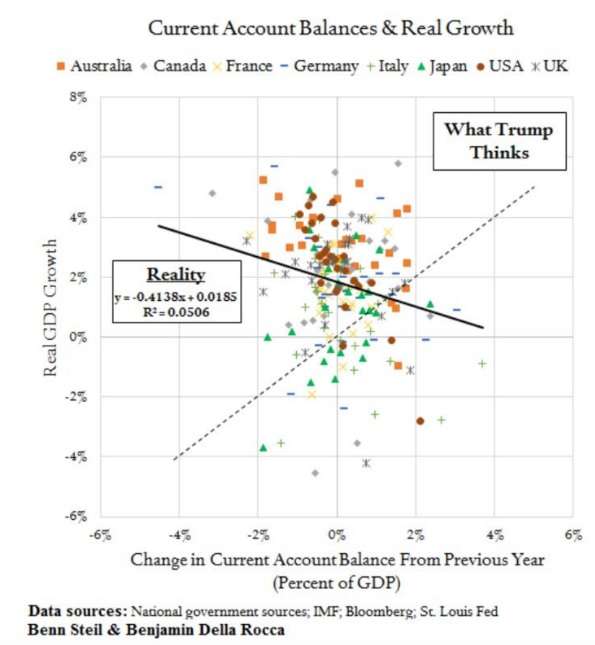 If Navarro were truly interested in building a world with freer trade and lower tariffs, his influence on "Tariff Man" Trump would be welcomed. But his Wall Street Journal argument looks more like a deliberately deceptive attempt to push for greater executive powers over trade, which could be wielded to limit imports into America under the false premise that doing so will boost economic growth.