China is shooting blanks with its threat of a rare earth minerals embargo, the most recent salvo in an ongoing trade war with the United States.

Agence France-Presse reports that, according to various state propaganda sites, the Chinese government may counter President Trump's tariffs by cutting off America's access to exports of rare earth minerals that are used in all sorts of advanced electronics. Rare earth metals are chemically similar and include cerium, neodymium, europium, and samarium. Despite their name, most rare earth metals are similarly abundant as more familiar elements like copper, nickel, and zinc.

"Waging a trade war against China, the United States risks losing the supply of materials that are vital to sustaining its technological strength," the official Xinhua news agency said in a commentary. The state-owned Global Times further warned, "It is believed that if the U.S. increasingly suppresses the development of China, sooner or later, China will use rare earths as a weapon."

While the U.S. Geological Survey reports that China produced 70 percent of rare earth minerals in 2018, there are rare earth minerals elsewhere in the world. What's more, the Chinese government has played this game before, imposing export restrictions on rare earth minerals back in 2010. At the time, I predicted that "new supplies and innovation will ensure that the future of the world's high tech economy will not depend upon the whims of the mercantilist mandarins who steer Chinese industrial and trade policy." By 2016, my prediction had come true.

As a result, the price for the VanEck rare earths ETF, for example, has dropped by more than 85 percent since the fund's inception in 2010. 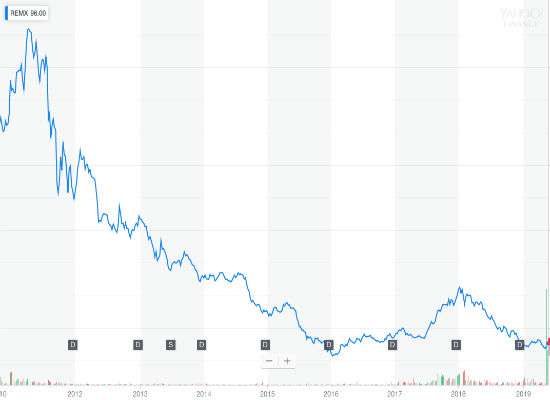 Also, keep in the mind that the U.S. Geological Survey estimates the value of rare earth compounds and metals imported by the United States in 2018 was just $160 million. Chinese export restrictions on rare earth compounds could cause some short term economic pain, but it would be soon alleviated as miners and innovators turned to exploit the nearly two-thirds of the world's reserves that lay outside of the Middle Kingdom. Those global reserves, by the way, would last more than 700 years at current rates of extraction.