Last evening, I attended a rain-soaked rally in New York City for long-shot Democratic presidential candidate Andrew Yang, a 44-year-old entrepreneur who is running on a platform based on three main ideas: a universal-basic income (UBI), Medicare for All, and what he calls "human-centered capitalism." He's funny, smart, and forward-looking. Although he has effectively zero chance of becoming president (then again, who thought Donald Trump would ever win?) and his vision is built upon flawed premises (more on that in a moment), the conversation he's trying to start is worth taking seriously, if only because his fear of a jobless future resonates with many people.

Although Yang's campaign said that over 5,000 people RSVPed to the rally, held at Washington Square near New York University, there were maybe a few hundred people in attendance. The rain, heavy at times, doubtless depressed turnout, but the mood was ebullient, with followers holding up signs that said everything from "Math" (a nod to the idea that the candidate's numbers on his policies check out) to "Foreskin for the Win" (the Taiwanese-American Yang told The Daily Beast that he's skeptical of routine circumcision of male babies).

Over about 20 minutes of comments, the candidate hammered home his main themes. "How did Donald Trump become our president in 2016?" Yang asked at one point. "The explanations go something like Russia, Facebook, the FBI, maybe a dash of Hillary Clinton thrown in there. But I looked at the numbers…and Donald Trump is our president for one simple reason: We automated away 4 million manufacturing jobs in Michigan, Ohio, Pennsylvania, Wisconsin, Missouri, Iowa, all of the swing states that Donald Trump needed to win." 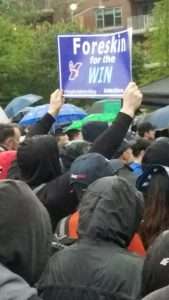 Anxiety over an increasingly jobless future is the motivating concern of Yang's campaign. He thinks his version of a UBI, which would give every American between the ages of 18 and 64 $1,000 a month in cash, will provide people enough of a cushion to alleviate the stress and anxiety of economic dislocation without undercutting the desire to work and be productive. Indeed, he says that having basic needs met through a UBI and tax-provided health insurance (Medicare for All) will actually spur people to be more creative and entrepreneurial without reducing their zeal for employment. The jury is out on all of this, especially since the one existing program he keeps pointing to is Alaska's Permanent Fund, which gave residents there just $1,600 for the entire year of 2018. Alaska simultaneously boasts the second-highest labor force participation rate and the nation's highest unemployment rate, so go figure. Given the lack of truly relevant, long-term experiments, it's far from clear what the outcome of a UBI might be.

That said, it will be costly—around $3 trillion a year (the current federal budget is $4.4 trillion). Medicare for All is also expensive—around $32 trillion over 10 years—and it's not immediately clear how Yang would pay for all this. His campaign website talks about eliminating some federal spending, instituting a value-added tax (VAT) of 10 percent that would squeeze big tech companies more. He also says that his UBI would "permanently grow the economy by 12.56 to 13.10 percent," which seems precisely like the sort of exact-sounding rosy scenario that doesn't pass the smell test. Whether Yang's budget math adds up it's at least slightly heartening that, unlike, say, Bernie Sanders, he at least makes a gesture toward paying for his governing vision (Sanders resolutely refuses to explain in any detail how he's going to pay for his version of Medicare for All).

Let's leave aside for the moment the question of paying for Yang's plans. Is he right that the biggest problem facing America is a jobless future, one in which automation, artificial intelligence, and machine learning consign more and more of us to the reserve army of the unemployed?

Yang talks a lot about the coming revolution in self-driving trucks, call-center bots, and the like to paint a future in which fewer and fewer people between 16 years old and 65 years old have meaningful work to do. What has already happened to manufacturing jobs is about to happen to the retail sector and the few remaining blue-collar professions, such as trucking. According to the Bureau of Labor Statistics (BLS), the labor force participation rate since 1950 peaked in 2000-2001 at around 67 percent. In 1950, it was around 60 percent and so far in 2019, it's about 63 percent:

A slightly different story appears when you break the rate down via gender. Male labor force participation rate peaked in the early 1950s at around 86 percent and has been steadily declining ever since, to around 70 percent (the decline has flattened somewhat in the past few years, though it's hard to know if that's a new normal or a temporary cessation).

Meanwhile, female labor force participation rate grew steadily from about 33 percent in the early 1950s to a current level of about 57 percent (down slightly from a peak a decade or so ago of 59 percent).

Encouragingly, job tenure—the length of time an employee stays with the same firm—has been constant over the past decade. The BLS found that between 2008 and 2018, the median tenure of workers with the current employer has stayed stable at a little over four years (that's also about what median tenure was in 1983). Over the same period, the percentage of workers with 10 years or more with their current employer actually increased, from 31.5 percent to 33.2 percent. This shouldn't be happening if the labor market is being emptied out or massively disrupted due to automation.

Yang's animating concern is ultimately misguided in two profound ways. One concerns the pace of change. At least since the beginning of the Industrial Revolution, critics have always worried that technological revolutions will wipe out whole industries overnight, causing a huge amount of human suffering and social dislocation. But that is essentially never the case. Consider manufacturing jobs. The share of factory workers as a percentage of the labor force peaked in 1943, at around 40 percent. Since then, it's been a steady decline for decades. When it comes to contemporary fears about things such as autonomous vehicles and trucks, self-interested hucksters such as Elon Musk can easily gull reporters and others with predictions that we're just a couple of years away from never having to touch a steering wheel again. But as Reason Foundation's transportation guru, Robert W. Poole will tell you, we are in fact multiple decades away from such technological marvels becoming commonplace. Even disruptive economic change unfolds at a pace to which we can generally adapt.

The second issue with Yang's grim vision of the future is more conceptual. Predictions of jobless futures have a long history and a perfectly failed record at being correct. At least since Queen Elizabeth I of England refused in 1589 to issue a patent for a type of knitting machine, people have always worried that technology will destroy the need for human workers. However, as Reason's Ronald Bailey documented in a 2017 article, MIT economist Daron Acemoglu and Boston University economist Pascual Restrepo

report that the number of jobs lost due to robots since 1990 is somewhere between 360,000 and 670,000. By contrast, last year some 62.5 million Americans were hired in new jobs, while 60.1 million either quit or were laid off from old ones, according the Bureau of Labor Statistics. The impact of robots, in other words, is quite small, relatively speaking. Moreover, when the researchers include a measure of the change in computer usage at work, they found a positive effect, suggesting that computers tend to increase the demand for labor.

Another Boston University economist cited by Bailey, James Bessen, notes that even jobs heavily impacted by the spread of computers and automation—think supermarket checkouts, paralegal work, and bank tellers—are employing more people than they did before the rise of labor-saving machines. The number of bank tellers increased along with the number of ATMs because ATMs "allowed banks to operate branch offices at lower cost; this prompted them to open many more branches, offsetting the erstwhile loss in teller jobs."

As economic historian and Reason columnist Deirdre McCloskey has written:

Consider the historical record: If the nightmare of technological unemployment were true, it would already have happened, repeatedly and massively. In 1800, four out of five Americans worked on farms. Now one in 50 do, but the advent of mechanical harvesting and hybrid corn did not disemploy the other 78 percent.

In 1910, one out of 20 of the American workforce was on the railways. In the late 1940s, 350,000 manual telephone operators worked for AT&T alone. In the 1950s, elevator operators by the hundreds of thousands lost their jobs to passengers pushing buttons. Typists have vanished from offices. But if blacksmiths unemployed by cars or TV repairmen unemployed by printed circuits never got another job, unemployment would not be 5 percent, or 10 percent in a bad year. It would be 50 percent and climbing.

It's conceivable that the future will be different than the past when it comes to automation and its effect on work. But it's also highly unlikely and suggests that Andrew Yang's policy platform is built on a foundation of fear that is thankfully mistaken.

Katherine Mangu-Ward | From the March 2023 issue

Scott Shackford | From the March 2023 issue