More than 70 percent of Americans think pharmaceutical companies should cover the costs associated with opioid addiction and overdoses, according to a new NPR/Ipsos poll. And 57 percent say these companies should be forced to pay in some unspecified and undirected way as punishment.

The poll was conducted April 12-17 with a nationally representative sample of 1,510 respondents.

With one in three respondents saying they know someone who suffers from an addiction or has overdosed on opioids, it's no wonder that people are angry, exasperated, and bewildered about how best to help. Nonetheless, the poll results are disappointing.

Specific unscrupulous promotion and prescribing behavior can be addressed without blaming all drug companies that make opioid-based drugs—a broad category of medications that are crucial for many legitimate medical reasons and used responsibly by many patients and physicians.

And big pharmaceutical settlements with state governments or the feds won't actually get back to ordinary people—or at least not in the helpful ways hoped. Time and again, settlements of this sort go to unspecified state expenses or, worse, back to law enforcement agencies for more of the same old attempts to arrest our way out of social problems. Individuals and communities struggling with opioid issues would be much better served by donations to local programs and resources.

For a while now, the "opioid crisis" has actually been a fentanyl crisis, especially in terms of what's causing overdoses and deaths. Nonetheless, a lot of people—including 71 percent of those surveyed by NPR—think the government should do more to restrict access to prescription opioids. You know, the one sure way to send more people to dangerous black-market drugs.

Meanwhile, the government is fighting a two-pronged but all-carceral battle against opioids, seeking to prosecute pharmaceutical companies for creating addicts that other arms of law enforcement will arrest and prosecute.

It's the drug war that's not working. It's the lack of options for safe drug use and detox that aren't working. Lining law enforcement budgets with drug company cash won't change that.

Joe Biden is in. Read Reason's Christian Britschi for more information. I am preoccupied with the seemingly random (dare I say Trump-like?) punctuation in his announcement: 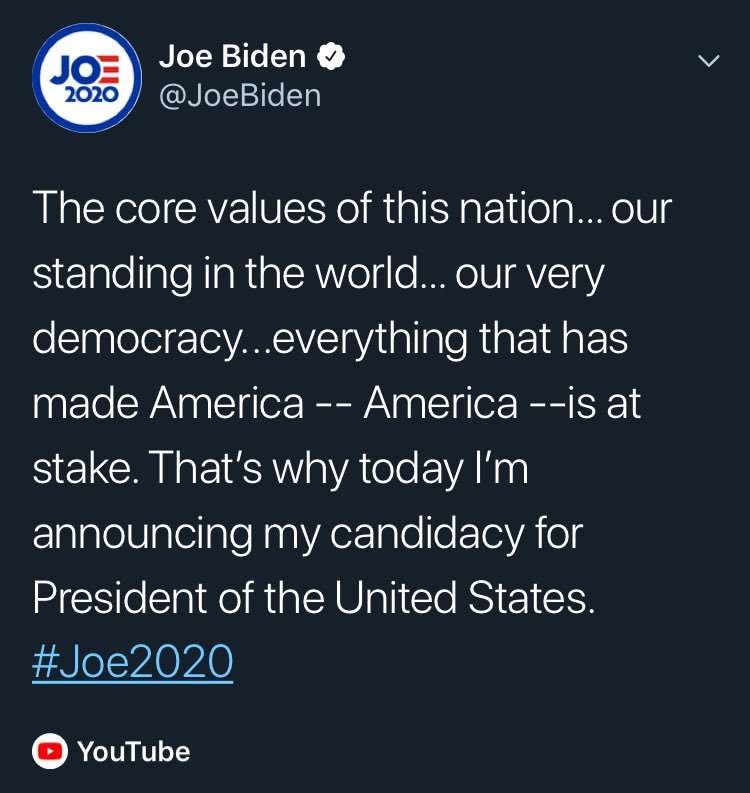 Our core grammar…. the things that make us — readers — capable of following a sentence… is at stake. https://t.co/ppk7RsJe3X

In conclusion: how can you trust a man to run the free world if he can't put the same number of spaces on either side of his dashes? #Joe2020

For his part, President Donald Trump has welcomed the man he calls "Sleepy Joe" to the presidential race. "I only hope you have the intelligence, long in doubt, to wage a successful primary campaign," Trump tweeted Thursday morning. "It will be nasty—you will be dealing with people who truly have some very sick & demented ideas. But if you make it, I will see you at the Starting Gate!"

Biden takes a lot of flak for being a boring choice, but "right now most Dem voters, especially black voters, see him as the reliable brand who can win," suggests Dave Weigel on Twitter. "So does the guy who'd be America's oldest president get to Iowa without voters second-guessing that?"

Understanding data isn't racist. Kate Andrews of London's Institute of Economic Affairs pushes back on the idea that pushing back on bad gender-wage gap statistics makes her part of the "alt-right":

This week in a @guardian column, Zoe Williams accused me of being too nice, and also of perpetuating alt-right narratives around the #genderpaygap.

My response to her vast range of opinions in today's Guardian letters' page: https://t.co/L3cWuj7244 (1/2) pic.twitter.com/APujXpakdX

As a classical liberal there is nothing I hate more than the authoritarian, anti-immigrant, racist ideology promoted by the alt-right.

To suggest anyone who engages with or challenges statistics is part of that horrible group is to shut down all possibility of civil debate. 2/2

California soda tax bill fizzles. Richard Bloom, the Democratic California assemblyman who's been pushing for a statewide tax on sugary beverages, has pulled the legislation until next year. This was his third attempt to pass the tax.

Tina Rodriguez was sentenced to life in prison for starving her baby to death. Now, other people's convictions are being thrown out due to problematic conclusions reached by the medical examiner who did her baby's autopsy. Will her case be re-examined? https://t.co/HNR4oRyfP9

"is our job to be a warm bath and an ideological safe space for people who we think are our readers? Or is it our job to show them the scope of opinions, legitimate opinions, that people all over this country have?" ⁦@bariweiss⁩ https://t.co/0oNZQe8Yrt