Investment earnings had averaged more than 10 percent annually for a decade, and most of the funds within the California Public Employees Retirement System (CalPERS) were running a surplus—meaning the funds had more than 100 percent of the assets needed to meet the projected liabilities as current workers retired. Lulled into a false sense of retirement security, state policymakers made the fateful decision to pass a law boosting pension payouts to public employees.

Supposedly, it would all be paid for by the ongoing, never-ending boom of the stock market. In an analysis provided to the state legislature at the time, CalPERS promised the new pension law would not cost "a dime of additional taxpayer money." A separate analysis conducted by the legislature itself found that taxpayers' contributions to the CalPERS system would "remain below the 1998-99 fiscal year ($766 million) for at least the next decade." said the Assembly floor analysis of SB 400.

The funny thing about pension systems, though, is that the liabilities created today—that is, the promises made to current workers—don't really become a problem for a few decades, until those workers retire.

Which is why, in California's case, looking just 10 years into the future proved to be woefully myopic. Two decades later, the surplus is long gone and CalPERS is facing a $138 billion shortfall (that's according to the system's own rather sunny accounting; the actual total is likely higher). 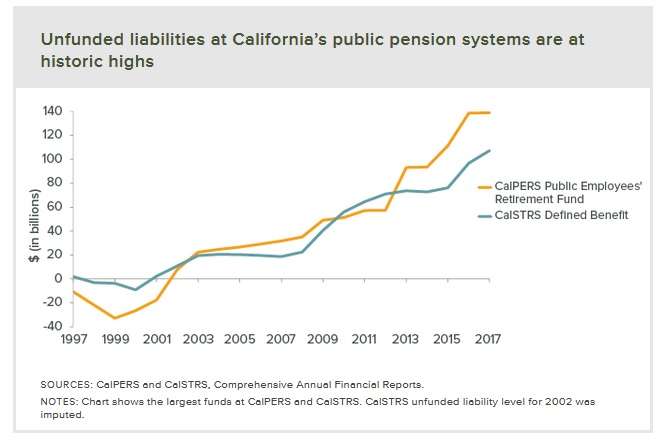 But those higher pensions promised in 1999 must still be paid—and as a result, the number of retired California public employees getting six-figure annual pensions has doubled in just six years.

According to newly released data from Transparent California, a project of the Nevada Policy Research Institute, a free market think tank, the CalPERS system issued 30,969 pensions checks in 2018 that were worth $100,000 or more on an annualized basis—up from about 14,600 six-figure payouts in 2012. Of the $23 billion in pension benefits paid out by the CalPERS system last year, 17 percent went to the members of the state's six-figure pension club.

California's teacher pension system—the California State Teachers' Retirement System (CalSTRS)—has seen a similarly sharp increase in six-figure pensions as teachers affected by the 1999 pension boost legislation have started heading into retirement. In 2018, CalSTRS handed out 15,559 pension checks worth $100,000 or more, up from just 6,033 six-figure pensions in 2011, according to Transparent California's data.

Because of how public pension systems work, the new liabilities created by that 1999 pension boost will be haunting California's state, local, and school budgets for decades to come. In fact, the worst has yet to arrive. According to a 2017 report from the Stanford Institute for Economic Policy Research, the state will have to spend $19 billion on the CalPERS and CalSTRS pension plans in 2030—up from about $9 billion this year. Those increasing costs, the Stanford report says, cannot be covered without significant cuts to existing government programs.

Because some education spending is fixed under California's Prop 98 rules and public safety funding cannot be cut under other state rules, the state will likely have to slash spending on pretty much everything else—parks, social programs, housing subsidies—so it can continue cutting six-figure checks to a few thousand of its 40 million residents.

Contra what CalPERS said two decades ago, paying for all those lush retirement benefits is going to cost Californians a whole lot of dimes.