Yes, you read that correctly. Tariffs on imported washing machines ended up increasing not only the retail price of washing machines but dryers too—despite the fact that dryers were not subject to the new import taxes imposed by the Trump administration in January 2018. Research from a trio of economists at the University of Chicago and the Federal Reserve show that retailers made the decision to hike the price of both washing machines and dryers (since they are frequently bought together) after the tariffs took effect.

All told, those tariffs raised about $82 million for the U.S. Treasury but ended up increasing costs for consumers by about $1.2 billion during 2018 economists Aaron Flaaen, Ali Hortacsu, and Felix Tintelnot conclude. Although the trade policy did cause some manufacturers to shift production from overseas to the United States in an effort to avoid the new tariffs, the 1,800 jobs created by Trump's washing machine tariffs cost consumers an estimated $820,000 per job.

The new working paper provides yet more evidence that consumers, not Chinese-based companies as the president has often claimed, are paying the costs of tariffs. The increase in retail prices for dryers also demonstrates how some businesses have taken advantage of the Trump administration's trade policy to soak consumers a second time.

"Given that many consumers buy these goods in a bundle, the price increases were partially hidden by raising the price of dryers," Tintelnot told The New York Times. "That's very clearly visible."

Indeed, the price of both washers and dryers spiked in the months after the Trump administration tariffs took effect, ending what had been a years-long decline in retail prices for both appliances. 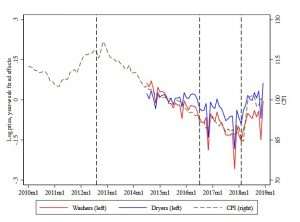 Similarly, American washing machine manufacturers—which are not subject to tariffs, obviously—decided to hike their prices after the tariffs increased prices on foreign-made washers, the economists found.

"Companies that largely sell imported washers, like Samsung and LG, raised prices to compensate for the tariff costs they had to pay. But domestic manufacturers, like Whirlpool, increased prices, too, largely because they could," writes the Times' Jim Tankersley. "There aren't a lot of upstart domestic producers of laundry equipment that could undercut Whirlpool on price if the company decided to capture more profits by raising prices at the same time its competitors were forced to do so."

When the Trump administration imposed tariffs on imported steel last year, the same thing happened: American companies raised their own prices. There are other similarities too. For example, a December 2018 report by the Economic Policy Institute (EPI), a union-backed think tank, found that Trump's aluminum tariffs had created about 300 jobs at American aluminum manufacturers—at a cost of about $2.3 million each.

The numbers change but the bottom line remains the same: Tariffs are taking consumers to the cleaners, and promised benefits are getting washed away by the costs.