"Harry Anslinger might have been a racist jerk," Alex Berenson writes in his anti-pot polemic Tell Your Children, but "he was right about marijuana." It's a bold thesis given some of the things Anslinger said about marijuana while he was running the Federal Bureau of Narcotics.

In a 1934 report to a League of Nations committee, Anslinger wrote that "fifty percent of the violent crimes committed in districts occupied by Mexicans, Turks, Filipinos, Greeks, Spaniards, Latin-Americans and Negroes may be traced to the abuse of marihuana." He quoted a California police official who said the weed "gives men the lust to kill, unreasonably, without motive—for the sheer sake of murder itself."

In 1937, Anslinger warned in The American Magazine that marijuana users "may often develop a delirious rage during which they are temporarily and violently insane," resulting in "a desire for self-destruction or a persecution complex to be satisfied only by the commission of some heinous crime." He blamed marijuana for armed robberies, "degenerate sex attacks," the random killing of an elderly bootblack, cold-blooded murders of police officers, and a rampage in which a young man hacked his entire family to death with an ax.

"How many murders, suicides, robberies, criminal assaults, holdups, burglaries, and deeds of maniacal insanity it causes each year," Anslinger wrote, "can be only conjectured." But it was clear, he said, that "there must be constant enforcement and equally constant education against this enemy, which has a record of murder and terror running through the centuries."

That same year, as Congress was considering a marijuana ban in the guise of a tax bill, Anslinger's agency told legislators the drug "frequently leads to insanity," resulting in "revolting crimes." Anslinger testified that "in some cases one [marijuana] cigarette might develop a homicidal mania" and "all the experts agree that continued use leads to insanity." 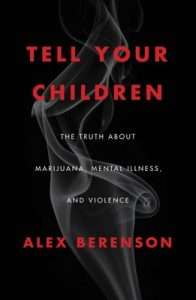 Berenson, a novelist and former New York Times reporter, agrees with Anslinger about pretty much all of that, although he is less inclined to emphasize the ethnicity of reefer-crazed rapists and murderers. In a January Times piece, he complained that he has been "mocked as a modern-day believer in 'Reefer Madness,' the notorious 1936 movie that portrays young people descending into insanity and violence after smoking marijuana." Berenson may protest the association of his name with that piece of propaganda, but he borrowed the original title of the film, Tell Your Children, and slapped it on a book that conveys essentially the same message.

"Marijuana causes psychosis," Berenson writes. "Psychosis causes violence. The obvious implication is that marijuana causes violence.…The black tide of psychosis and the red tide of violence are rising together on a green wave, slow and steady and certain." You can start to see why Berenson titled his introduction "Everything You Are About to Read Is True" and felt a need to announce, "This book is a work of nonfiction."

It is also a work of logical leaps, self-contradiction, misleading glosses, selective quotation, biased evidence gathering, and tendentious interpretation. Yet it has received a credulous reception not just from Fox News but from The New Yorker and Mother Jones. Now that most Americans support marijuana legalization, it seems, Berenson's rehash of Anslinger's hoary horror stories counts as a provocative, contrarian take.

Tell Your Children has no end notes or bibliography, which makes it harder than it should be to check Berenson's claims against his sources. But the way he uses The Health Effects of Cannabis and Cannabinoids, a 2017 report from the National Academies of Sciences, Engineering, and Medicine (NASEM), does not inspire confidence. Regarding the relationship between marijuana and schizophrenia, he says, NASEM "declared the issue settled." He quotes one of the "highlights" at the top of the relevant chapter in the report: "Cannabis use is likely to increase the risk of developing schizophrenia and other psychoses; the higher the use, the greater the risk."

Although Berenson says that's what "the scientists concluded," their official conclusion on this point is decidedly more ambiguous: "There is substantial evidence of a statistical association between cannabis use and the development of schizophrenia or other psychoses, with the highest risk among the most frequent users." Contrary to the impression left by Berenson, the nature of that relationship remains unclear.

One, two, or all three of these hypotheses might be true to some extent. As NASEM puts it, the relationship between cannabis use and psychoses "may be multidirectional and complex." The report also notes that "in certain societies, the incidence of schizophrenia has remained stable over the past 50 years despite the introduction of cannabis into those settings"—a puzzling fact if you believe marijuana use makes schizophrenia more common.

Ziva Cooper, a cannabis expert at the University of California, Los Angeles, and a member of the committee that produced the NASEM report, faulted Berenson for misrepresenting its findings. "We did NOT conclude that cannabis causes schizophrenia," Cooper said on Twitter. "We found 1) an association between cannabis use and schizophrenia and 2) an association between cannabis use and IMPROVED cognitive outcomes in individuals with psychotic disorder.…We now know that genetic risk for schizophrenia predicts cannabis use, shedding some light on the potential direction of the association." But according to Berenson, "That debate is over."

Berenson also conflates correlation with causation while discussing the purported connection between marijuana and violent crime. If criminals use marijuana more than law-abiding people—a fact Berenson considers "striking"—it does not necessarily mean marijuana turned them into criminals.

The first four states to allow recreational use of cannabis, Berenson says, "have seen sharp increases in murders and aggravated assaults since legalization." Yet University of Oregon economist Benjamin Hansen reported on the Incidental Economist blog that "the homicide rates in Colorado and Washington were actually below what the data predicted they would have been given the trends in homicides from 2000–2012."

How plausible is it that legalizing marijuana would immediately cause sharp increases in murders and aggravated assaults? "Even though marijuana is commonly used by individuals arrested for crimes, there is little support for a contemporaneous, causal relationship between its use and either violent or property crime," a 2013 report commissioned by the Office of National Drug Control Policy concluded. The authors, who are affiliated with the RAND Drug Policy Research Center, flatly stated that "marijuana use does not induce violent crime."

Two authors of that report also co-wrote Marijuana Legalization: What Everyone Needs to Know, a 2012 book that Berenson praises. He does not quote this part: "Marijuana use by itself does not produce violent crime; in fact, some studies suggest the opposite effect."

Trying to explain why the supposedly obvious causal connection between marijuana and psychotic violence has escaped the notice of experts for so long, Berenson says marijuana was so weak until the 1990s that it did not have a perceptible impact on crime. But if that's true, how did pot prohibitionists like Anslinger manage to document a wave of cannabis-induced violence?

That is not the only puzzle. Cannabis consumption has increased substantially in the United States since the early 1990s, and during that period the violent crime rate has been cut in half—not what you would expect if more marijuana means more murder.

Berenson ignores several studies that found no association between relaxed legal restrictions on marijuana and increases in violent crime. If letting people use marijuana for recreational purposes triggers a surge in homicides and aggravated assaults, you would expect to see something similar in jurisdictions that allow medical use, especially when the rules are loose, as they were in California for two decades before general legalization.

Instead of even-handedly reviewing the evidence, Berenson, like Anslinger, offers a litany of violent crimes—"each more terrible than the rest," according to his sensational but logically impossible description—that he attributes to marijuana, even when the evidence is equivocal or people close to the perpetrator disagree. If a murderer has talked about marijuana online, as far as Berenson is concerned, that shows marijuana made him do it.

"Finding violence and homicides connected to marijuana is all too easy," says Berenson. And it's true: If you're determined to prove that link, you can find lots of examples that seem to fit your theory. Explaining why police have not noticed the "red tide of violence" caused by the "green wave" of rising marijuana use, Berenson blames "confirmation bias." As he explains, "That term is a fancy way of saying that we look for evidence that supports what we think we already know."

This article originally appeared in print under the headline "Return of the Reefer-Crazed Killer".