"Crisis actor" conspiracy theories claim that various mass shootings and other public tragedies are staged by the powers that be, and that you can tell this because some of the same faces keep coming up when the media cover the crime scenes. The idea has taken off yet again in the wake of the Parkland massacre, with assorted yo-yos declaring that the survivors who have been all over TV for the last week are actually paid actors. As always, some of those yo-yos hold more prominent positions than you'd guess from the common but misleading stereotype of the conspiracy theorist as an unemployable crackpot in his mom's basement. Notably, an aide to a Florida state representative lost his job this week after claiming that two of the Parkland teens "are not students here but actors that travel to various crisis [sic] when they happen." 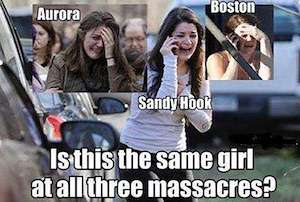 For some pundits, this isn't merely a reminder that people are capable of believing bizarre stories that are based on only the thinnest alleged evidence. The pundits worry that the rumor represents a breakdown in the media ecosystem. A ThinkProgress story, to pick one representative example, announces in its lede that these crisis-actor tales "have spread like wildfire across social media platforms—despite the repeated promises of Big Tech to crack down on fake news." The author circles back to that idea at the end, arguing that "the viral spread of the 'crisis actor' theory, along with other recent examples of highly-shared fake content, shows that [Facebook] is still ripe for misinformation and exploitation."

How ripe? The piece notes that one Facebook post touting the theory has gotten more than 110,000 shares, and that some of the videos promoting the idea have been "viewed tens of thousands of times."

We do not know how many of those 110,000 shares were trolls or bots, those crisis actors of the online world. Nor do we know how many people watched one of those videos because they were inclined to believe it, how many watched because they were inclined to laugh at it, and how many just turned it off after 30 seconds. Most importantly, ThinkProgress doesn't do anything to contextualize those numbers. MSNBC posted a video yesterday of one of the Parkland students reacting disdainfully to the idea that he's an imposter; as I type this, that's been viewed 94,000 times. That is also in the "tens of thousands," though I suppose we don't know how many of those viewers believe what they're hearing either. (The student himself suggests that the conspiracy theorists are just trolls, and that they're ultimately helping rather than hurting his anti-gun cause.)

I probably follow more weirdos on Twitter than most people do, and in my feed the overwhelming majority of tweets mentioning crisis actors have denounced, debunked, or just made fun of the theories. Of course it's possible that I just follow a better class of weirdo, so I did a Twitter search for "crisis actors" to see what sort of cross-section of opinion would appear. Of the first 30 tweets that came up, two-thirds were putting down the idea. I did the same on Facebook both Tuesday night and Wednesday morning, and I got roughly the same results, with a slightly higher percentage knocking or mocking the idea on the second day.

I also noticed that several (though not all) of the Facebook posts promoting the idea were getting pushback in the comments. So this isn't just a matter of conversations taking place in separate bubbles. Actual arguments were underway.

Now, I know very well that those are not scientific samples. I'm not going to make any grand claims here about how many people have embraced or rejected the rumor. But what I saw does at least reinforce what common sense would suggest: that widespread discussion of a bizarre belief is not the same as widespread support for a bizarre belief. That is especially true when you remember three more things:

1. Many of the people who believe the crisis-actor theory—I suspect almost all of them—are already predisposed to believe tales like this. In an earlier era, with an earlier weird rumor, they may well have whispered the story to each other in person.

2. Social media tend to make marginal ideas more visible. But this increased visibility does not always go hand in hand with increased popularity, and you should not mistake one for the other.

3. Most people still get more news from TV than from social media, and TV coverage of the crisis-actor thesis has been overwhelmingly critical of the concept. Indeed, just about all the mainstream coverage has been overwhelmingly critical of the concept. With that extra boost, there's a strong chance in this case that criticisms of the rumor have been more viral than the original rumor.

The idea that the crisis-actor story is replicating unchallenged in some endless cancerous pattern may play to people's anxieties about social media. For some, it may also play to the pleasures of highlighting the most idiotic arguments on the other side. (Debating whether a vast conspiracy is hiring kids to pose as crime victims is probably more fun than debating whether the assault weapon ban worked.) But out there in the actual internet, people are knocking these crisis-actor stories down. And the process of knocking it down is probably happening much more quickly now than in the days when such rumors unfolded in more private spaces.