In Seeing Like a State and The Art of Not Being Governed, the anthropologist and political scientist James C. Scott explores the idea of nonstate spaces. In such regions, he writes in Art, "owing largely to geographical obstacles, the state has particular difficulty in establishing and maintaining its authority." Those obstacles can take many shapes—Scott mentions "swamps, marshes, mangrove coasts, deserts, volcanic margins, and even the open sea"—but the result is the same: They become havens "for peoples resisting or fleeing the state." 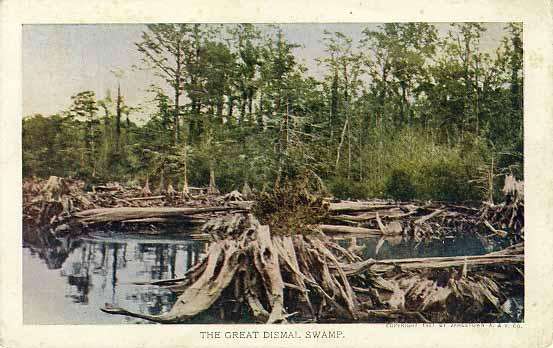 It sounds exotic, and the territory that Art ends up discussing in detail—a vast Asian area known as Zomia—is far from America. But such spaces have appeared here in the United States too. The Great Dismal Swamp in North Carolina and Virgina is, as its name suggests, an unforgiving landscape. But it was also a refuge for slaves and for others fleeing authority.

Stories have long circulated about maroon colonies in the swamp, but for obvious reasons it's hard to assemble a history of a people who avoided outsiders and didn't leave a written record. There are scattered references in various historical sources, and the swamp people occasionally turn up in works of literature, such as Dred, Harriet Beecher Stowe's follow-up to Uncle Tom's Cabin. The eccentric historian Hugo Prosper Leaming wrote a dissertation on the subject in the '70s, but Leaming was given to speculative fancies—some of his other work has been soundly debunked—and he shouldn't be taken as the last word on anything, fun though he is to read.

The swamp eventually turned up in anarchist texts too, such as James Koehnline's prose-poem "The Legend of the Great Dismal Maroons." But Koehnline didn't pretend to be doing anything akin to conventional scholarship. He was sketching out an imaginative secret-history tale of Masonic conspiracies and counter-conspiracies, of utopian autonomous enclaves and a long war for freedom. Here's an excerpt:

By 1708 political forces in England had determined
that the time had arrived to develop North Carolina
as a commercial plantation slavery colony.
This necessitated a full-scale war against the old settlers,
which was followed by a full-scale war with their allies,
the Tuscarora nation.
The British declared victory and established their colony.
The Maroons never admitted defeat.
They retreated to the depths of the Great Dismal Swamp
and from their sanctuary waged a 160-year guerrilla
war against slavery. In the end, they won.
They fought alongside the British under Lord Dunmore
in the revolution, because Dunmore promised an end to
slavery and gave them uniforms with a special sash
that read "Freedom For Slaves".
They fought as "Buffalo Soldiers" on the side of the Union
in the Civil War, holding all the surrounding territory
without army support.
In between, they sent out continuous raiding parties
to free slaves and discourage slavers.
They established an extensive communication system
throughout the upper south through a network of plantation
preachers and conjuremen and women.
The swamp had been considered a holy place by the Indians
since time immemorial.
It was now doubly so for the slaves and Maroons.

It's a great story, but it's more like a William Burroughs or Robert Anton Wilson novel than a social history of the swamp. If you want to look past that romantic vision to see how those liberated slaves actually lived in that harsh marshy world, it won't get you far.

But gradually we're learning more. The September issue of Smithsonian reports that archeologists have been exploring the swamp and doing what they can to reconstruct the lives of the people who lived there:

In early 2004, one of the refuge biologists strapped on his waders and brought [the American University archeologist and anthropologist Dan] Sayers to the place we're going, a 20-acre island occasionally visited by hunters, but completely unknown to historians and archaeologists. Before Sayers, no archaeology had been done in the swamp's interior, mainly because conditions were so challenging. One research party got lost so many times that it gave up.

When you've been toiling through the sucking ooze, with submerged roots and branches grabbing at your ankles, dry solid ground feels almost miraculous. We step onto the shore of a large, flat, sun-dappled island carpeted with fallen leaves. Walking toward its center, the underbrush disappears, and we enter a parklike clearing shaded by a few hardwoods and pines.

"I'll never forget seeing this place for the first time," recalls Sayers. "It was one of the greatest moments of my life. I never dreamed of finding a 20-acre island, and I knew instantly it was livable. Sure enough, you can't put a shovel in the ground anywhere on this island without finding something."

Sayers has his own ideological axes to grind—he's a Marxist—but he's finding real artifacts in actual places where the maroons lived, and in the process he and his colleagues are uncovering a long-hidden chapter of our history. At one point in the Smithsonian piece, a museum curator comments that the "Dismal Swamp maroons found a way to remove themselves completely from the United States, in the recesses of its geography." They found their own American Zomia in the Carolinas.