The highest office that Hillary Clinton has held is secretary of state, and the biggest blot on her record in that job is the military intervention in Libya. Not surprisingly, Donald Trump has been attacking her for it. But to judge from his latest comments on the subject, he may not be capable of making his case coherently. 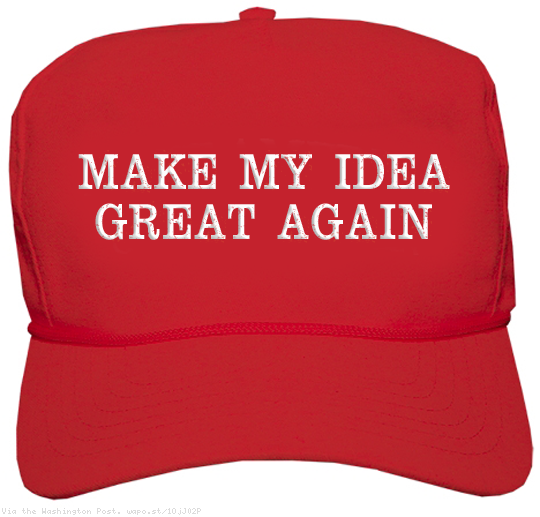 Some background: Back in 2011, when Libyan dictator Moammar Qaddafi was cracking down on a rebellion, Trump declared that "we should go in. We should stop this guy, which would be very easy and very quick. We could do it surgically, stop him from doing it and save these lives." NATO then intervened, with disastrous results. Since entering the presidential race last year, Trump has harshly criticized the Libya war, with few hints of his earlier support for it; last fall, for example, when NBC's Chuck Todd asked him if the Middle East would be better off if Qaddafi were still in power, he replied, "Of course it would," and declared that post-Qaddafi Libya is "not even a country anymore."

Clinton, meanwhile, still insists that the Libyan operation was "smart power at its best." So there is an opening here for Trump to say, "Hillary Clinton and I both supported intervention in Libya. I learned from my mistake, and she didn't." But that isn't what he's saying, perhaps because it would entail admitting that he had made a mistake. On Face the Nation yesterday, confronted with his original position, Trump tried to pretend he'd never changed his mind on the subject at all:

DONALD TRUMP: I didn't mind surgical. And I said surgical. You do a surgical shot and you take them out.

But I wasn't for what happened. Look at the way it's—look at—with Benghazi and with all of the problems that you have had. It was handled horribly.

DICKERSON: But you said you were never for intervention.

TRUMP: I was never for a strong intervention. I could have seen surgical, where you take out Qaddafi and his group.

I'm sure the Libya hawks in the Hillary camp would also prefer a timeline where their war went off without any bad bits. But if Trump has any ideas about how the Pentagon could have "take[n] out Qaddafi and his group" without creating a situation where Libya is "not even a country anymore," he didn't share them. Instead he's basically saying I'm for a Libya war that worked out better, without Benghazi and all that. Which is a bit like saying The Iraq war was a great idea, except for the insurgency or Going into Vietnam was wise, as long as we could've had a quick victory.

If Trump cannot coherently denounce the worst decision Clinton made as secretary of state, perhaps the Libertarian ticket of Gary Johnson and William Weld can step in and make the case? That would be good to see, but the party may need to muzzle its vice presidential pick first. From a New York Times story last week:

Mr. Weld gave a single-word response about whether Mrs. Clinton was a good secretary of state: "Yes."

Democrats Still Want to Spend Trillions. But They Don't Want To Raise Taxes To Do It.