SiriusXM announced today that it is suspending talk show host Glenn Beck for a week, following an interview last Wednesday in which a guest made comments that the company felt "may be reasonably construed by some to have been advocating harm against an individual currently running for office."

The guest was Brad Thor, a popular novelist with conservatarian politics. In his interview, Thor compared Donald Trump to a Latin American caudillo and suggested that Trump, if president, would suspend the Constitution and seize dictatorial powers. Then came the controversial part. "It is a hypothetical I am going to ask as a thriller writer," Thor said to Beck. "With the feckless, spineless Congress we have, who will stand in the way of Donald Trump overstepping his constitutional authority as president? If Congress won't remove him from office, what patriot will step up and do that—if, if, he oversteps his mandate as president? His constitutionally granted authority, I should say, as president. If he oversteps that, how do we get him out of office?" Thor added that he doesn't "think there is a legal means available. I think it will be a terrible, terrible position the American people will be in, to get Trump out of office, because you won't be able to do it through Congress." 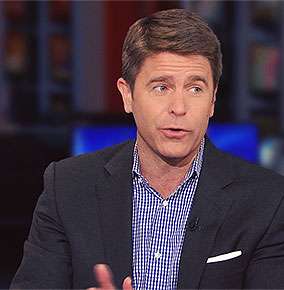 Several people took this as a suggestion that someone should kill Trump, an interpretation Thor strenuously denies. "It's not a defense of assassination," he told Reason today. "I don't even want to see a dictatorial president assassinated. We are a republic—a nation of laws—and the greater good would be served by the despot standing trial." And if there's no trial? "Safeguarding the republic against a dictatorship is a topic of conversation that dates back to the Founders," he says. "If we had to unseat a president without the backing of the Congress, we would need a patriot along the lines of George Washington to lead the country from tyranny back to liberty."

Thor's appearance on the Beck show is embedded below, with the relevant section starting shortly after the four-minute mark:

My thoughts: I understand why people took the words "what patriot will step up and do that" as a casting call for an assassin, but it's also true that there are forms of extralegal political action that stop well short of the Oswald option. In any event, it's clear that Thor's scenario was set not on the current campaign trail but in a hypothetical future where a president is playing Perón.

If nothing else, this shows just how quickly American politics have been scrambled. If you said seven years ago that the Glenn Beck show would one day get into trouble for airing comments that were widely construed as a call to assassinate an American president, a lot of pundits would have nodded their heads sagely. But they might not have believed you if you added that the president in question would be a Republican denounced as a fascist by the same people who used to throw that sort of accusation at Glenn Beck.