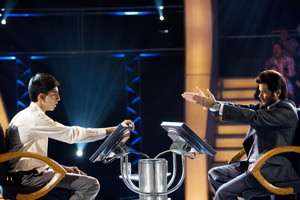 The film's depiction of the legendary Dharavi, which is home to some one million people, is that of a feral wasteland, with little evidence of order, community or compassion. Other than the children, the "slumdogs," no-one is even remotely well-intentioned. Hustlers, thieves, and petty warlords run amok, and even Jamal's schoolteacher, a thin, bespectacled man who introduces him to the Three Musketeers, is inexplicably callous. This is a place of evil and decay; of a raw, chaotic tribalism.

Yet nothing could be further from the truth. Dharavi teems with dynamism and creativity, and is a hub of entrepreneurial activity, in industries such as garment manufacturing, embroidery, pottery, and leather, plastics and food processing. It is estimated that the annual turnover from Dharavi's small businesses is between US$50 to $100 million. Dharavi's lanes are lined with cell-phone retailers and cybercafés, and according to surveys by Microsoft Research India, the slum's residents exhibit a remarkably high absorption of new technologies.

Governing structures and productive social relations also flourish. The slum's residents have nurtured strong collaborative networks, often across potentially volatile lines of caste and religion….Although it is true that these severely under-resourced self-help organizations have touched only the tip of the proverbial iceberg, it is important to acknowledge their efforts and agency, along with the simple fact that these communities, despite their grinding poverty, have valuable lives, warmth, generosity, and a resourcefulness that stretches far beyond the haphazard and purely individualistic, Darwinian sort portrayed in the film.

Caveat: I haven't seen the movie yet! If Sengupta is ignoring scenes that cut against her thesis, you'll have to tell me in the comment thread.