I wonder how many liberal journalists have ever watched Bedtime for Bonzo. It's actually quite funny to see Reagan as a young liberal college professor trying to prove the "nurture" side of the nature-vs.-nurture and saying that there are no bad kids, just bad environments. 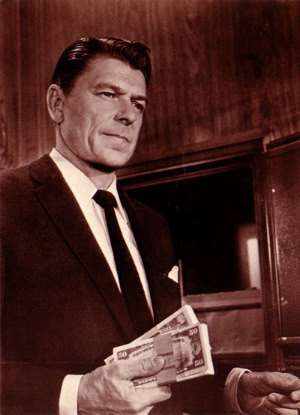 True enough. But if you really enjoy Reagan roles that rub uneasily against his political persona, the movie to watch is Don Siegel's remake of The Killers, with the future president as a violent villain. His best line: "I approve of larceny; homicide is against my principles."

Reagan was already getting involved with politics when he appeared in that picture—it came out in 1964, just two years before he was elected governor of California—but he didn't try to weasel out of the part. I'm not a Reaganite, but I give the man credit for that. And for pardoning Merle Haggard. And for killing the Fairness Doctrine. And for that joke that pissed off so many people: "My fellow Americans, I'm pleased to tell you today that I've signed legislation that will outlaw Russia forever. We begin bombing in five minutes." I was a firmly liberal 13-year-old when he said that, but I just couldn't go along with the condemnations raining down from my side of the aisle—it seemed too much like something I would say if I somehow got to be president. (Note: Do not ever allow me to become president.)

Where was I? Oh, yes: The Killers. Rent the Criterion edition, which also includes Robert Siodmak's underrated 1946 film of the story and, among many bonuses, a 19-minute version by a young Andrei Tarkovksy. As I've said before, the thought of Tarkovksy making anything so short boggles the mind, but Tark fans needn't be disillusioned: In his hands, 19 minutes feels like three hours.