From Mumma v. Pathway Vet Alliance, LLC, decided Wednesday by Magistrate Judge Thomas Farrish (D. Conn.); for more on the employee free speech protection statutes such as the one in this case, see this article and this one: 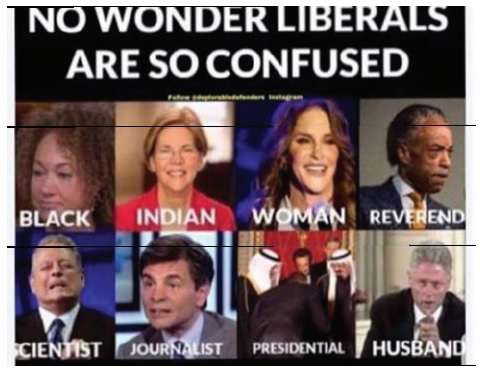 Dr. Moore [a manager at Pathway] saw the meme on either June 9 or June 10. She testified that when she first saw it, she "had some concerns because [she] could see how people would find it offensive." She was particularly concerned about the Jenner and Warren panels, because she regarded them as "potentially very offensive to protected classes of people." With respect to the Warren panel, Dr. Moore observed that the use of the term "Indian" in place of "Native American" "can be taken offensively," but "[i]t was more that the … goal of this meme was to question how people identify themselves." And with respect to the Jenner panel, Dr. Moore "personally [found] it offensive to question how a transgender person chooses to identify themselves." …

Dr. Moore … [also] receive[d] complaints from other Thrive employees who had seen the meme. Lee Pitts found it "offensive," particularly the Jenner panel. Sara Lisak "was really disappointed" and "surprised" because "she wouldn't expect this from Candice," and she regarding the meme as "hateful and derogatory." Chrissy McGregor "also expressed disappointment … and confusion … and she shared … that she just wouldn't have expected such a harmful or hurtful post from Candice toward so many people." Another employee, Kendra Williams, complained in an e-mail that the meme was "hateful, intolerant and anti-inclusive—specifically to our transgendered community." Dr. Moore grew concerned "that the members of the team would not be able to work closely with [Ms. Mumma], trust her, have a good, open working relationship with her," but at her deposition she conceded that none of those people "expressed to [her] directly that they would not be able to work with Candice going forward."

Dr. Moore and Ms. Shields discussed the meme, and afterwards Ms. Shields convened a videoconference with Ms. Mumma on June 11, 2020…. Ms. Shields … explained that Ms. Mumma "is in a very visible role as a recruiter in which we need to be aware of diversity, equity, and inclusion," and that her post—"which is on a public Facebook page open to everyone"—"could be seen by potential candidates and in fact was seen by several employees who became upset by this content." For her part, Ms. Kelley-Valles asked Ms. Mumma if she "would consider making her Facebook private," but Ms. Mumma said she would not.

Mumma was fired, and sued under the Connecticut employee free speech statute, which provides, in relevant part:

Any employer … who subjects any employee to discipline or discharge on account of the exercise by such employee of rights guaranteed by the first amendment to the United States Constitution or section 3, 4 or 14 of article first of the Constitution of the state, provided such activity does not substantially or materially interfere with the employee's bona fide job performance or the working relationship between the employee and the employer, shall be liable to such employee for damages cause by such discipline or discharge, … and for reasonable attorney's fees as part of the costs of any such action for damages.

And the court allowed Mumma's claim to go forward:

To establish a prima facie case under Section 31-51q, the plaintiff must show "(1) that she engaged in constitutionally protected speech, (2) that her employer took an adverse action against her, and (3) that there was a causal relationship between the protected activity and the adverse action." … In this case, Thrive concedes that Ms. Mumma has satisfied these three elements….

A successful Section 31-51q claim requires more than proof of these three elements, however; it also requires that the employee's exercise of her free speech rights "not substantially or materially interfere with [her] bona fide job performance or the working relationship" with the employer…. [C]ourts [interpreting this provision] … apply the balancing test articulated by the United States Supreme Court in Pickering v. Board of Education (1968).

In applying the Pickering test, courts seek to balance the employee's free speech rights with the employer's interest in workplace efficiency. Under Pickering, "several factors are relevant, including: 'the extent of the disruption caused by the employee's speech on (1) workplace discipline, (2) harmony among co-workers, (3) working relationships, (4) the employee's job performance, (5) the responsibilities of the employee within the agency and (6) whether the speech is made publicly or privately. …'" This list of factors is not exclusive, because "[a] single, mechanical test will not do for a salmagundi of challenges, involving both on-and off-duty speech, job-related and not, spoken in protest, for laughs, or, as often, just because." …

In this case, Thrive argues that there are no genuine, material factual disputes to be tried on the interference prong under any of the available modes of analysis…. [I]t contends that the Pickering test breaks in its favor, because "[t]he undisputed evidence makes clear that the Plaintiff's public posting disrupted harmony among her co-workers and caused concern about ongoing work relationships, as well as her ability to continue to execute her responsibilities as a recruiter dealing with the public on behalf of the company."

Applying these principles to this case, the Court concludes that there are genuine disputes of material fact on the issue of pretext that preclude summary judgment. Thrive's proffered non-retaliatory reason for terminating Ms. Mumma is that her Facebook post "potentially violated anti-harassment law, violated company policy, and negatively impacted company operations." But when asked at her deposition to state the reason for the termination, Dr. Moore did not say this. She instead testified that Thrive terminated Ms. Mumma because she "posted something to social media that was offensive and derogatory to multiple groups of people." While the doctor was "concern[ed]" about the effect of the post on workplace relationships, she did not cite potential impacts on company operations or fear of legal liability as the actual reasons for the termination.

Ms. Shields' testimony more closely resembled what Thrive claimed in its brief, but even her testimony is not sufficiently clear to support dismissing Ms. Mumma's Section 31-51q claim on summary judgment. Ms. Shields testified that "Candice was separated for posting material to her Facebook page … that was offensive and did not comply with our employee handbook standards, our values, and showed disregard for diversity, equity, and inclusion." But it would require an inferential step to conclude that non-compliance with employee handbook standards or disregard for diversity, equity and inclusion equals concern for potential legal liability or a negative impact on company operations, and on summary judgment the inferences are drawn against Thrive, not for it. The common thread in Ms. Shields' and Dr. Moore's comments is that the company regarded Ms. Mumma's speech as "offensive," and while a reasonable jury could infer that that this is a form of shorthand for concern about the disruption that might flow from an offensive meme, it could also conclude on the current record that Thrive was simply offended by the content of the speech.

Thrive phrased its explanation somewhat differently in its reply brief, but with this explanation too, genuine disputes of material fact exist. In its reply, Thrive claimed to have "terminated Ms. Mumma because of actual complaints from co-workers and reasonable concerns about her posting's negative impact on relationships within the recruiting team and perceptions of the company by the public." Yet with respect to co-workers on the recruiting team, the summary judgment record contains sufficient evidence for a reasonable jury to conclude that this explanation is pretextual.

While some co-workers complained about the Facebook meme, none asked Thrive to take any specific action, let alone termination. Lee Pitts did not "specifically ask for something to be done." Sarah Lisak likewise "did not express specific requests for action to be taken." Christine Markulis did not ask for Ms. Mumma to be disciplined, and Kendra Williams similarly did "not expect any action." Of course, an employer may act against harassing conduct without first being asked to do so by its employees. But where, as here, the employer contends that it terminated an employee because of complaints about the employee's speech, it is relevant that the complainants did not request any action. Under the circumstances of this case, a jury could reasonably conclude that Ms. Mumma was terminated not because of the disruption caused by her speech, but rather for the speech itself.

Thrive points to a negative "impact on relationships within the recruiting team," Mem. at 18), but the record contains scant evidence of even potential impacts, and no co-worker stated that he or she would be unable to work with Ms. Mumma in the future….

Thrive also points to "perceptions of the company by the public, particularly potential job candidates," but here too, factual disputes exist. Thrive concedes that Ms. Mumma did not use Facebook to "friend" or otherwise contact recruiting candidates. Ms. Mumma states that her Facebook page "has nothing to do with THRIVE on there," and that although it is not a "private" page, no one who viewed it would connect her with Thrive because (among other reasons) it "[does] not have any pictures of me in THRIVE gear on there." Dr. Moore evidently disagrees; she recalled looking at Ms. Mumma's page and observing references to Thrive. But this factual disagreement makes the issue inappropriate for resolution on summary judgment….