Reason is supported by:
Michael Stein 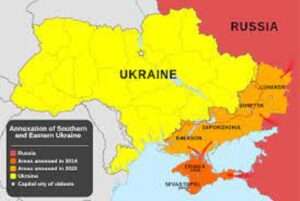 Vladimir Putin's regime is today in the process of trying to annex four regions of Ukraine: Luhansk, Donetsk, Zaporizhzhia and Kherson. Like the previous conquest and annexation of Crimea in 2014, this move is both illegal and deeply unjust. Russia's use of "referendums" to legitimate its land grap cannot change that. Many of the reasons why are blatantly obvious. But they do have some not entirely obvious broader implications.

Legally speaking, Russia's attempt to annex the four regions is a gross violation of one of the most basic principles of international law: the ban on waging wars of aggression for purposes of seizing another state's territory.The United Nations Charter specifically forbids "the threat or use of force against the territorial integrity or political independence of any State." The Nuremberg tribunal ruled that starting a war of aggression is "the supreme international crime." No referendum—even a completely fair and honest one—can cure that illegality.

Some might still argue that a regional majority has a moral right to secede and join another state, even if doing so is illegal. But that, too, cannot justify Russia's annexation plan. The referenda were rife with coercion and fraud to the point where people have been literally forced to vote for annexation at gunpoint. On top of that, Russia has forcibly deported some 1 million or more people from the occupied territories, killed or detained opponents of its policies, and led hundreds of thousands of others to flee, as refugees. Obviously, all these people had no say in the "referendums." If they had a choice, they almost certainly would not opt to join Russia. In sum, the annexation referenda were even more bogus than the 2014 Crimean referendum was.

As in the case of Crimea, even a truly fair majority vote in favor of annexation would not be enough to justify the imposition of a regime that is as repressive as that which Russia has imposed on the parts of Ukraine it has seized. In a post written at the start of the current Russian invasion in February, I summarized the oppressive nature of Russian rule in Crimea and the Donbass. Things have gotten even worse since then, as Russian forces have committed large-scale atrocities, and engaged in mass deportation of civilian populations. No majority vote can legitimize a regime like that. Being in the majority does not create a right to violate basic human rights of others.

Ukrainian rule in these areas is far from perfect. The Ukrainian government's human rights record has flaws of its own. But it is incomparably superior to annexation by a brutal tyranny.

Russia's claims to these regions are harder to reject if you believe that people have a right to be ruled by governments controlled by the same ethnic and linguistic group as they belong to themselves. Like in Crimea, many of the people in these four regions—perhaps even a majority—are either ethnic Russians, Russian-speaking Ukrainians, or some combination of both. Culturally, many may have more in common with Russians than with western Ukrainians, who primarily speak Ukrainian.

But the fact that people speak Russian and embrace various aspects of Russian culture doesn't necessarily mean they want to be ruled by the Kremlin. Available survey data and other evidence suggests most Russian-speaking Ukrainian citizens in fact do not want to be ruled by Vladimir Putin's regime. This data is reinforced by the even more powerful testimony of people voting with their feet. When Russia seized parts of these regions in 2014, and more at the start of the broader invasion earlier this year, millions fled west. By contrast, when Ukrainian forces recaptured parts of these areas in recent weeks, there was no such mass exodus. Only small numbers of collaborators chose to flee with the retreating Russian forces. Just as, historically, many English-speakers decided they did not want to be ruled by Britain, so today many Russian-speakers in Ukraine (and perhaps elsewhere) do not want to be ruled by Russia.

Even if ethno-nationalist considerations can justify annexation when the population of the region in question wants to be united with its supposed co-ethnics, in this case it pretty clearly does not. To justify Russia's annexation plans, nationalists have to argue that annexation of territories populated by co-ethnics is justified even if most of the population subject to the takeover is opposed to it.

For reasons in Chapter 5 of my book Free to Move: Foot Voting, Migration, and Political Freedom (see also this article), I reject, on principle, the theory that governments have a right to rule particular territories based on ties of race, ethnicity, or culture. Along the same lines, I also reject the view that regional ethnic majorities have a right to insist on being ruled by a state controlled by their own group. Governments should be judged by how well they respect human rights and promote the freedom and happiness of the populations they rule, not by their racial or ethnic compositions. Thus, Moscow has no special right to rule people who speak Russian or affiliate with Russian culture. And ethnic Russians in other states do not have a special right to insist on annexation by the Kremlin, even if they happen to be a majority in a given region.

But if you accept the conventional wisdom that ethno-nationalist territorial claims have a measure of validity, then Russia's annexations become somewhat harder to condemn. That may especially be true of Crimea, where ethnic Russians were actually a majority of the population, when Russian forces seized the territory in 2014. Even then, ethno-nationalist considerations should give way in situations where the government with the seemingly stronger ethnic claim is vastly more oppressive—as is surely true when we compare Russia to Ukraine.

But defenders of ethno-nationalism might have to accept at least some degree of repression and human rights violations in cases where that is the only way to ensure that the "right" ethnic group rules the region in question. To my mind, that is yet another reason to simply reject ethno-nationalism entirely. Even a relatively small amount of oppression is too much to accept merely so that ethnic or racial Group A gets to control the government of a region rather than Group B. Race and ethnicity are morally arbitrary characteristics that do not justify sacrificing even one innocent person's life or liberty. If you think otherwise (and I admit many, perhaps even most, people do), you should at least consider how much sacrifice of this sort is morally defensible. Russia's aggression against Ukraine highlights the awful reality that such trade-offs are stark and real.

UPDATE: I have made a few modest changes and additions to this post.