Heller explained that public carry could be restricted in so-called "sensitive" places. And Bruen reaffirmed that limitation. Just in case anyone forgot, Justice Kavanaugh's concurrence block-quoted the worst passage from Justice Scalia's majority opinion. Bruen did not have occasion to define a "sensitive" place. But one specific locale popped up during oral argument.

JUSTICE BARRETT: I mean, I guess it's about the level of generality, all these questions that Justice Kagan's asking you or that the Chief asked you, if—if you concede, as I think the historical record requires you to, that states did outlaw guns in sensitive places, can't we just say Times Square on New Year's Eve is a sensitive place? Because now we've seen, you know, people are on top of each other, we've—we've had experience with violence, so we're making a judgment, it's a sensitive place.

Paul Clement countered that restrictions on guns for New Year's Eve would be more akin to a time-place-manner restriction:

MR. CLEMENT: So here—here's what I would suggest, that the right way to think about limiting guns in Times Square on New Year's Eve is not as a sensitive place but as a time, place, and manner restriction. And that might be a perfectly reasonable time, place, and manner restriction, but I don't think that's—the sensitive places doctrine, as I understood it, from—and, obviously, it's a brief reference in the Heller decision, so I—I may not fully understand it—but I understood that those were certain places where they were just no weapon zones all of the time because of the nature of that institution. And I think it's probably worth thinking about rallies and Times Square, that there may be restrictions, but they would be done —

Barbara Underwood, the New York Solicitor General, hinted that it would not be enough to ban guns only on New Year's Eve, because the area is so congested.

MS. UNDERWOOD:Well, essentially . . . it would be very hard in the first instance . . . to specify in advance all the places that ought properly to be understood as sensitive. So it sounds like a very convenient alternative, but, for example, we were talking about Times Square on New Year's Eve.

Times Square on—when the theater district—when—when—when commerce is in full swing, Times Square almost every night is shoulder-to-shoulder people. So then you—you end up having a very big difficulty in specifying what all the places are that have the characteristics that should make them sensitive.

To no one's surprise, New York City has banned public carry in Times Square 24 hours a day, 365 days a year. And Times Square is not defined how I remember it–roughly a five-block sweep, bordered between Seventh Avenue and Broadway. Wikipedia confirms my understanding:

Times Square is a major commercial intersection, tourist destination, entertainment hub, and neighborhood in Midtown Manhattan, New York City. It is formed by the junction of Broadway, Seventh Avenue, and 42nd Street. Together with adjacent Duffy Square, Times Square is a bowtie-shaped space five blocks long between 42nd and 47th Streets.

Soon enough, this Wikipedia page will be scrubbed, so I took a screenshot. Truth must conform to progressive orthodoxies.

No, New York has selected the area from Ninth to Sixth Avenues, and from 53rd to 40th Streets–a total of three-dozen blocks. 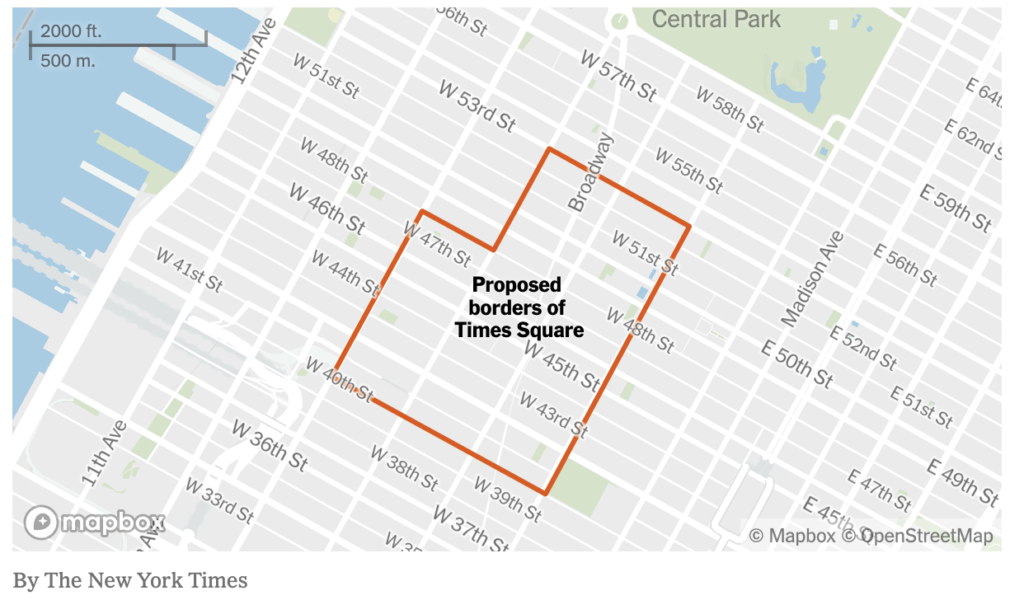 In a statement, the police department said that Times Square was "not just a few streets with bright lights and video screens. It's a unique, dense, complex space, and the area designated in our rules and the proposed bill reflects that reality."

At a City Council hearing on Tuesday, Robert Barrows, the executive director of the police department's legal operations and projects, said that the area would be marked by signs that warn pedestrians that the area is a "gun free zone."

What about people who live in this area? They will be able to carry. And if you are in a vehicle, you can drive through the area, but your gun must be carried in a locked container and unloaded, and you cannot stop. (Sounds a lot like the rule at issue in New York State Rifle Pistol Association v. New York City). It will be very hard to get cross-town with those rules in effect.

We still do not know if the "campus" of New York University will be a "sensitive" place.

There will be litigation. Maybe the Supreme Court will still care about New York in a few years.

As best as I can tell, the City has mirrored the closings for–you guessed it!–New Year's Eve, though the gun boundary stops at 51st Street rather than 59th Street (Central Park South). For those who care, Trump Tower (on 57th Street) is outside of Times Square.

It's like T.G.I. McScratchy's Goodtime Foodrinkery, where every night is New Year's Eve!

I grew up in New York City, but never once went to Times Square for the ball drop. That was something only tourists did–much like going to the top of the Empire State Building (still never been!). However, I was in Times Square on December 31, 2013. The American Association of Law Schools held the annual meeting at the Midtown Hilton. But the Marriott Marquis offered a member rate on New Year's Eve! I couldn't believe it, so I booked it. The window in my room offered a very obstructed view of Broadway. And no, you couldn't wait in the lobby bar. All those seats sold for a premium. But around 11:45, I went outside and stood on the street. I couldn't quite see the ball drop, but I got the experience. Then I quickly rushed back into my warm hotel room. Fun fact: that evening, Circuit Justice Sotomayor issued an emergency stay on the shadow docket to protect the Little Sisters of the Poor from the contraceptive mandate. However, Sotomayor did not issue an emergency stay in the Utah same-sex marriage litigation. There was a flurry of activity that night! And at midnight, Sotomayor dropped the ball! I wrote all about the evening here, and in my second book Unraveled.