Shortly after Kennedy v. Bremerton School District was decided, I wrote that the Lemon test was finally interred. I observed that "Justice Gorsuch's majority opinion does not overrule Lemon in so many words, but the import of the ruling is clear--follow Town of Greece, not Lemon." Indeed, we do not get the magic words that we read in Dobbs:

Lemon was egregiously wrong from the start. Its reasoning was exceptionally weak, and the decision has had damaging consequences. We hold that Lemon must be overruled.

Instead, Justice Gorsuch mustered this passage, which acted as if that Lemon was already overruled--or something like that.

What the District and the Ninth Circuit overlooked, however, is that the "shortcomings" associated with this "ambitiou[s]," abstract, and ahistorical approach to the Establishment Clause became so "apparent" that this Court long ago abandoned Lemon and its endorsement test offshoot. American Legion; see also Town of Greece v. Galloway (2014) . . .

In place of Lemon and the endorsement test, this Court has instructed that the Establishment Clause must be interpreted by "'reference to historical practices and understandings.'" Town of Greece.

Not quite. Town of Greece did not overrule Lemon. And American Legion, which Justices Breyer and Kagan joined, did not formally overrule the precedent. Justice Sotomayor points out the obvious:

Despite all of this authority, the Court claims that it "long ago abandoned" both the "endorsement test" and this Court's decision in Lemon. The Court chiefly cites the plurality opinion in American Legion v. American Humanist Assn. (2019) to support this contention. That plurality opinion, to be sure, criticized Lemon's effort at establishing a "grand unified theory of the Establishment Clause" as poorly suited to the broad "array" of diverse establishment claims. All the Court in American Legion ultimately held, however, was that application of the Lemon test to "longstanding monuments, symbols, and practices" was ill-advised for reasons specific to those contexts. The only categorical rejection of Lemon in American Legion appeared in separate writings. See (KAVANAUGH, J., concurring); (THOMAS, J., concurring in judgment); (GORSUCH, J., concurring in judgment). [FN6] The Court now goes much further, overruling Lemon entirely and in all contexts. It is wrong to do so. . . .  It is true "that rigid application of the Lemon test does not solve every Establishment Clause problem," but that does not mean that the test has no value. American Legion (KAGAN, J., concurring in part).

Ditto for Shurtleff, which did not overrule Lemon:

FN6: The Court also cites Shurtleff v. Boston (2022), as evidence that the Lemon test has been rejected. Again, while separate writings in Shurtleff criticized Lemon, the Court did not. The opinion of the Court simply applied the longstanding rule that, when the government does not speak for itself, it cannot exclude speech based on the speech's "'religious viewpoint.'" Shurtleff. The Court further infers Lemon's implicit overruling from recent decisions that do not apply its test. As explained above, however, not applying a test in a given case is a different matter from overruling it entirely and, moreover, the Court has never before questioned the relevance of endorsement in the school-prayer context.

Lemon was never actually overruled. And I'm not exactly sure what "abandoned" even means in this context. Does this statement really count as a red flag? According to WestLaw, the "abrogation" of Lemon was recognized by Kennedy. 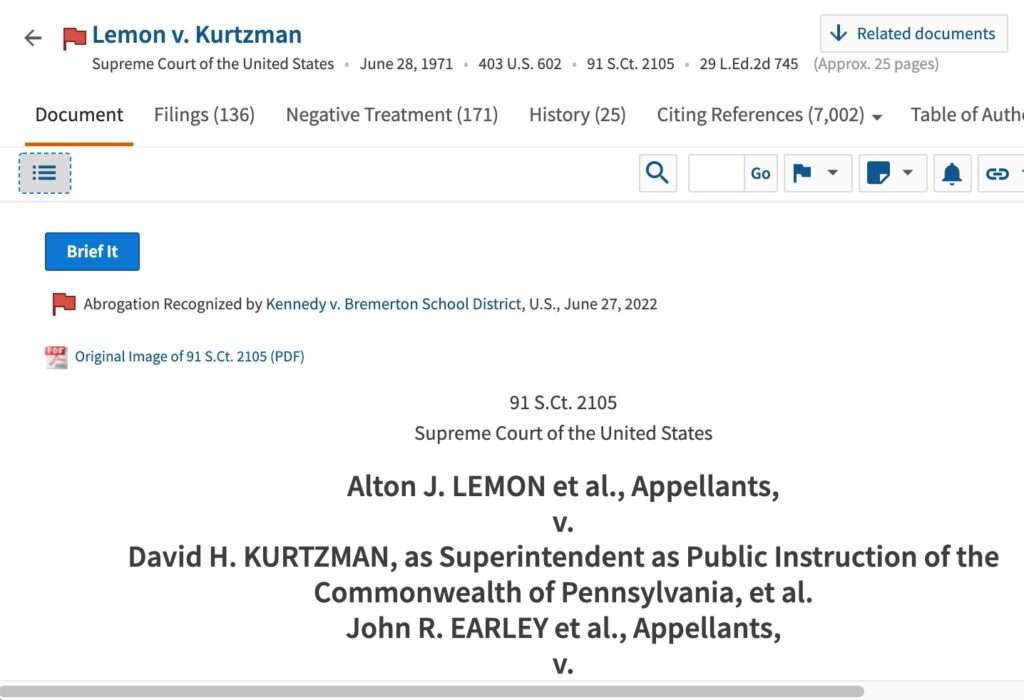 So why did the Court not formally overrule Lemon? For starters, Coach Kennedy never made such a request. Indeed, he couldn't have, as he did not bring claims under the Establishment Clause. Of course, the lower courts invoked Lemon to rule against Kennedy's Free Exercise and Free Speech claims, but the Establishment Clause was not at issue directly.

Still, going forward the lower courts have "instructions" from the Supreme Court.

In place of Lemon and the endorsement test, this Court has instructed that the Establishment Clause must be interpreted by "'reference to historical practices and understandings.'" Town of Greece.

Though, I'm sure some district court judge, somewhere will write, "Unless a majority of the Supreme Court formally overrules Lemon, I will continue to follow it." Old precedents die hard.

Speaking of "text and history," Justice Sotomayor included one of the first citations of Dobbs and Bruen in a judicial opinion.

The Court reserves any meaningful explanation of its history-and-tradition test for another day, content for now to disguise it as established law and move on. It should not escape notice, however, that the effects of the majority's new rule could be profound. The problems with elevating history and tradition over purpose and precedent are well documented. See Dobbs (BREYER, SOTOMAYOR, and KAGAN, JJ., dissenting) (explaining that the Framers "defined rights in general terms to permit future evolution in their scope and meaning"); New York State Rifle & Pistol Assn., Inc. v. Bruen (2022) (BREYER, J., dissenting) (explaining the pitfalls of a "near-exclusive reliance on history" and offering examples of when this Court has "misread" history in the past); Brown v. Davenport (2022) (KAGAN, J., dissenting) (noting the inaccuracies risked when courts "play amateur historian").

It is true that Lemon was not at issue in Carson. But the Court discussed it at some length. I will explain why in another post.