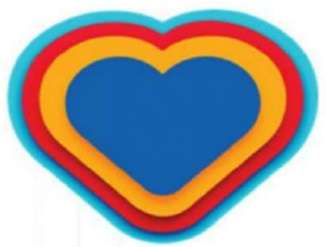 This case arises from Kroger's termination of two employees. The Equal Employment Opportunity Commission alleges that these terminations amount to religious discrimination and retaliation in violation of Title VII of the Civil Rights Act of 1964. Kroger disagrees.

The two employees at issue—Brenda Lawson and Trudy Rickerd—worked at a Kroger store in Conway, Arkansas. They were fired after refusing to follow the new employee dress code established by Kroger. That new dress code required most store employees to wear an apron that prominently featured a multi-colored heart symbol [pictured above -EV]. Lawson and Rickerd felt that the multi-colored heart symbol supported and promoted the LGBTQ community. That was a problem for Lawson and Rickerd because they both have sincerely held religious beliefs that homosexuality is a sin and that they cannot support or promote it.

After being reprimanded for their refusal to follow the dress code, but before termination, Lawson and Rickerd each requested a religious accommodation from Kroger. Lawson requested that she be allowed to place her nametag over the multi-colored heart. Rickerd requested that she be allowed to purchase an apron without the multi-colored heart on it. They both told Kroger that the failure to allow such accommodations (and continued discipline regarding this dress-code issue) would be religious discrimination.

Kroger neither granted the requested accommodations nor suggested any other potential accommodations. Instead, Kroger attempted (on multiple occasions) to explain to Lawson and Rickerd that the multi-colored heart symbol had no relation to the LGBTQ community whatsoever. Lawson and Rickerd were unpersuaded and continued to refuse to display the symbol. After multiple rounds of discussions and discipline, Kroger fired both women for refusing to comply with the dress code. After Lawson and Rickerd complained to the EEOC, the EEOC brought suit against Kroger….

The lawsuit was chiefly premised on the statutory requirement that employers exempt employees even from neutral, generally applicable workplace rules if (to oversimplify slightly),

The court began by noting that the sincere belief requirement could be satisfied, under the Court's precedents, even if the employer says the heart symbols were unrelated to gay pride, so long as the employee sincerely believed they were; and here, "Kroger concedes that Lawson and Rickerd sincerely believe that wearing the Our Promise symbol violates their religion." And the court added,

In any event, even if Kroger was right that the conflict question included an objective-reasonableness component, there's evidence in the record that would allow (but not require) a rational juror to conclude that the EEOC has proven prong one. That is, a rational juror could conclude that Lawson and Rickerd reasonably believed that wearing the multi-colored heart would communicate support for and promotion of the LGBTQ community…

Regardless of what Kroger intended for its Our Promise symbol to mean, Lawson and Rickerd object to being seen as supporting or promoting homosexuality…. [A] rational juror could go either way on that question.

At least ten (and possibly as many as twenty) other employees in the same store thought the Our Promise symbol communicated support for or promotion of the LGBTQ community…. [T]here was [also] no campaign to explain the meaning of the multi-colored heart to customers or other non-employees. Essentially, the meaning of the Our Promise symbol was left up to the imagination and interpretation of each particular customer who saw it. Indeed, there is evidence of non-employees concluding that the multi-colored heart was a pro-LGBTQ symbol.

The more people who saw the multi-colored heart the same way Lawson and Rickerd saw it, the harder it becomes to say that no rational juror could find Lawson and Rickerd's view to be reasonable. Given the number of people in this case who came to the same conclusion as Lawson and Rickerd did, the Court would be reticent to declare this view unreasonable as a matter of law.

The court also concluded that there was a jury question as to whether Kroger could have exempted Lawson and Rickard without "undue hardship." It cited the Eighth Circuit standard:

Any hardship asserted, furthermore, must be real rather than speculative, merely conceivable, or hypothetical. An employer stands on weak ground when advancing hypothetical hardships in a factual vacuum. Undue hardship cannot be proved by assumptions nor by opinions based on hypothetical facts. Undue hardship requires more than proof of some fellow-worker's grumbling…. An employer … would have to show … actual imposition on co-workers or disruption of the work routine.

And it went on to reason:

Kroger argues that accommodating Lawson and Rickerd (and potentially other employees) would have had a more than de minimis impact on Kroger's branding, business image, and customer relations. Kroger says that granting the requested accommodations would have "undermined the real meaning of the Our Promise symbol" by "giving credence to [the employees'] false assertion that Kroger intended the Our Promise symbol to promote LGBTQ rights" and "endors[ing] the religious belief." Kroger also says that accommodating Lawson and Rickerd would have "undermine[d] Kroger's commitment to customer relations and deprive[d] Kroger of free branding."

On the record in this case, a rational juror could find that accommodating Lawson and Rickerd (and potentially other employees) would have had no effect or next-to-no effect on Kroger's branding or business image…. [First, p]roviding a religious accommodation to an employee does not signal an employer's agreement with the employee's beliefs that created the need for the accommodation. Still, it is theoretically possible that someone could mistakenly consider Kroger's accommodation of Lawson and Rickerd to be the company's acknowledgement that its Our Promise symbol was related to the LGBTQ community. But that theoretical possibility is speculative. And it is even more speculative that enough people would share this view—and change their behavior because of it—to result in any hardship to the conduct of Kroger's business.

As to Kroger's concern about its "commitment to customer relations" being "undermine[d]," a rational juror could conclude on this record that the requested accommodations would have had no impact on the company's commitment or its employees' commitment to customer relations. One of Kroger's corporate representatives testified that it was "not important for [Kroger's] customers to know what Our Promise is." Instead, the Our Promise symbol was used to remind employees of Kroger's customer-service philosophy. Moreover, the multi-colored heart symbol was not the only way Kroger instilled customer-service values in its employees. There was the inscription on the back of the apron that Kroger made sure employees would see "when they put [the apron] over their head every day." And Maxwell posted signs in the employee break room that explained the Our Promise campaign, symbol, and Kroger's commitment to customer service….

Kroger also contends that it would have incurred additional financial costs because it "would have had to purchase new aprons for the associates who refused to wear the Our Promise symbol." But Lawson did not ask for a new apron at all. Lawson asked only that she be allowed to cover the multi-colored heart with her nametag. And Rickerd specifically offered "to buy another apron to ensure there is no financial hardship on Kroger." So, it certainly doesn't appear that Kroger would have incurred any additional financial costs had it granted the religious accommodations….

Kroger argues that the requested accommodations would have "caused a substantial disruption in Kroger's workplace and created potential liability for Kroger against harassment suits from LGBTQ employees." … Kroger certainly has provided evidence from which a rational juror could conclude that granting the requested accommodations would have led to disruption in the workplace. Primarily, that evidence consists of the disruption that did occur at the store around the time of the distribution of the aprons.

Essentially, Kroger's read of the record is that something akin to a civil war broke out in the Conway store. Kroger says that Lawson, Rickerd, and the other objecting employees had "discussions with their co-workers [that] led to most employees in the store knowing that [they] refused to wear the uniform because they regarded homosexuality and participation in the LGBTQ community as a sin." According to Kroger, this offended "members of the LGBTQ community and their allies" and "led to polarization within the workplace, which witnesses described as 'pretty divisive' and 'causing some controversy,' 'a major issue,' 'an uproar,' 'a split,' and impacting employee comfort." Peace only came, according to Kroger, once it was clear that Kroger would strictly enforce its dress code.

The problem for Kroger—at the summary judgment stage—is that its reading of the record is not the only plausible one. A rational juror could conclude that the extent and duration of the workplace disruption was significantly less intense. Maxwell (the Store Leader) testified that, while Lawson and Rickerd "did have some support from other associates," he "wasn't aware of any" "division" in the Conway store. Judy (on whom Kroger partially relies for its workplace-disruption argument) testified that he did not think it fair "to say this issue split the store." Indeed, if all reasonable inferences are drawn in favor of the EEOC, the only specific instance of a disruption in the workplace that Kroger points to—the red-marker-and-rainbow-tape incident—could be viewed as being entirely resolved in as little time as an hour or two.

Indeed, even if the workplace disruption was as bad as Kroger makes it out to be, Kroger would still not be entitled to summary judgment. As the EEOC emphasizes in its briefing, "it is the accommodation that must cause the disruption when asserting undue hardship." A rational juror could conclude that the workplace disruption had little (or nothing) to do with Lawson and Rickerd at all, much less with their requests to cover the multi-colored heart or buy a new apron without the multi-colored heart…. It is easy to conclude that the disruption would have taken place in the absence of Kroger accommodating Lawson and Rickerd. That's because the disruption did occur in the absence of the accommodations. As to whether granting the accommodations would have prolonged or reignited the disruption, there's little evidence one way or the other. So, a rational juror could find the prolonged-or-reignited-disruption thesis to be speculative.

Kroger's disruption argument extends beyond employee conflict. Kroger says customers learned about the employees' views of the Our Promise symbol and began to complain about the symbol themselves. The only evidence of customer complaints comes from the declarations of Maxwell and Assistant Store Leader Kaela Goodnight. Maxwell tells about a single interaction he had with a customer …. Goodnight's declaration is essentially the same, with the exception that she speaks of "multiple" interactions ….

This is so even though other people know why Lawson and Rickerd wanted an accommodation—i.e., that they don't want to endorse homosexuality. Whether such a view is good or bad, right or wrong, it does not constitute harassment or create a hostile work environment. Other concerns Kroger might have—such as the potential for intolerant discussions of LGBTQ issues among workers—are not directly related to the accommodation itself and can be addressed if or when they occur….