More details have been released about the attempted assassination of Justice Kavanaugh. From the Washington Post:

A man with a gun and a knife was detained by police early Wednesday morning near Brett M. Kavanaugh's Maryland home after making threats against the Supreme Court justice, according to federal officials.

According to a criminal complaint charging Nicholas John Roske with attempted murder of a federal judge, two U.S. Deputy Marshals spotted Roske get out of a cab in front of Kavanaugh's home at approximately 1:05 a.m. He looked at the marshals and then walked down the street. Not long after, Montgomery County got the call from Roske saying he was suicidal and came to kill Kavanaugh.
Montgomery County Police Department officers were dispatched and arrested Roske without incident while he was still on the phone with 911, according to the affidavit. In his suitcase and backpack were a Glock 17 with two magazines and ammunition, pepper spray, a tactical knife, a hammer, a screwdriver, a crow bar, zip ties and duct tape, along with other gear.

After his arrest, according to the affidavit, Roske told police he was upset over the leaked draft of an opinion that would overturn the constitutional right to abortion and also over the recent school shooting in Uvalde, Tex. He thought Kavanaugh would support looser gun laws. He decided to kill Kavanaugh and then himself, according to the police officer, thinking it would give his life purpose.

A reporter has also posted a copy of the criminal complaint:

NEW: Here's the federal affidavit against the man accused of trying to kill Justice Brett Kavanaugh. 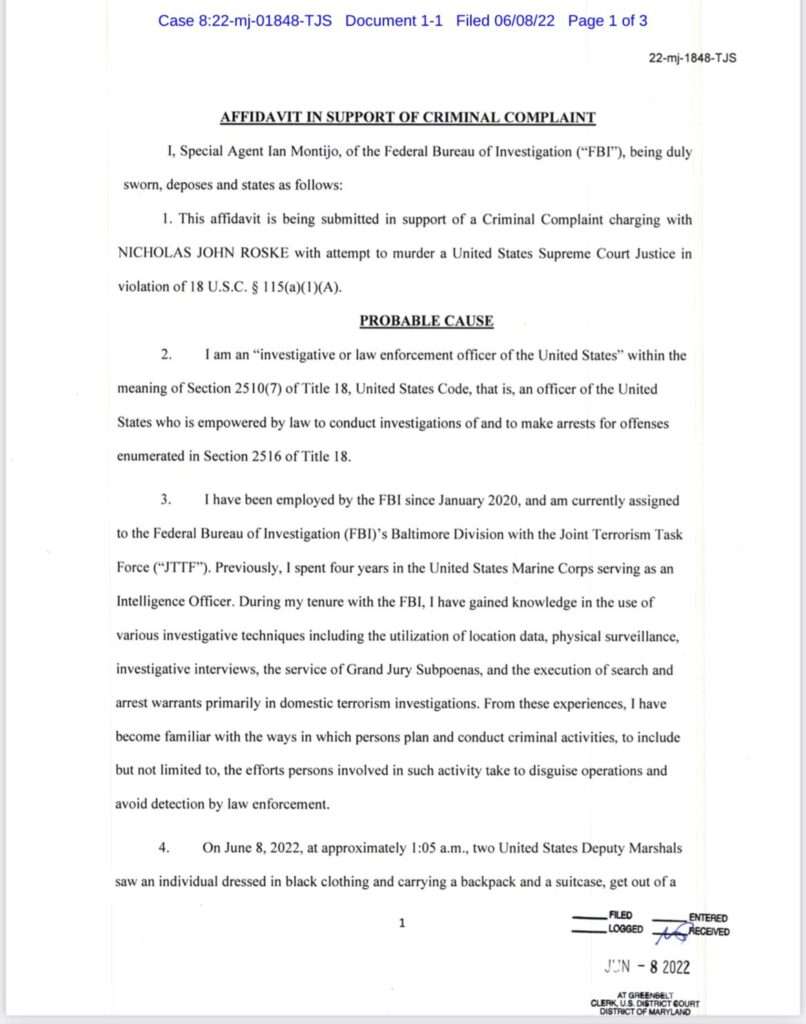 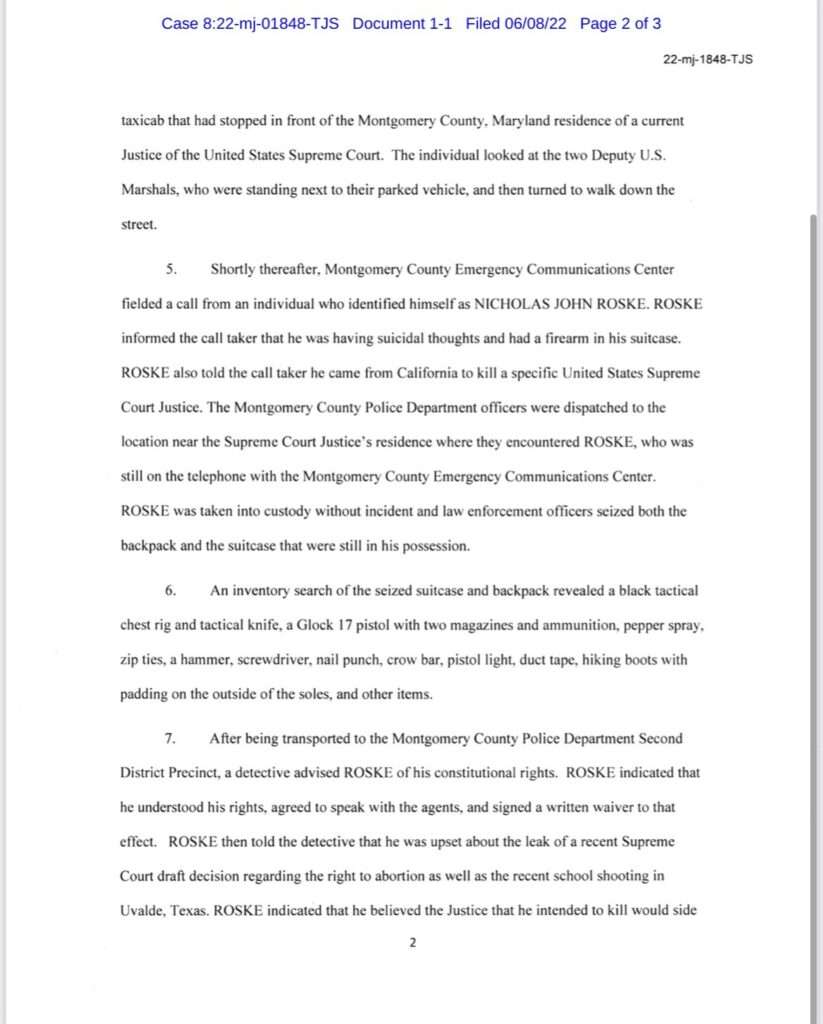 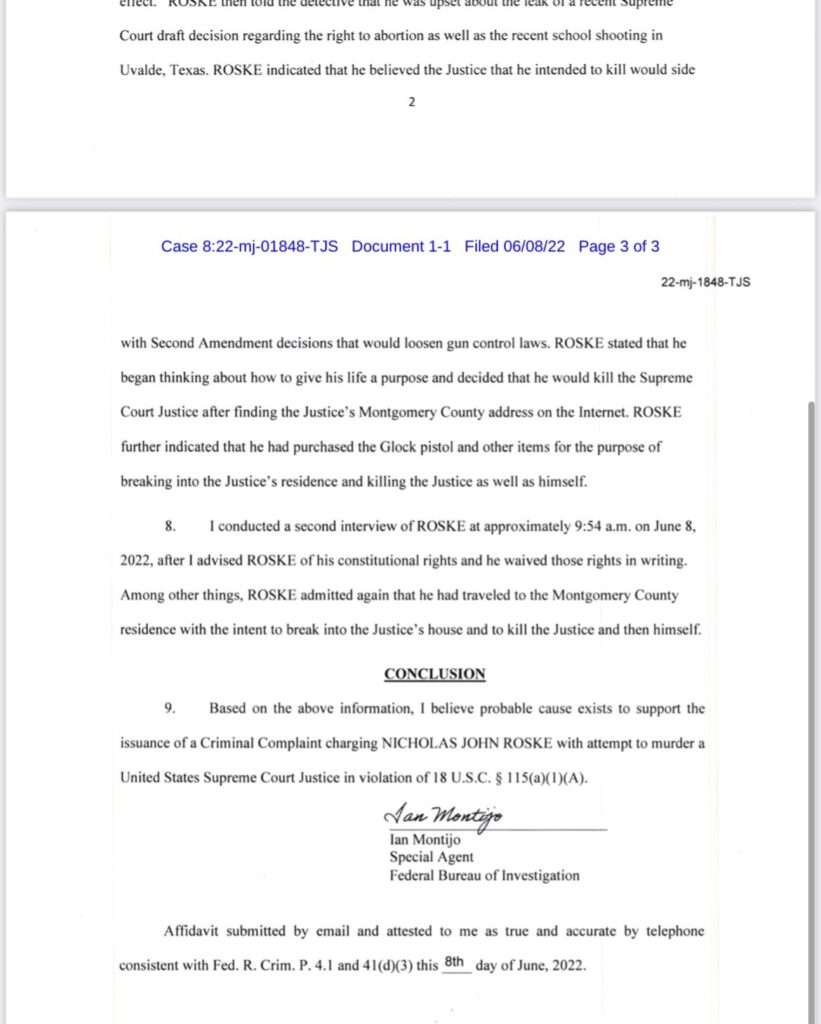 From this complaint, it seems that the defendant wanted to kill Kavanaugh to prevent him from casting decisive votes in Dobbs and NYS Rifle & Pistol.

ROSKE then told the detective that he was upset about the Supreme Court draft decision regarding the right to abortion as well as the recent school shooting in Uvalde, Texas. ROSKE indicated that he believed the Justice that he intended to kill would side with Second Amendment decisions that would loosen gun control laws. Roske stated that he began thinking about how to give his life a purpose and decided that he would kill the Supreme Court Justice after finding the Justice's Montgomery County address on the internet. ROSKE further indicated that he had purchased the Glock pistol and other items for purpose of breaking into the Justice's residence and killing the Justice as well as himself.

Release both opinions, right away. Do not delay another day.